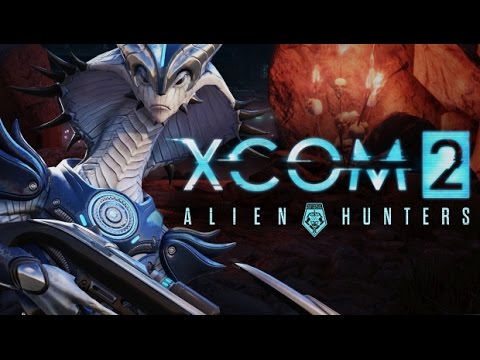 The last expansion for XCOM 2 was a solid upgrade to the seriousness of the base game, adding a lot of cosmetic options, but part of me felt like the community had already served this need and to better effect. This time around we are treated to something far more substantive.

All throughout the XCOM games, players have faced scores of foot soldier enemies. Certainly, there is a pecking order amongst your foes, and with some, like the the monstrous Sectopod or the ominous Gatekeeper, your team hasn’t faced the true face of the enemy; that’s what the XCOM 2 Alien Hunters expansion is all about.

She isn’t here for tea time.

This expansion is interesting, as it’s not a traditional DLC that tacks on to the game at the end. Instead, this story-driven campaign add-on laces directly into the storyline. This means if you have already completed XCOM 2, you won’t see these missions until you give the game another spin. However, if you haven’t completed the game, there is a good chance you’ll encounter these missions organically. I obviously won’t ruin the story components, but I need to warn you that if you found XCOM 2 difficult, battling the ruling caste takes it to a whole new level.

The Archon King is incredibly dangerous.

There are three new foes in store for your team — the Viper King, the Berserker Queen, and the Archon King. Vipers are already deadly, with their ability to grab soldiers from across the battlefield and pulling them further into danger, but the Viper King can do the same thing while he continues to call unlimited neophyte (2 health) Viper reinforcements.

The Archon King will pick you up and smash you into the ground.

The Berserker Queen doubles down on armor, can slam the pavement to knock your nearby soldiers unconscious, has an extreme amount of health, and can command nearby Mutons to great effect. Her rage will likely lead to the death of at least one of your teammates the first time you face her.

Rounding out this trio of terror is the Archon King. This flying menace uses the same staff as his lessers, but hits for a tremendous amount of additional damage. He is also capable of launching flechettes into the air and dropping them in the next round, instead of the three rounds it normally takes for them to land. Worse, he can also grab your team members and drag them into the air, and then smash them into the pavement, stunning or killing them.

The Viper King has less health, but far more reinforcements.

If all of their special powers and expanded health bars weren’t terrifying enough, all three of these enhanced enemies get a “Ruler Reaction” after every one of your attacks. This means they can take action, move, or unleash special attacks on a near-constant basis. If you can’t take them out fast enough, they also can summon a portal for a hasty escape, leaving you to face them again, and likely when you least expect them.

The single-shot Bolt Caster is a guaranteed hit weapon.

To face such overwhelming foes, the XCOM team has been working diligently on new armor and weaponry; some mundane, and some more fantastical. You’ll have four new weapons to research, and I recommend the Hunter’s Axe be high on your list, as it can be thrown from a distance, and its use doesn’t cost an action. The Bolt Caster is a crossbow that does incredible damage, offset by the fact that (when unmodified) it can only fire a single shot before requiring reload. The Shadow Keeper is a sniper’s dream, as it is a pistol that is guaranteed to hit and will immediately place your shooter back into concealment if the target is killed by your shot. The Frost Bomb grenade does exactly what you might expect, exploding and freezing targets where they stand. All of these weapons, however, have a huge drawback — if your soldier is killed in battle, the weapon is lost unless you can evacuate them from the battlefield.

A dead Viper King makes for a great suit of specialized armor.

While you can research the new weapons fairly easily, getting ahold of the three new armor loadouts is a far more daunting task. These incredibly powerful armor sets are constructed from the corpses of these ruling beasts. They offer up special skills and powers that flip the tables on your foes. I was going to describe how they are used in battle, but it’s better if they are a bit of a surprise. Suffice it to say that the corpses of these incredibly powerful beasts still hold plenty of power for you.

This expansion isn’t without a cosmetic bump as well. It’s a tad morbid, but as you grind through new enemy combatants, you’ll find their heads lovingly displayed in your new Hunter’s Lodge add-on for the Armory.

All in all, this update feels like the most complete DLC for XCOM 2 to date. There are some slight balancing improvements across the board, and some of the hitches during action sequences seem be smoothed out. Toss in the new weapons and armor, as well as a terrifying new trio of threats, and it makes this $9.99 add-on a must-have for any would-be Commander.

While you wait for this DLC to go live, check out this awesome launch trailer to see it all in action.