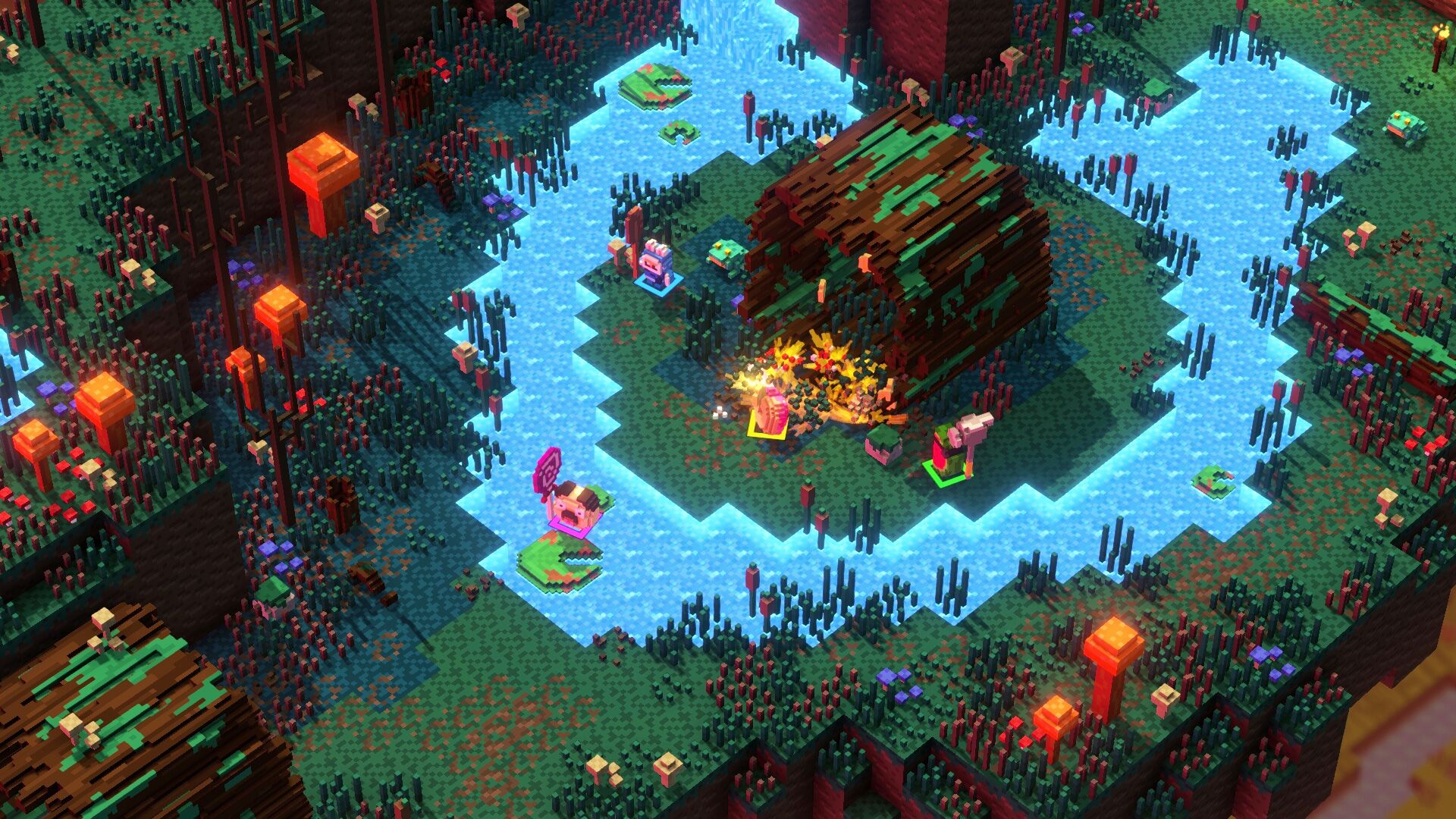 Couch co-op made a strong showing at this years PlayStation Experience, though few games did so with quite the same style as the adorable voxel indie, Riverbond. Oozing with charm, bright, blocky graphics, and easy to pick up gameplay, I grabbed a controller and dove into a four player co-op game to explore this destructible world created by Cococumber.

The game began as we each selected a pre-made avatar from a list which included a watermelon slice wearing a headband, a pink-frosted donut with sprinkles, a bug-eyed pug dog, and a bunny wearing a blue hoodie. Spawning inside a stylish voxel world, we proceeded to do what pretty much everyone does inside a demo: Ignore the NPCs and try to destroy everything in sight. Imagine our sounds of glee when we discovered the ability to chop, crush, kill, topple, or destroy pretty much everything inside the map. A swing of a sword felled trees, sending them crashing into pillars, which in turn crumbled and crashed to the ground, flickering briefly before fading from existence.

I’ve never been much of a fan of voxel art; something about the style has just never quite resonated with my personal tastes. Despite this, I found myself in love with the look of Riverbond. The art direction in this game really shines, making the style an asset, rather than a limitation. With a huge variation the size of various of voxel objects, rich details where appropriate, dust clouds, glittering water, and bright explosions, Riverbond’s style beckons you into a more childlike place with bright colors and Lego-like reminiscence. The fact that you can wreck it all, and literally watch the world fall with real-time physics, just makes it all the more delightful.

While I’ve logged more hours in pixel-era Zelda games than I want to recount, I’m far from the best at action-adventure games. Foruately, Riverbond has forgiving gameplay and actively works to keep everyone together. If you are killed by one of the hammer-wielding pig monsters, or you fall off a cliff, just wait a few moments and you’ll respawn. If you try to run off in the opposite direction your team needs to go, the game will transport you back with your comrades, helping reduce player friction.

The fun continued as we rampaged across several maps, where we activated fountains, which was apparently our mission, while destroying everything in our path, and collecting coins and more powerful weapons, such as an oversized lollipop. We laughed, we fell off cliffs, and we felled entire forests in the name of the greater good. Levels were a good size, not so long as to be overwhelming, but long enough that we felt we’d accomplished something at the end. Between levels, up to four players can hop in or out of the game, and swap out their avatars.This was great news, as we managed to unlock a new avatar almost every level.

The gameplay wasn’t overly challenging, but it also wasn’t easy, and was nothing short of addicting. Two of our players died multiple times, and while we weren’t necessarily worried that we wouldn’t be able take down the demo’s boss, we did let out victory cries when it died — slowly expanding and and blowing apart in a delightfully rewarding display. We walked away from Riverbond with smiles on our faces, chatting about how it’s destined to be the pick up, put down game for anyone who wants to relieve some stress by hacking-and-slashing their way across a map or three.

Riverbond will be coming to the PlayStation 4 and Steam in 2018, learn more about it, check out the reveal video above, visit Cococumber’s website, or check it out in the Steam store.