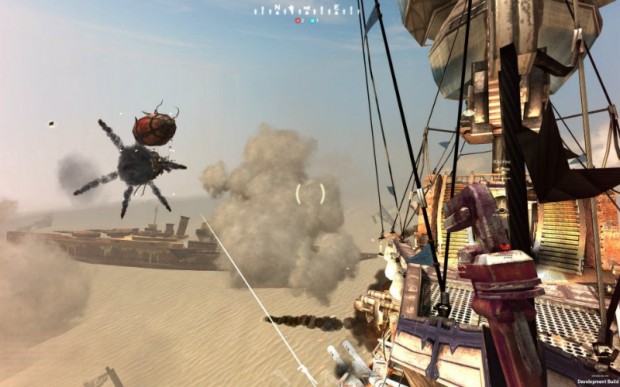 Guns of Icarus Online is coming to PS4, and players will not only get to experience a host of PvE co-op modes, but also not miss out on gunning for their buddies on Steam. Muse Games has implemented cross-play between PC and PS4, and after playing a round of co-op with a PC-playing companion, I’m amazed at how well they worked in tandem.

This addition comes alongside the implementation of several co-op modes, allowing up to 16 players to form up on four ships, fighting against oncoming forces of small planes, enemy airships and giant boss airships. Teams have to stay coordinated to keep from dying, but Guns of Icarus is fun even when everything is going wrong.

Ship battles can get frantic, with gunners calling out targets, engineers putting out fires and the captain steering the ship out of the line of fire.

Five modes are confirmed for co-op: Defend, Capture the Flag, Scavenge, Retrieve and Convoy. I only got a chance to play Defend, the survival-style mode, but fending off a multitude of ships and a giant boss ship with way more cannons than ours was a blast.

There’s also new content in the works, like new weapons and enemy types specifically for PvE. Also, Guns of Icarus Online will soon see the implementation of factions, a metagame where players can join factions, create alliances and compete for rewards. Factions will be implemented across both PvE and PvP, and enemy types in co-op may change based on faction events.

Guns of Icarus Online is shaping up to be a strong multiplayer title for the PS4, as it already was on the PC. It’s still in production, but you can stay tuned to the dev updates at www.gunsoficarus.com.