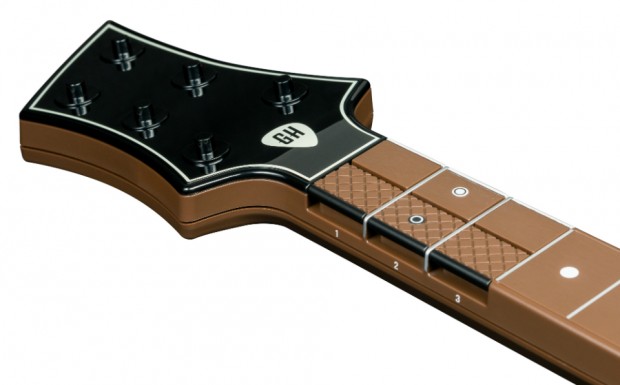 Guitar Hero Live isn’t the game you might be used to, and for a good while that had me worried.  You see, I’m a died-in-the-wool button-clicking Guitar Hero classic fan.  My family gets together every Sunday, playing our fake instruments.  It has been our Rock and Roll Fantasy for years at this point, and we were pretty comfortable with it.  But Guitar Hero is changing.  I knew I had to get my hands on the game to find out if such drastic changes would be for the better.

The first thing you’ll notice about Guitar Hero Live is that it is split into two distinct sections – Guitar Hero Live and Guitar Hero TV.  Guitar Hero Live might be where most fans are most comfortable, allowing you to live out your fantasies of stardom on a real stage, with authentic fans, and a huge array of music.  In Live you’ll step on the stage with a variety of bands (they swap out based on genre – there’s even an all-female rock crew!) and immediately begin to play along with highly recognizable tracks. What you won’t see here is color.

The new guitar that’ll ship with the game has changed the button layout dramatically.  Gone are the sequential five buttons color coded to gems on the screen.  Instead, there are now black or white note gems which coorespond to the two rows of buttons on the neck.  If you struggled with using your pinkie finger you’ll appreciate the layout as it only requires your first three digits.  Stacked one over the other, this feels more like a real guitar’s string layout, enabling fingering for complex and simple chords alike.  The on-screen prompts are familiar and intuitive, with black notes pointing up as those buttons are on top of the guitar, and white pointing down as those are the lower set.

As you play on stage, the crowd will react to your performance, as will your bandmates. Do well and you’ll find the fans singing along and your band jamming along with you.  Do poorly and the crowd will begin to jeer and throw things at you while you work to get your act together.  Your band mates will give you that “Why didn’t you come to practice?!” look and throw increasingly frustrated gestures your way.

Songs are presented in a genre-sorted fashion, grouped by archetypes like Classic Rock, Heavy Metal, and even pop.  The songs you see here are yours to select without any restrictions, allowing you to craft a musical journey as you see fit.  These concerts take place in Europe and America, with the crowd switching out and dressing more appropriately, along side area-appropriate weather. Expect rain (and mud!) when you head to England.

The fans are NOT happy.

Guitar Hero TV, on the other hand, is a whole different animal.  Not unlike tuning to one of the music channels (or at least the ones that still actually play music) you’ll join a rock concert or video already in progress.  With a simple button press you can immediately join in mid-stream and begin to play.   Do well and you’ll earn in-game currency.  Though still somewhat undefined, the system will essentially reward you for playing along with whatever happens to be streaming at that moment, or for taking on specific challenges.  These will give you tokens, allowing you to play a specific song at any time, rather than waiting for that particular song to play again.  This on-demand system may seem like microtransactions, but in practice it seems more like pay-for-convenience.  How fast you earn tokens and in-game currency is still being tweaked, but I didn’t see anything that made me feel like I should sound the alarm.  The team at Freestyle Games reiterated, often, that there is no paywall in Guitar Hero Live, and you can play every bit of content without ever paying real money beyond the asking price of the title and guitar.

What Guitar Hero TV does extraordinarly well is allow players to discover and play new music.  Since there is no “cost” to jumping in and playing any track on any of the channels, it allows you to experience new songs you might not have otherwise played.  As these channels change constantly, you can  discover new songs without the risk of spending a dime.

With a nod to the Call of Duty franchise, players can now earn new player skins and new highway art through challenges, in-game currency, or real money if you’d like to skip the process.

Guitar Hero TV is also where you’ll get the chance to play against your friends.  Using a matchmaking system, the game hooks you up with your friends or those close to you in skill level, and as you play you’ll see how you score against them in a leaderboard that runs on the side.  Running in real time, you’ll watch your climb up to a gold, silver, bronze, or honorable mention rank.  While you don’t have the failure mechanic in Guitar Hero Live or TV, this competitive aspect should keep players coming back to beat their previous scores – no more failing to succeed.

We took a moment to look at Guitar Hero Premium events.  While there are hundreds of songs with music videos, you’ll also get a chance to shred with your favorite bands in live concerts.  These events are time-locked, giving you only a limited amount of time to play it before it’s gone (possibly forever) from the channel.  These can be unlocked with real money, or you can play challenges to unlock them, such as getting three stars or better across three songs on any difficulty.  You’ll also be able to buy a block of time subscription which gives you access to all of the premium content for a chunk of time – perfect for that Guitar Hero party weekend you might have planned.  Pricing and such is still very much in flux, so we’ll have to wait and see how it shakes out.

Give your pinkie a rest

Another big change for the series is the removal of Star Power.  Replaced with Hero Power, you’ll now select across eight powers that grant various bonuses instead.  Since, again, there is no fail mechanic, it’s more about getting you through the song while earning a higher score and maximizing your fun.  These include the traditional double point power, but you can also clear the highway with another skill, hold your streak at it’s current value even if you mess up for a short time, and more.  If you are imagining Call of Duty scorestreaks again, you might be on to something.

The game does allow you to add songs to your library permanently, and you’ll need the in-game currency to do that.  As you play songs well, you’ll be rewarded with coins that you can spend to add a song to your library.  I’m not sure if it’ll still require plays at that point, but we’ll get clarification on that this week.

The biggest difference between this Guitar Hero and previous iterations is the way content is handled.  No longer is it a rush to download the newest tracks every Tuesday – instead content is added dynamically all the time.  They arne’t finalizing any numbers at this point, but the word “hundreds” was mentioned several times.  With Guitar Hero Live, you’ll have the chance to check those songs out whenever you wish, and at no real-money cost.  The songs all stream to your console, so there isn’t even a need to fill up your precious hard drive space with your favorite tracks.

Jam along with your favorite bands on Guitar Hero TV

It’s very clear that Guitar Hero has changed and iterated here, and not just with the controller.  Guitar Hero Live has created an ecosystem – something that can be changed, tweaked, and adjusted as fans ask for new features.  But here’s the million dollar question – how does it play?

I went hands on with the game and the new guitar and tried out a track from Echosmith.  The song immediately felt intuitive, and I was able to not only jump in and play, but after a few moments I was able to jump the difficult up to the second highest setting.  Three finger chords appeared, but it felt natural and very accessable.  Certainly, higher difficulty tracks will be more of a challenge, but there is no doubt that the game has iterated on the genre once again.  Stay tuned as we get more hands on time with the game for our continued impressions.