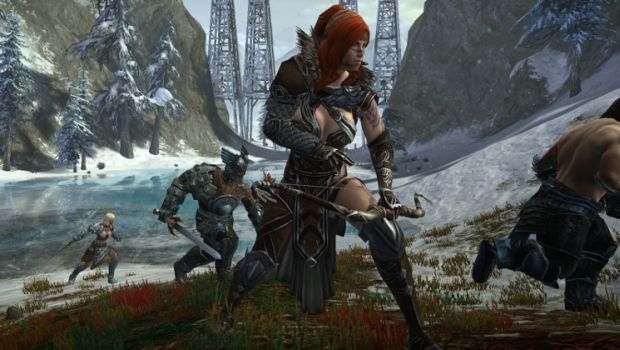 Guild Wars 2 is one of the few MMOs that handles player content with a great deal of care. They provide an incredible amount of content for the low, low price of absolutely free. We sat down with the ArenaNet team to talk about Season 2 of their Living World expansion. For those who missed Season 1, or need a quick refresher, over the course of 25 epic story additions, ArenaNet introduced a great conspiracy where numerous attacks on Tyria were being perpetrated by a woman named Scarlet Briar – a crazed and psychopathic Sylvari that clearly went off the deep end. Her psychotic attacks culminated in an all-out assault on the major city of Lion’s Arch, all but burning it to the ground as she unleashed her massive airship drill on the ground below. During the final cutscene, Scarlet cursed the land, unleashing a far greater threat into the world. Even in death, she is incredibly dangerous.

Season two of the Living World picks up directly after these events. Lion’s Arch is in ruins, and this unknown threat rises in the west; Scarlet has unleashed an Elder Dragon. Taking place after the culmination of the player’s personal story, Season 2 will continue the plot arch from Season 1, bringing old friends and new foes. The folks at ArenaNet didn’t want to spoil any of the story elements (and rightly so), so we focused more on some of the awesome technical advancements this new expansion will bring.

The ArenaNet strategy has always been to release feature packs to add things like the recently integrated megaserver, new traits, and other mechanical changes, reserving the expansion packs to expand the story for the game. Starting in Season 2 and moving forward, the developer will introduce a DVR-like function called “Story Journal”. This mechanic will allow players to experience these seasonal events whenever they’d like, even though they were originally designed as player-driven world events to be played in real time. Additionally, players will be able to replay the season, restarting it to experience it with friends might not have played recently or are just starting out. Best of all, the process is completely automatic – when you log in after Season 2 launches, it’ll automatically download and be stored for whenever you reach level 80.

In addition to the Story Journal, the game will now feature achievements for each episode, not just the meta achievements in Season 1 or the main game. This means you’ll be able to tackle objectives like “Don’t let any NPCs die” or “Don’t get downed” as secondary objectives during replay. You are also free to try it out on ‘hard mode’, or play it again with another character build at any time. The team is making the commitment to go back and integrate Season 1 into the Story Journal at some point in the future as well, so don’t think you’ve missed out if you didn’t catch Season 1 when it was live.

I praised the open and engaging world of Guild Wars 2 when Victor Grunn and I reviewed it, and free expansions like Living World are just another example of ArenaNet’s steadfast commitment to quality.  You can hit the video above to see a quick preview for the newest season. Season 2 of Living World is just around the corner though – it’s set to launch on July 1st, 2014.  Welcome back to the world of Guild Wars.