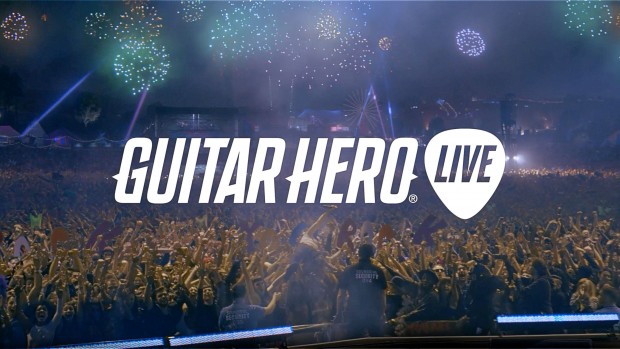 This past week I was invited to go and play FreeStyle Games’ new installment of the Guitar Hero franchise. The studio behind the DJ Hero series is bringing back Guitar Hero in very new and exciting ways. Guitar Hero Live features new modes, ways to play, and a beautifully redesigned controller. I have not been this excited for a music game for many years, but after some hands-on time, Guitar Hero Live has brought back my passion for the series, and has shown me how bright the future can be for the next generation of music games.

Arguably the biggest feature is the first-person, live-action gameplay. This mode throws you into the game in one of the most immersive experiences I have ever had as a gamer. Standing in front of  an audience that reacts to how I am playing was not only exhilarating, but also had a genuine feeling of being a rockstar that previous music games have never been able to capture. The details in this mode are also astonishing; you can actually see the anger and disgust in people’s faces as they are throwing things at you for failing at the song. If you are rocking out, however, the crowd gets excited and sometimes will jump on stage to try to dance with you. Every detail of the live-action experience has been fully thought-out and playing in front of a festival with a hundred-thousand people was not only extremely immersive and fun, but is done so well that it never comes off as gimmicky.

Another feature being launched alongside GH Live is Guitar Hero TV, which is essentially a 24-hour music network in which you play alongside music videos. Coming into the preview event I was a little hesitant on how well GHTV would work, but after a couple hours playing it, I can say it is a fantastic feature. It lets players to jump into various genres of music and play along with the songs’ music videos, and allows you to play against people in a never-ending battle for high scores. The developers have also stated that GHTV will be continually updated, giving a constant stream of new music and experiences. Although Live mode is the big feature being launched, Guitar Hero TV seems to be set up as more of a platform rather than a game, and I feel it will be what keeps people coming back to Guitar Hero.

As you play GHTV, you earn in-game currency that will help you acquire a variety of new content. You can personalise your player card and even your note highway, allowing you to make the game more personal and give it a different look. It also allows you to unlock premium content that lets you play along with real concert footage. You can also purchase Hero Powers and boosts that increase your ability to rank up with the end goal to reach “Hero Status.” FreeStyle Games is really setting Guitar Hero TV up to keep players playing and always competing to get new content, get higher scores, and have fun in new and refreshing ways.

The true star of the show, however, is the newly redesigned controller. When we arrived at the preview event, one of the developers stated that the new controller was easy for beginners but hard to master, and after some time with the new guitar controller I can see he was perfectly correct.

The new controller has six buttons, three on top and three on bottom. For beginners, you only use the bottom three buttons which allows a simple and easy to play design. Medium-level players play with two-row combinations that actually mimic real-life guitar chords. Finally, advanced-level players have a new challenge in creating complex chord shapes and combinations to bring a new level of difficulty and realism Guitar Hero has never seen before. I had to completely retrain my brain after years of Guitar Hero to play on the new controller, and it was the most rewarding experience I have had since the first Guitar Hero was released. The new controller made me excited to play  again, and I felt like I was learning and experiencing a new game, rather than being able to jump in and play the hardest difficulty as I have been able to in previous installments. I left the event with a new love and new respect for not only the game, but for the future of the series, all due to the new guitar controller setup.

Although this time around the only instruments are the guitars, you can also use vocals. Guitar Hero Live allows you to plug in a USB mic and jump into the game. Although I got little personal experience with this feature, it does seem to work well and allows another layer of gameplay. The vocals seemed to be very responsive, and work in a way that you do not have to have the prettiest voice, but rather just be able to hit notes and follow the tones of the song to be successful. It feels like a solid add-on, and a great way to involve more people to play.

The only potential downfall I found of the whole game was the tracklist. Between what I have played and what has been released so far, the tracklist is extremely varied, meaning metalheads or indie lovers may only have a couple songs they are excited to play. Being so varied allows the developers to reach more people, but at the same time limits how much they can give to individuals and the players’ specific tastes.  Everything from The Black Keys to Queen and Rage Against the Machine are represented here. I hope the tracklist has more than what has been released so far, because the modes and controller have been redesigned in such a beautiful way that I hope the music selection allows me to continue to have fun without only playing the four or five songs I love. One thing that has alleviated my fears, however, is GHTV and the potential that brings to keep updating Guitar Hero with new songs and genres that will help the game evolve.

Guitar Hero Live is not resurrecting the franchise, but is rather reimagining it in fun, unique, and refreshing ways. It has brought back my excitement towards music games and I can not wait until October 20th to play through the full game.