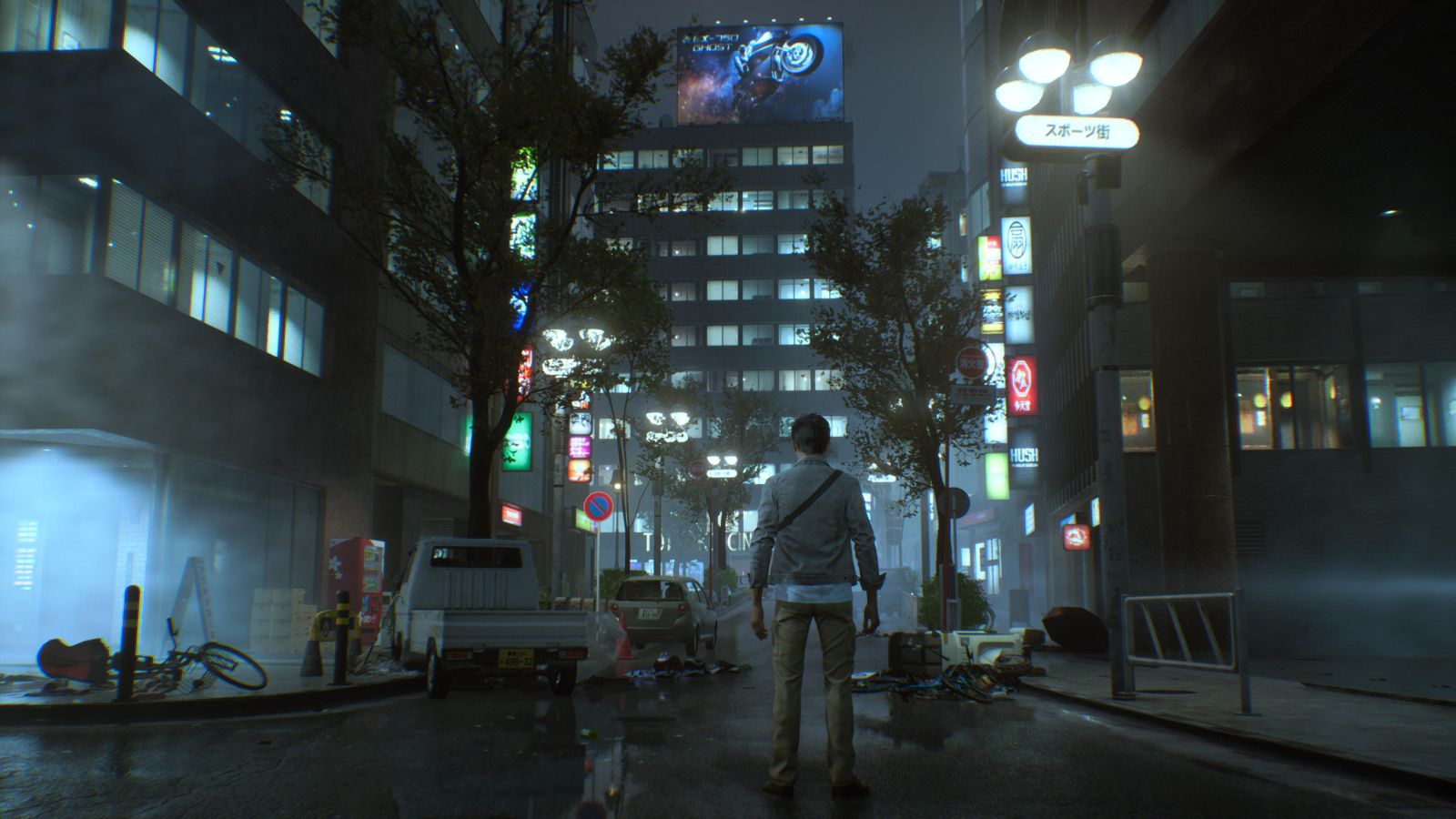 Tango Gameworks’ Ghostwire: Tokyo is unlike anything I’ve ever played. At once trippy, yet horrific; funny, yet tense – it is a unique blend of genres that all meld to create one of the most creative first-person games in recent memory. While I’ve only had the chance to experience the first two chapters, if they are any indication of the rest of the game then players are in for a wild ride.

Two chapters may not seem like much to base a game off of, but Chapter 2 can take hours to complete. Filled to the brim with side missions, places to explore, areas to cleanse, enemies to fight, and mechanics to learn – Ghostwire: Tokyo wastes no time setting players free in its glorious sandbox of horrors. The game is both a FPS and an RPG, seamlessly combining features from both genres to create a cohesive and addictive gameplay cycle.

For fear of spoiling the story, I’ll just provide a quick summary of the setting and leave it at that. You play as Akito, recently inhabited by a spirit named KK, and together you set out to save Tokyo. Tokyo was recently purged of all inhabitants due to the vanishing – a mysterious event seemingly spearheaded by an equally mysterious antagonist, which KK is set on defeating. Akito, mainly along for the ride, agrees to help in hopes of also taking care of an issue of his own. The setting is simple but gives you a gloriously open Tokyo to explore either from the ground or the building tops, chock full of secrets to uncover and items to collect. 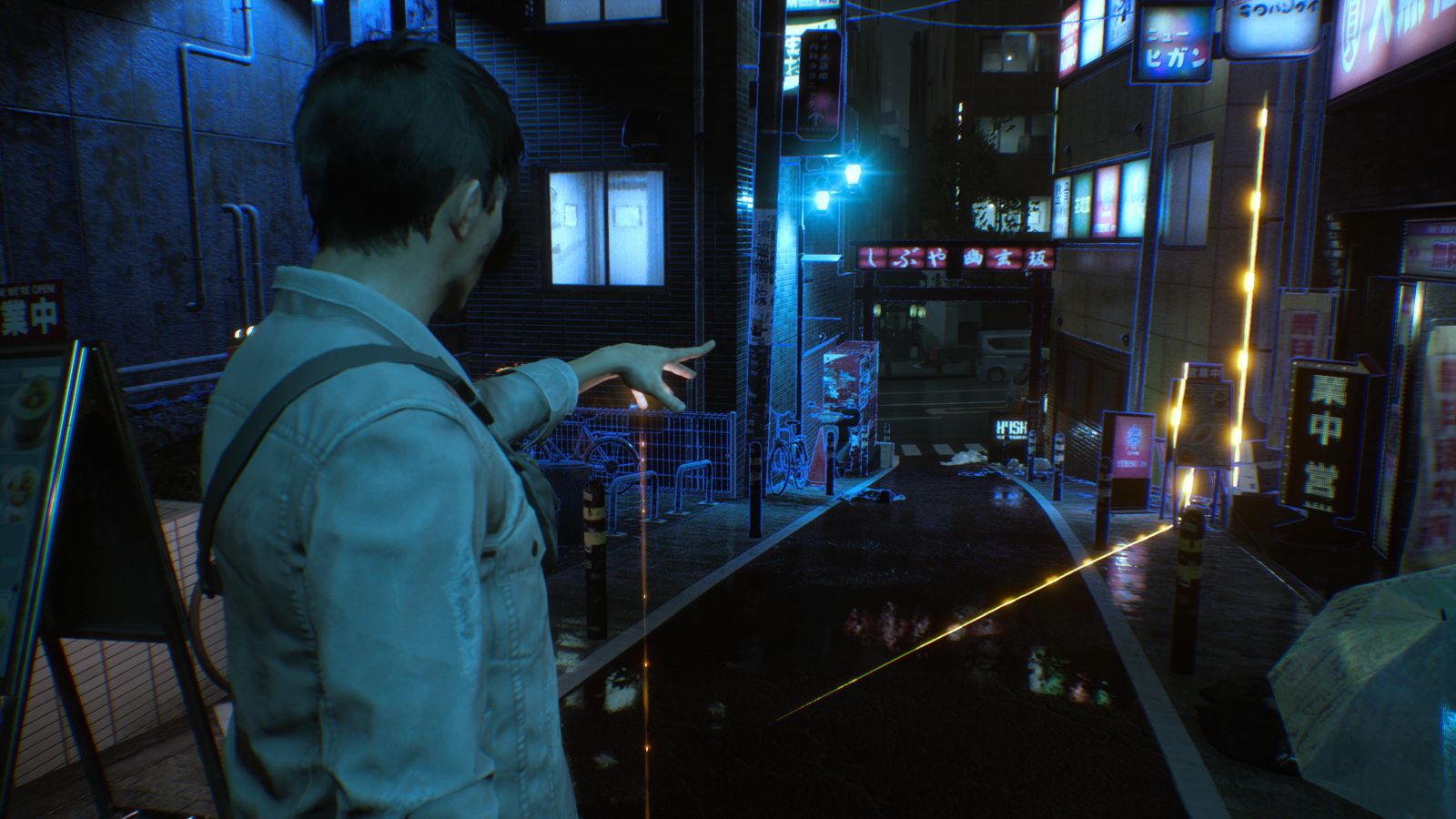 Ghostwire: Tokyo is Japanese-inspired and Japanese made and the developers of Tango Gameworks urge players to experience the game with the original Japanese voice acting, although there is an English option for those who may want it. That Japanese authenticity helps to bring Tokyo and the spirits, enemies, items, and story beats you encounter to vivid life, allowing players to fully immerse themselves into the world and to learn about the culture at the same time.

Gameplay is easy to learn, hard to master, and surprisingly in-depth. What may look like a simple FPS – albeit featuring unique shooting mechanics – from the outside, quickly shows its depth as you progress, collect XP, obtain new skills and weapons, and learn new abilities. Akito has a surprisingly large repertoire of attack and defense abilities at his disposal, all of which unlock from the addictive cycle of defeating enemies, saving spirits, and completing missions.

Akito attacks by using the abilities imbued to him by KK’s possession of his body. His primary method of attack is a colorful burst of energy from his fingertips, called Ethereal Weaving, which boasts the ability to be infused with different elements. All attacks require SP, which can be gained by defeating enemies or by destroying objects coated with crystallized ether in the world. No need to worry about constantly running low on ammo, ether is plentiful and you’ll rarely be far from a way to restore your SP. 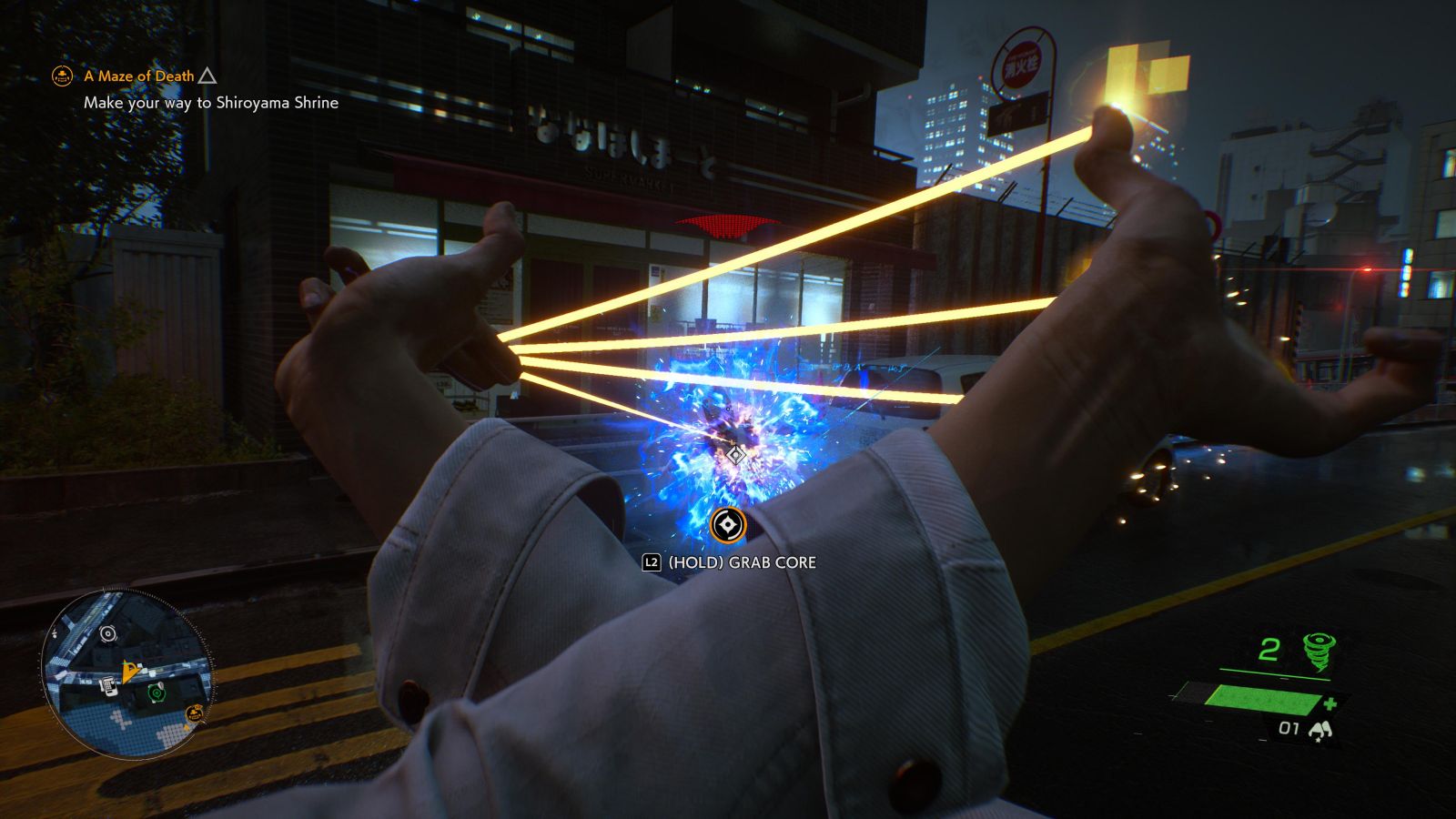 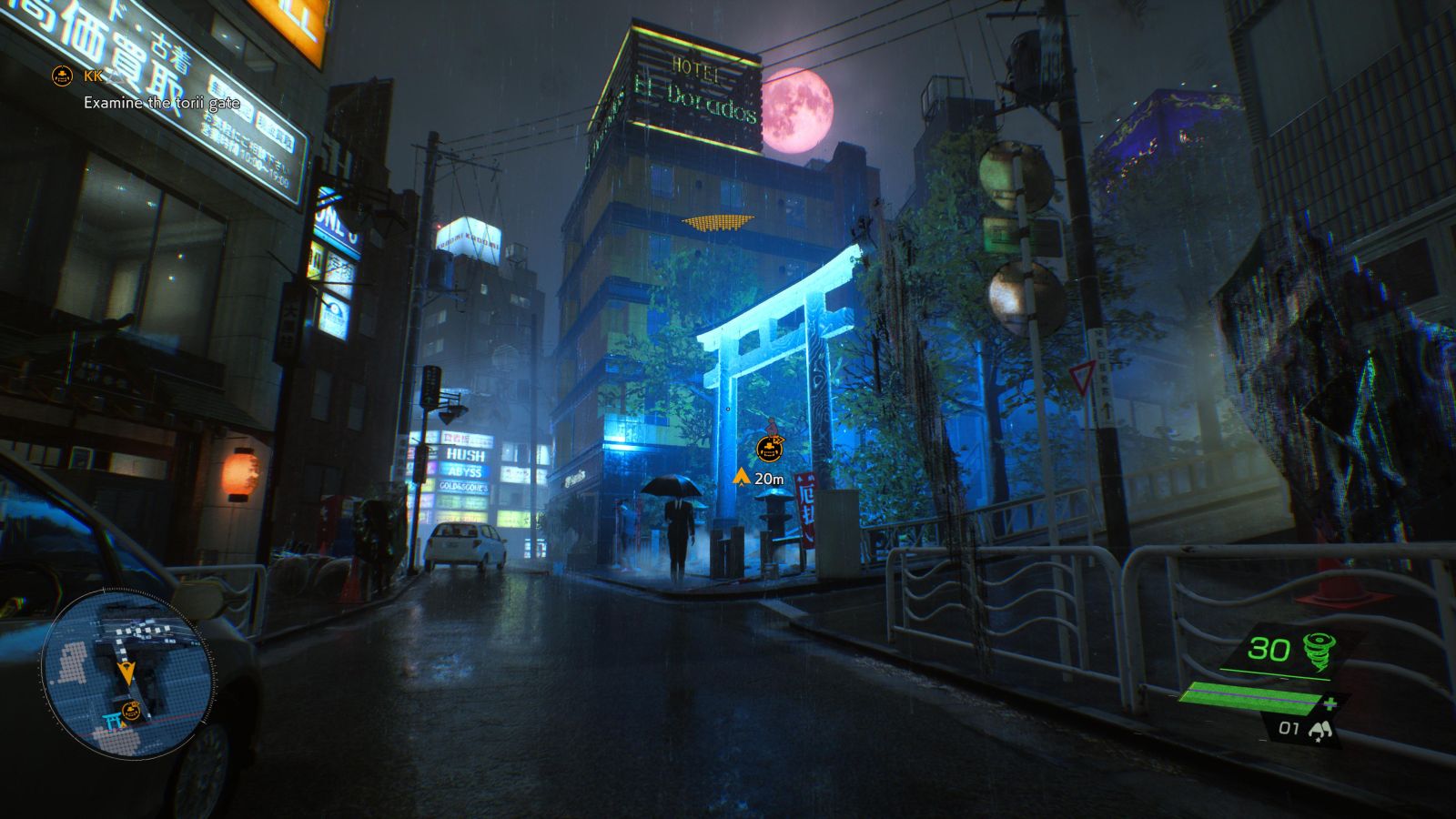 To attack, simply press R2, pressing L2 will toggle assisted aim, and pressing L1 allows Akito to create a bubble shield to fend off attackers. L3 allows you to run, while R3 functions as a strike attack used to fend off enemies or to destroy objects in the world. You won’t always want to face enemies head-on so sometimes stealth is the best approach, especially when needing to weed out large groups. By pressing O you can crouch and sneak up on an enemy and then perform a quick purge by pressing L2, instantly killing them. Eventually, you’ll become equipped with a charged attack, which is readied by holding down the R2 button. Holding R1 will bring up a radial dial of your abilities while quickly pressing R1 will toggle abilities.

Enemy groups can come at you quickly, with a large variety of enemy types forcing you to make use of all your skills. Some spirits may run at you quickly, flailing their arms, while other enemies walk slowly and deal greater damage or attack via projectiles. Taking down groups can be challenging, but with patience, you can quickly charge up attacks, switch between enemies, and even use a spirit lasso to pull out an enemy’s core to quickly defeat them. 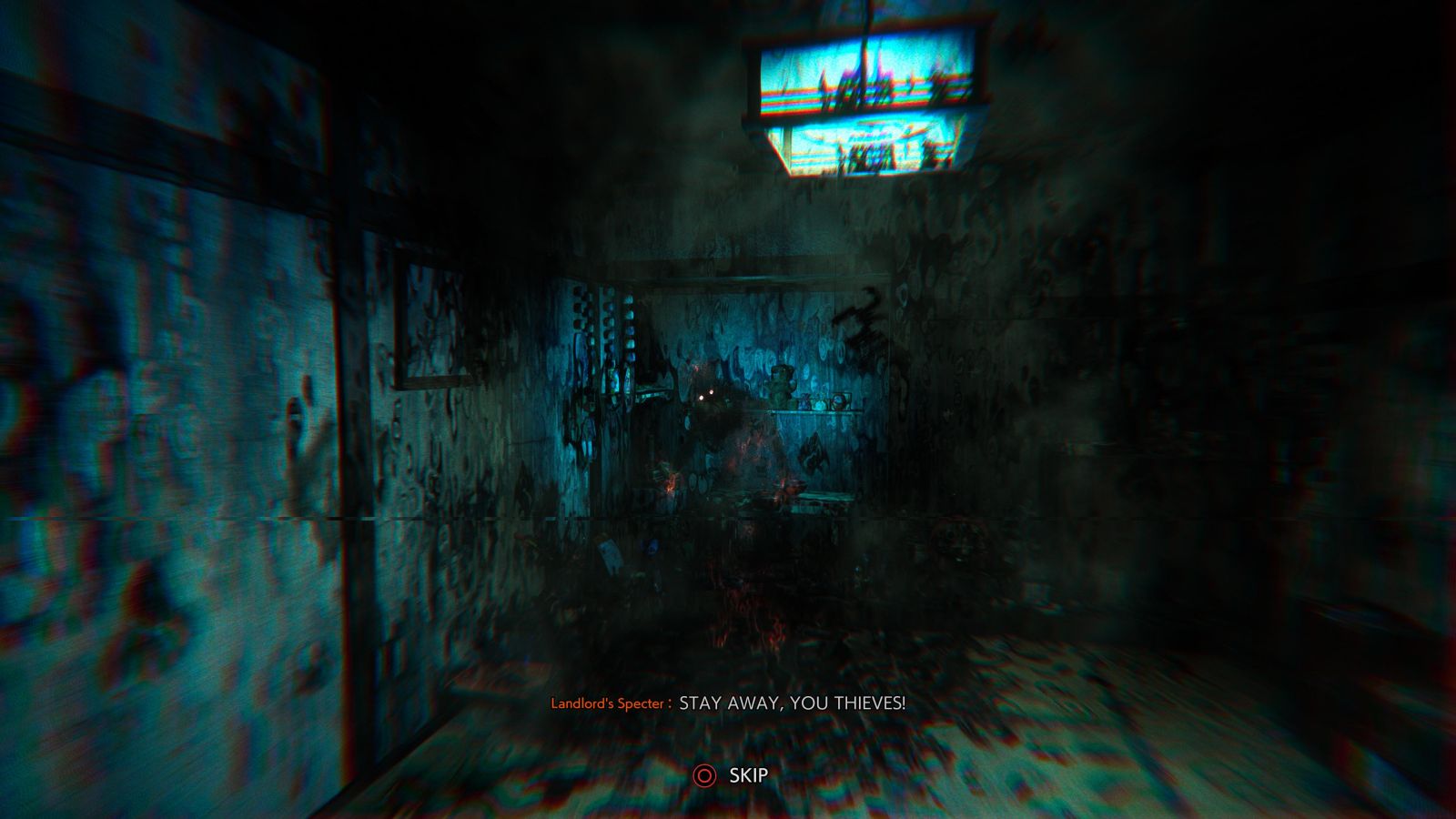 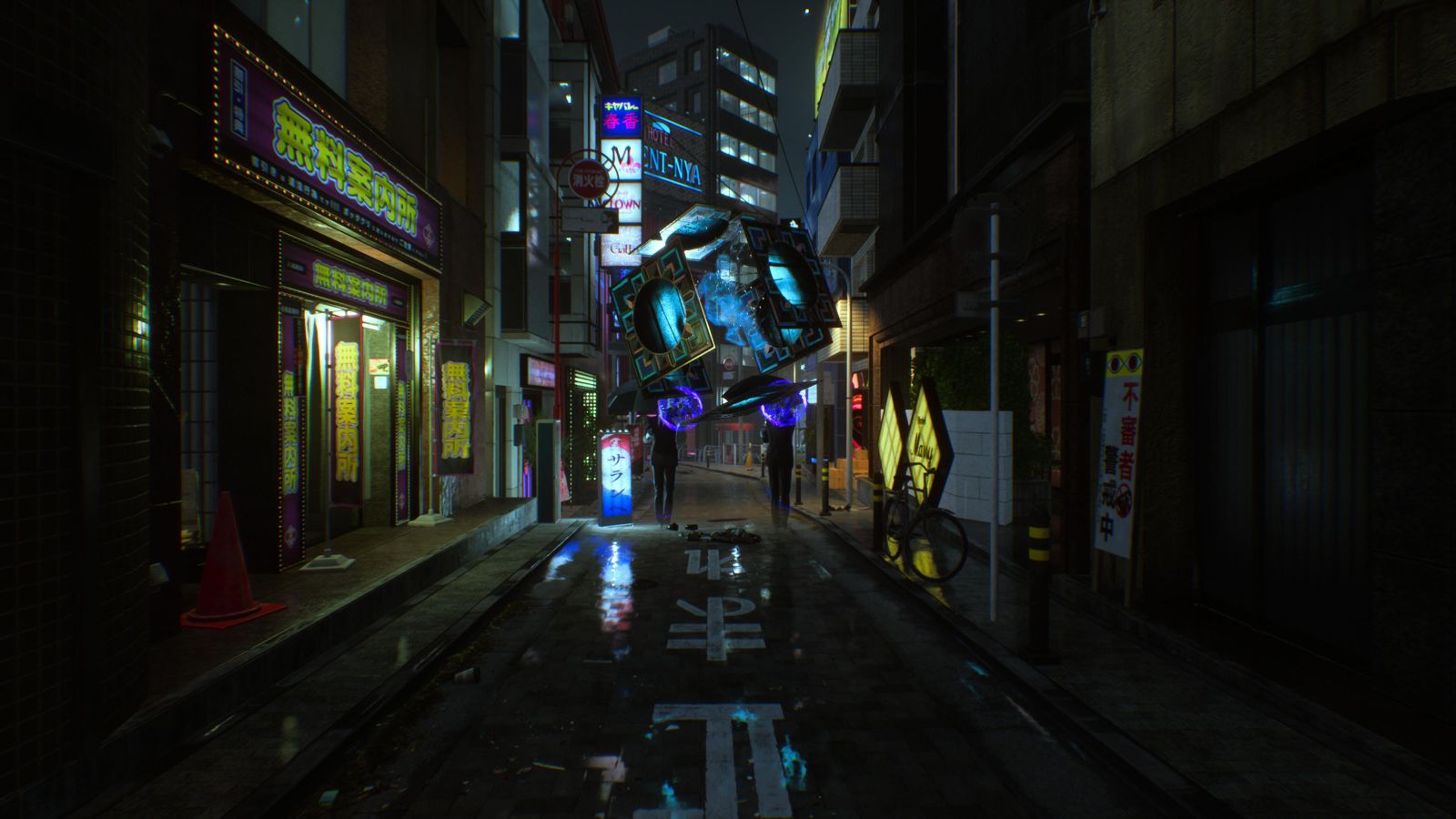 Nearly everything you do nets you XP, including defeating enemies, completing missions, and helping spirits via side quests. Earn enough XP and you’ll gain a level. Each level increases your maximum HP and awards Spirit Skill points that can then be used to unlock new skills via the Spirit Skill tree paths. There are over 30 abilities, 21 Ethereal Weaving skills, and 16 equipment updates to gain. To further complicate leveling up, not all skills are available to you immediately. Sometimes you may just need to unlock a lower skill first, but other times you will need Magatama, which is gained from specific events during the game, to unlock a new branch of abilities.

There are a ton of items to find throughout the world, including a variety of food which can be used quickly by pressing triangle to restore health in a pinch. Each food or drink item you consume will give you a small permanent boost to your max HP. Aside from food items, there are a ton of files, detailing the lives of individuals who disappeared during the vanishing. These help flesh out the world and may lead to information further explaining the characters you meet during side missions.

Speaking of side missions, they are plentiful and rewarding. Nearly each mission begins via finding a distressed spirit and speaking to them and then helping them pass by completing their unfinished business. Unlike side quests in many games, these never felt like filler to me – I enjoyed learning about these individuals and completing their varied storylines. Not only do these missions provide a break from the main quest, but they award XP and will help greatly in preparing you for the challenges of the main quests. Side missions automatically pop up on your map and can be accessed at any time once they become available.

Another way to gain XP is to absorb spirits and lead them to salvation. To absorb spirits you must have a katashiro. Katashiro can be purchased or earned by cleansing torii gates, which in turn clear the fog from a particular area making it safe to explore. Anytime you stumble upon a lost soul in need of help you can hold up a katashiro and absorb the soul. To lead the spirits to salvation you must find a phone booth and send the spirits via a special mechanism to an individual on the other side. Sure, it sounds goofy – but it works in the setting and quickly becomes addicting to locate as many souls as possible. Delivering spirits to the phone booth will earn you XP based on the number of spirits you had on hand. After you unload the spirits then you are free to use your katashiro again to absorb new spirits. There are hundreds of spirits scattered throughout Tokyo and finding them will add a ton of longevity to the game, not to mention help you acquire new skills quickly.

Akito is imbued with multiple abilities, many of which are handy for uses aside from fighting. Akito can traverse the air by grappling onto Tengu and launching himself to the building tops. From there you can use KK’s abilities by holding down X after a jump to glide between buildings. Akito is also equipped with a detailed map, which shows any found locations, points of interest, missions, and more. Via the menu screen, you can also reach a database detailing the characters, files, and tutorials you’ve uncovered. This updates continuously as you progress. From the map screen, you are also able to fast travel between various points of interest, normally Mekomata shops or shrines. 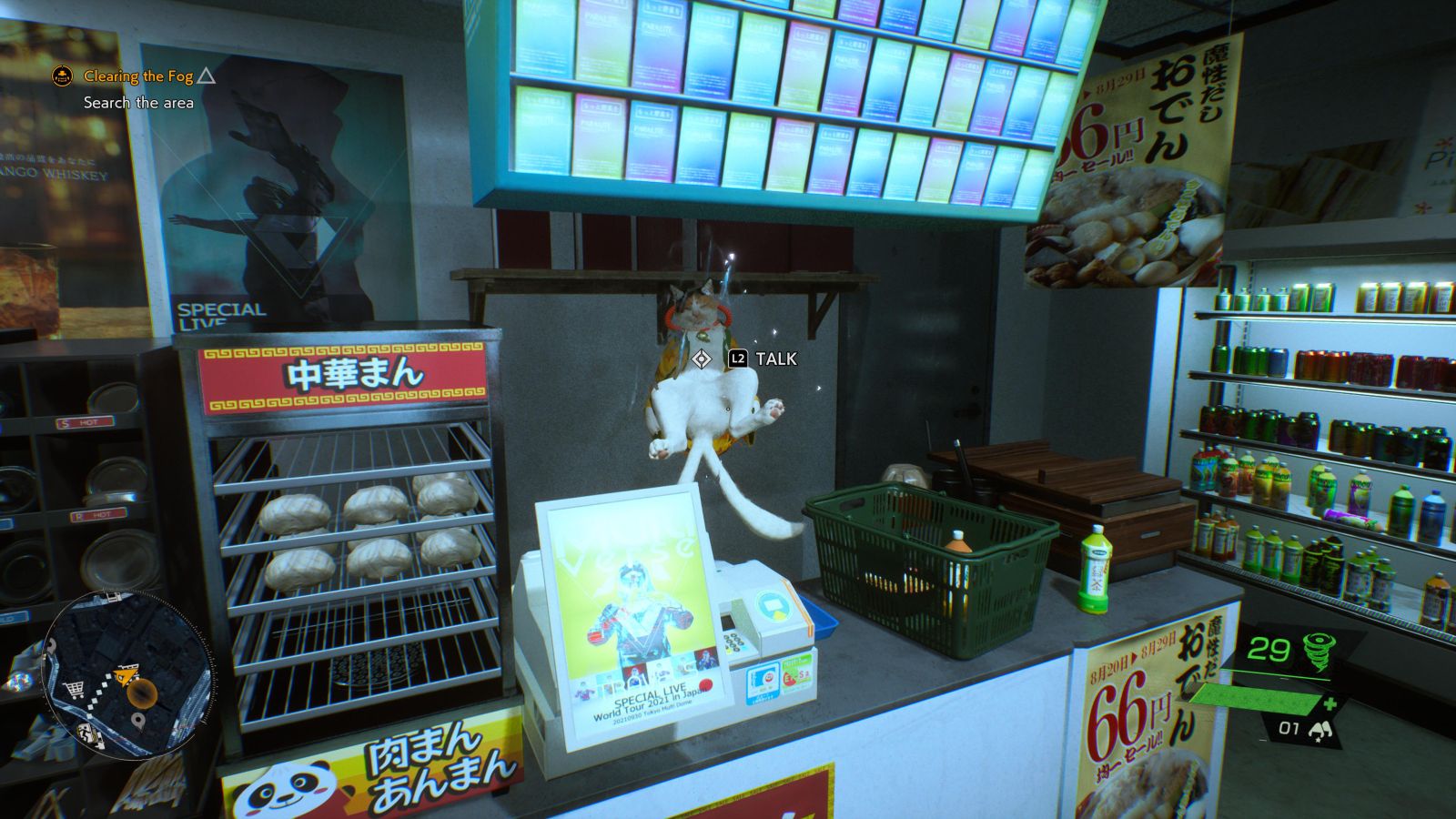 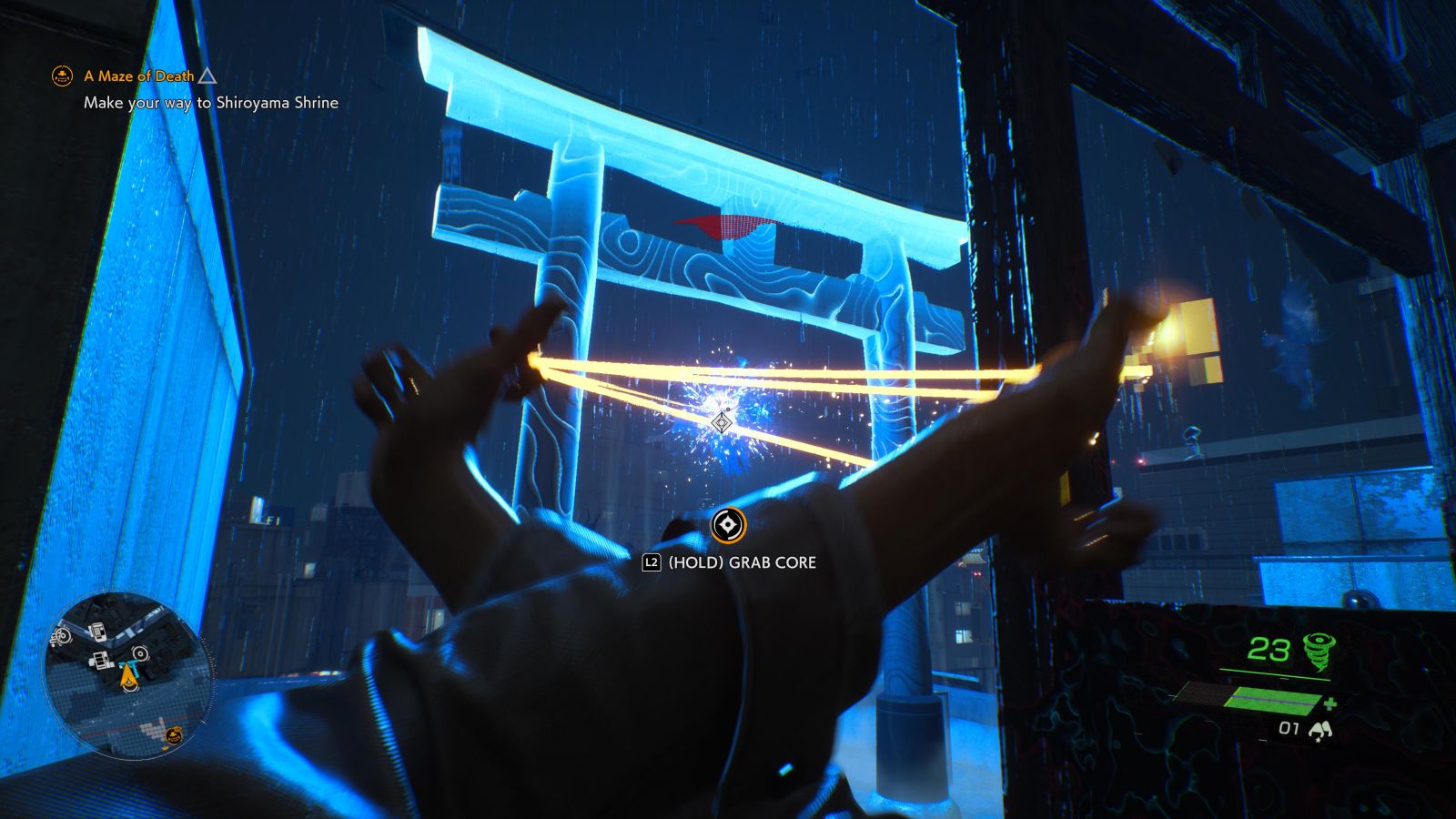 Mekomata shops are run by cats, which will sell you items and some will even pay you for acquiring rare items. When you stumble upon a cat in need of particular materials you can select those items you’re interested in acquiring from their menu which will then cause that item’s approximate location to be marked on your map.

During your journey, you’ll encounter seals that must be broken or enemies that must be exorcised. To do this you must use the right control stick to mimic the seal pattern shown on screen and then press L2 and R2 together to create a burst of energy either finalizing a seal or destroying it. These seals are an interesting mechanic and one that is used to great effect in a few particular missions.

There is almost too much in Ghostwire: Tokyo to cover in a simple preview, Jizo statues which raise your max SP; omikuji, or fortunes, which provide temporary effects – which are sometimes good, but just as likely to be negative; spectral food which provides various boosts; spectral vision which shows you the locations of nearby items and enemies, and more. The game is chock full of creative ideas and fresh mechanics. These are items which will be covered in more detail in the review.

There is one last thing I’d like to touch on: Ghostwire: Tokyo’s great use of many PS5 features, in particular the controller’s haptic feedback and speaker. The game features 3D audio, so playing with headphones is recommended, but aside from that the controller helps mimic the environment for added realism. Most notably is when you’re exploring Tokyo during a storm you’ll hear the splashes of rain all around you and feel the droplets via haptic feedback in your controller. It’s a subtle effect that adds tremendously to the gameplay and a feature I hope more games will implement in the future.

Though only four hours into Ghostwire: Tokyo, I can say that it feels fresh and unique, boasting a combination of genres which work to constantly provide you with a sense of momentum and accomplishment. I’ve greatly enjoyed the first two chapters and can’t wait to explore Akito’s journey further. Be sure to check out Gaming Trend closer to release date for our full review.