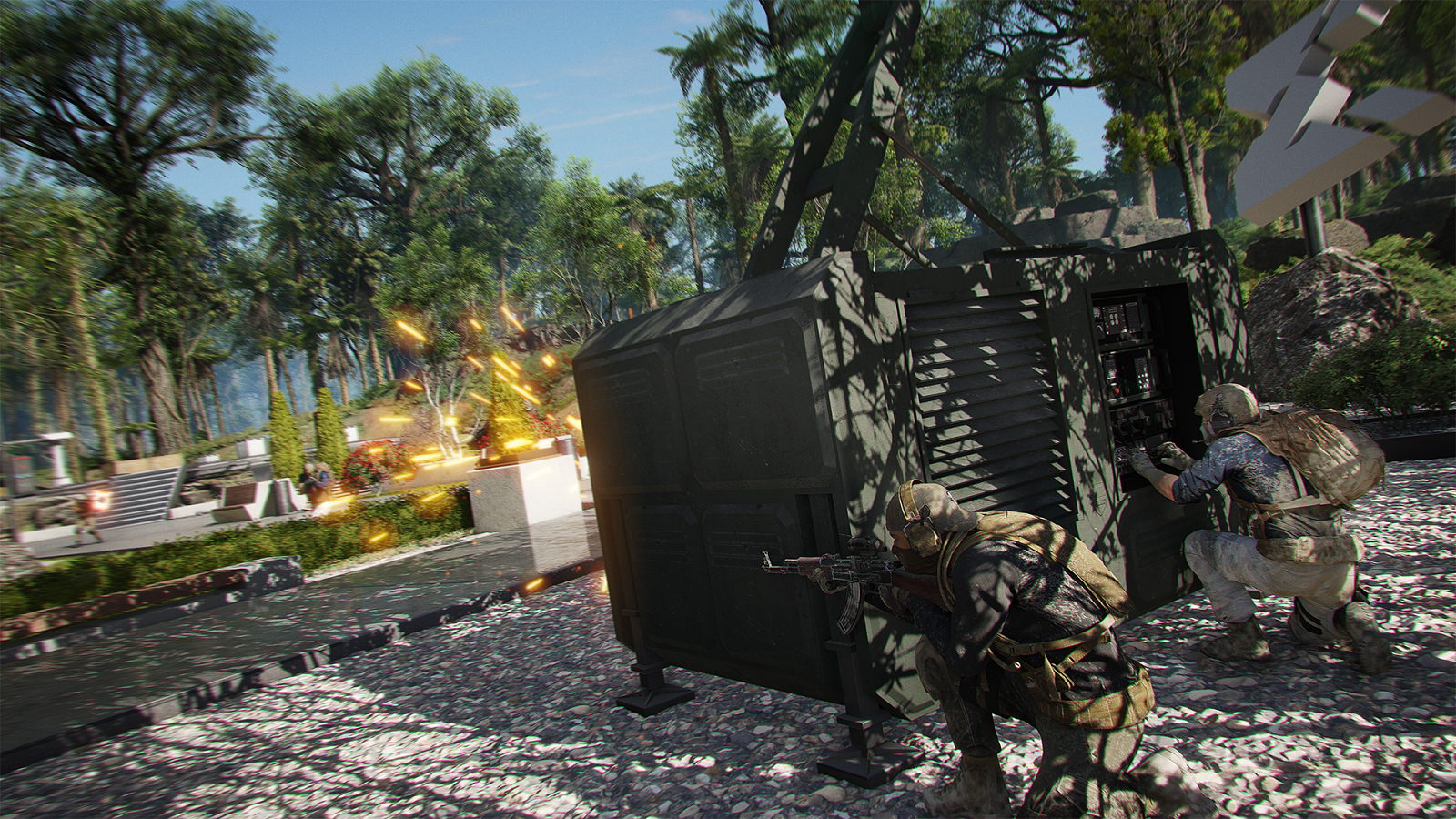 A few weeks ago, I was able to get my hands on Ubisoft’s latest title Ghost Recon Breakpoint. Those in attendance were given an in-depth look at some of the newest features the Wildlands sequel has to offer. As a huge fan of the first installment, I had some high hopes. Of course, Ubisoft didn’t disappoint.

Designed With the Fans in Mind

When I first arrived at the event, the dev team at Ubisoft stressed that Breakpoint was made with the fans in mind. They’ve been scouring the internet to see the feedback on Wildlands. Their aim was to make a game based on what the community was wanting, and it appears they did just that. Along with corrections based on feedback, they also threw in some details I didn’t even know that I wanted.

Right off the bat, what most stood out to me in the six or so hours with the game was the overall depth. What I mean by this is that the story was obviously fiction, but the voice acting, along with the detail in the cutscenes, made you feel as though you were actually there. I don’t mean to sound cliche, but at times I felt like some of the cutscenes were a part of a TV show in the best way possible. Having Jon Bernthal play the antagonist obviously played a big role in helping achieve that feeling.

I’ll be honest, when I heard that Breakpoint was set on the fictional island of Auroa, I was skeptical. One of the ideas that made Wildlands so good in my opinion was that it put you in the boots of an elite soldier in a real life setting. Taking down drug lords in Bolivia isn’t far fetched. Fighting against drones on a huge island doesn’t sound all that realistic. After playing a bit of the game though, I started to see a lot of similarities to the real world and how a scenario such as this could in fact happen. With technology rapidly advancing and drones becoming the latest craze, I think it’s more realistic than most people realize.

How Does it Actually Play?

What matters most isn’t the idea behind the game. It all comes down to gameplay. If the gameplay isn’t enjoyable, the game won’t draw players back in. Now to put some worries to rest. Breakpoint is a tactical dream. The gameplay is perhaps the most immersive yet fun experience that I’ve had in a video game. I was in awe of how your controlled player would react with the environment. The character’s animations were just impressive. I tend to have an eye for detail, and you can tell that Ubisoft made it a priority.

I’ve seen the worries and comparisons that this will be another looter shooter much like The Division. Personally, I’m not a fan of how The Division has enemies that tend to be “bullet sponges” meaning they take a lot of firepower to kill because of their high level. Say if your gear wasn’t matching to your enemies, it was near impossible to come out of the fight a winner. Breakpoint does have a leveling system, but it’s nothing at all like The Division. If you shoot an enemy in the head, they will die, simple as that. It doesn’t matter the level that you or your weapon is, headshots are effective, so plan around that. In that respect, higher level enemies are harder to kill in that they are smarter, and they do more damage to you. It’s a simple yet unique trade-off that works really well.

Another aspect that I wanted to be sure to cover is playing solo versus playing with a team. I like both play styles, so I’m not necessarily biased towards one or the other. Playing the campaign alone was still a great time. You do miss out on the true potential of the game, but Ubisoft has added in enough features to still give you that “tactical” feel. With a promise of adding back in AI teammates, the feeling of not truly being alone will still be there.

The fictitious island of Auroa is one of the most well crafted videogame maps I have ever explored. Ubisoft stated a while ago that players can expect Aurora to be roughly the same size as Wildlands, so you’ll have plenty of space to explore. What sets this map apart from any other map that I’ve seen is how eye-catching everything is. There were times on my playthrough where it felt as though I was actually trekking through an actual jungle, or scaling a snowy peak to find an advantage against my enemies.

Wildlife will also be making a return, but this time, gunning down an animal might be the best option for you. Animals drop protein, which can be used to give you a stamina boost, making it easier to get from point A to point B. In the same sense, if a river is in your way, be sure to fill up your canteen to replenish your energy on the go.

There is also a variety of regions, which get progressively harder the further down the map you go. My favorite moment from the event was when my squad decided to track down this behemoth tank in the snow capped mountains. When we finally came across it, it was an unforgettable engagement. Cover was sparse due to the region we were in, which made it difficult to time effective shots. It also didn’t help that this tank was heavily equipped with mortars, machine guns, and rocket launcher which all seemed to deplete your health in the blink of an eye. After what seemed like ten minutes of laughter, desperation, and determination, we were finally able to destroy the target which triggered quite the firework show.

Part of the event was revealing the much anticipated PvP component of Breakpoint. Ubisoft added in some interesting design points to make the 4v4 gamemode more strategic. A few examples of this would include a new take on elimination. If the timer reached a certain point in the match and there were still players alive, a circle would bring the players closer together much like how a map in a battle royale shrinks to bring in tighter action sequences. Unfortunately, the gameplay that I recorded doesn’t showcase this mechanic, but I was able to see some extra gameplay and it really brings in some unique scenarios.

Planning is absolutely crucial in Ghost War. In my playthrough, the first match contained no coordination and little communication throughout my squad. It made things really difficult. The second match, we planned accordingly and called out enemy locations, which resulted in multiple consecutive victories. One strategy that we used was to split up our squad in teams of two, and engage the enemy on separate sides of the map. It was an effective strategy, and I look forward to seeing what else works when it comes to neutralizing the enemies.

One addition that I really enjoyed was the shared progression between the campaign and the multiplayer. What this means is that my character is the exact same in both modes. Whatever weapons, gear, and cosmetics I come across in the campaign, I can take that over to Ghost War. It was an upgrade to the Wildlands system, which had you create two characters for the respective modes.

There will be two multiplayer modes available on launch, elimination and sabotage. Both modes are 4v4, drawing a main focus on tight competitive gameplay. Having such a focus on PvP this time around, I wish they would’ve tried to do something bigger. Breakpoint’s single player is all about the open landscapes, tactical combat, and vehicle chaos. It would be cool to see game modes that boast a higher player count, along with bigger maps. I was actually able to get a question about this with my time with a few of the multiplayer designers . When asked about the possibility of bigger modes, he could neither confirm nor deny. He stressed Breakpoint will be supported long after release, so perhaps there’s always a chance we see something later on in the cycle of this game. Perhaps a battle royale mode? Time will only tell.

Mark my words, Ghost Recon Breakpoint will be a contender for game of the year. Ubisoft has been on a roll lately, and this will add to an already stellar 2019. In Breakpoint, everything just seems to fit together. The immersion, attention to detail, and gritty gameplay just work.  Hats off to Ubisoft for listening to their community, and making a game which will be talked about for many years to come.

Ghost Recon Breakpoint will be available October 4th, 2019 on PS4, Xbox One, and PC. Stadia players can expect a release in November of this year as well. Be sure to check out our full interview with some of the Ubisoft developers where we go over everything “ghost war.” We’re excited about Breakpoint over here at Gaming Trend, and we hope you are too. Be sure to stay tuned right here for everything Ghost Recon Breakpoint.