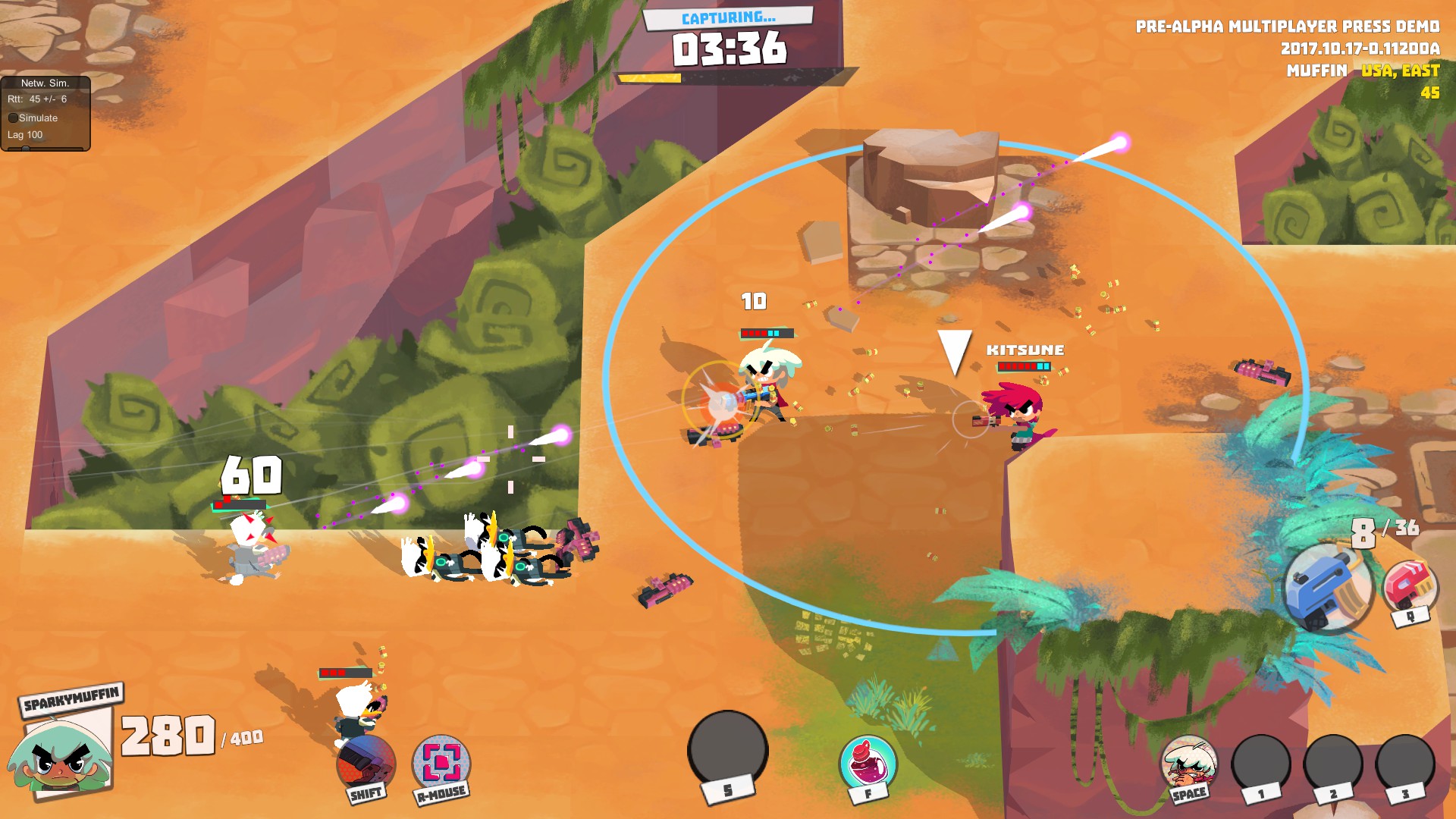 Relic Hunters Legend's Pre-Alpha demo was brief, but a blast

Rogue Snail is now halfway into its Kickstarter campaign for Relic Hunters Legend. Following my interview with Mark Venturelli, I was given the opportunity to try the game out in a special pre-alpha demo and I can safely say that the game is shaping up to being something special.

The demo starts off with a character select screen. From here I can select either Seven, the white haired time traveler, Jimmy, the red-haired rebel, or Ace, the space donkey. Each of the three playable characters have their own set of weapons and mobility skill.

Each character has a rapid fire gun such as a machine gun or an assault rifle and a slower gun such as a shotgun or a pistol. They also have a healing potion that can be used with F, which was very helpful when the Ducans had me surrounded.

Holding shift allowed me to run quickly, making it easier to catch up with my partners if was sent to the spawn point via death. Depending on who I was playing as, space would either give me a quick dash or a jetpack boost. While I was originally iffy on the jetpack, I fell in love with it when I learned that I can hop over ditches with it easily.

Characters have their own special abilities as well. For example, Jimmy has a grenade, which is helpful to clear out Ducans contesting a point.

Which brings us to the objectives of the game. When the game began, my partners and I were greeted with a countdown to give players time to join. When the timer hit zero, the Ducans appeared. These feathery foes shot at us as we reached our first objective: capture the point. If we were standing in the circle, the point would slowly become ours, but if any Ducans decided to pay us a visit, our progress would be impeded until they were pumped full of lead.

These objectives rotated out as we completed them, with stronger enemies appearing with brutal weapons such as a turtle with a shotgun. As each objective was completed, time was added to the clock. The game either ends in failure with the clock reaching zero or success by completing all of the objectives.

While I originally played with two players, the normal mode was simple to get through. Hard mode was where the Ducans had their revenge. In Hard mode, all of the enemies are stronger, doing more damage and taking more hits. It appears that they become more numerous as well, but that could be because we weren’t able to bring down their numbers as easily. With just the two of us, we didn’t stand a chance.

Relic Hunters Legend’s pre-alpha demo ran incredibly smooth, especially when connecting to another player. There was little-to-no lag and we didn’t have any issues connecting to each other. Speaking of smooth, the animation is nice for how early it is in development. It’s a noticeable improvement over Relic Hunters Zero and some of the character’s animations bring an element of charm. It’s hard to be mad at Ace when his death animation is essentially just him fainting stiff.

After playing a limited demo, Relic Hunters Legend has promise. Having the ability to literally reach new heights, jump over ditches and play with friends makes it an incredibly fun experience. If I’m having a blast already, I can’t begin to imagine how enjoyable the full game will be when the story, dungeons, and more in-depth skills arrive.

Relic Hunters Legend still has some time left before the end of its Kickstarter campaign. If successful, the game is expected to be released for free in 2018. Curious to see the game in action? We will be doing a live stream of Relic Hunters Legend’s pre-alpha demo this Thursday, October 26th, at 4PM PT on our YouTube channel.