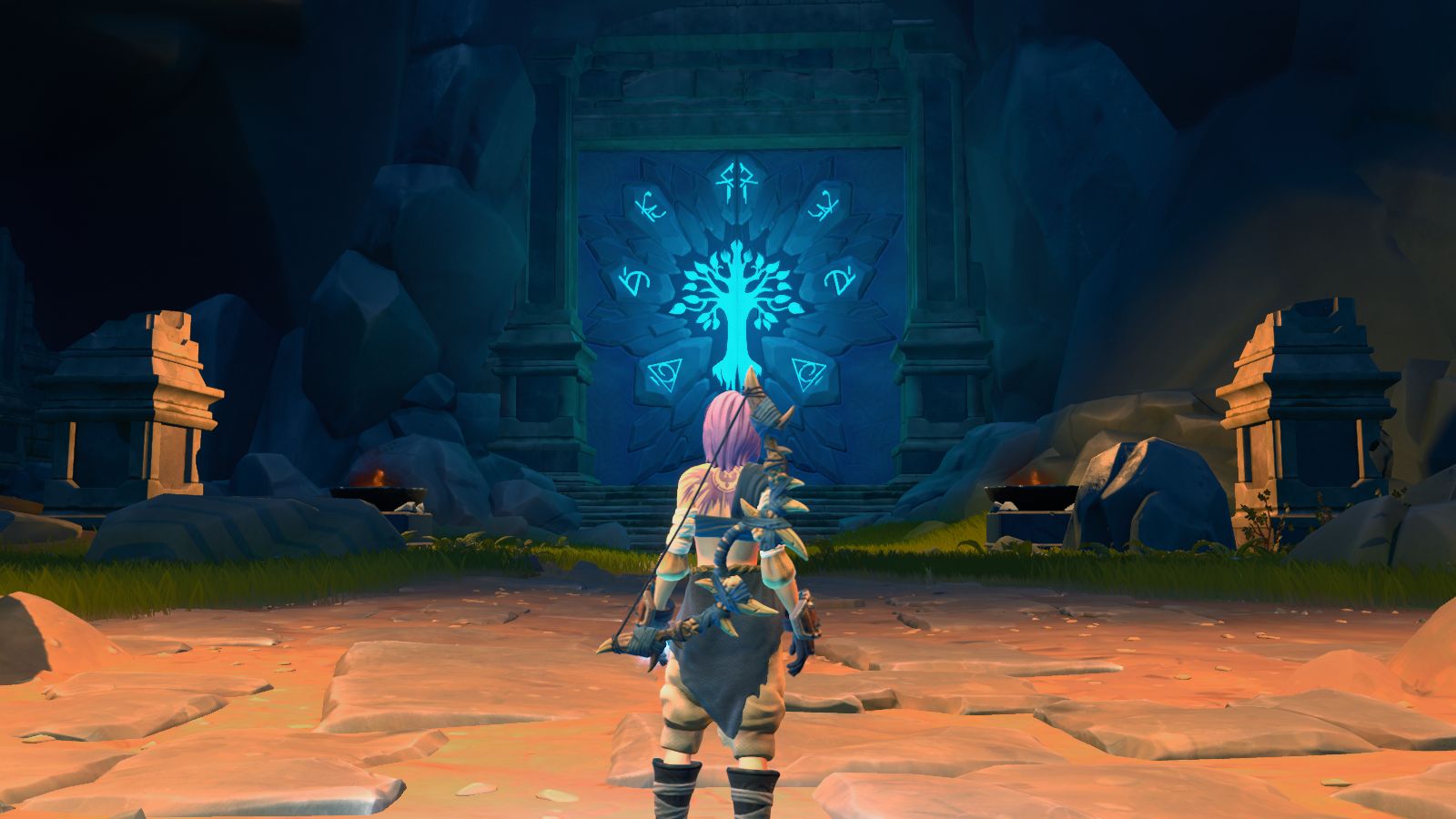 Frozen Flame is a new twist on the survival genre, bringing with it colorful graphics and a focus on exploration. Think Immortals Fenyx Rising meets Breath of the Wild. We were able to get our hands on the game very early on, and are here with some of our first impressions. Before I write my thoughts out on what I think of Frozen Flame in its current state, I want to share with you the roadmap set out by the devs over at Dreamside Interactive. We’ve already seen a few small updates since the game launched into early access on November 17th.

The game has already seen a Christmas event put in earlier this month, complete with a very small and uneventful Christmas island, some decorations, an emotion menu, and general game polishing. Later this December will get an all-new biome called Dragon’s Grove. There are some pretty major updates scheduled for January and February 2023, with future stages laid out behind those. The developers definitely have a vision for the future of Frozen Flame, but the reality is that in its current state there just isn’t much there.

Now that’s not to say that the game doesn’t have potential, and I am really cheering for it to reach said potential. Frozen Flame is set in a world called Arcana, which was once ruled by the Dragons. Currently, you start the game with nothing, and as time goes on you will discover shrines left behind by our ancestors which grant you new powers, such as the ability to fly for a short time. Discovering new islands seems to be the general gist of things here, along with finding shrines to get more skills unlocked in your skill tree. There are plenty of side quests to complete along the way as you work on the main storyline quests. 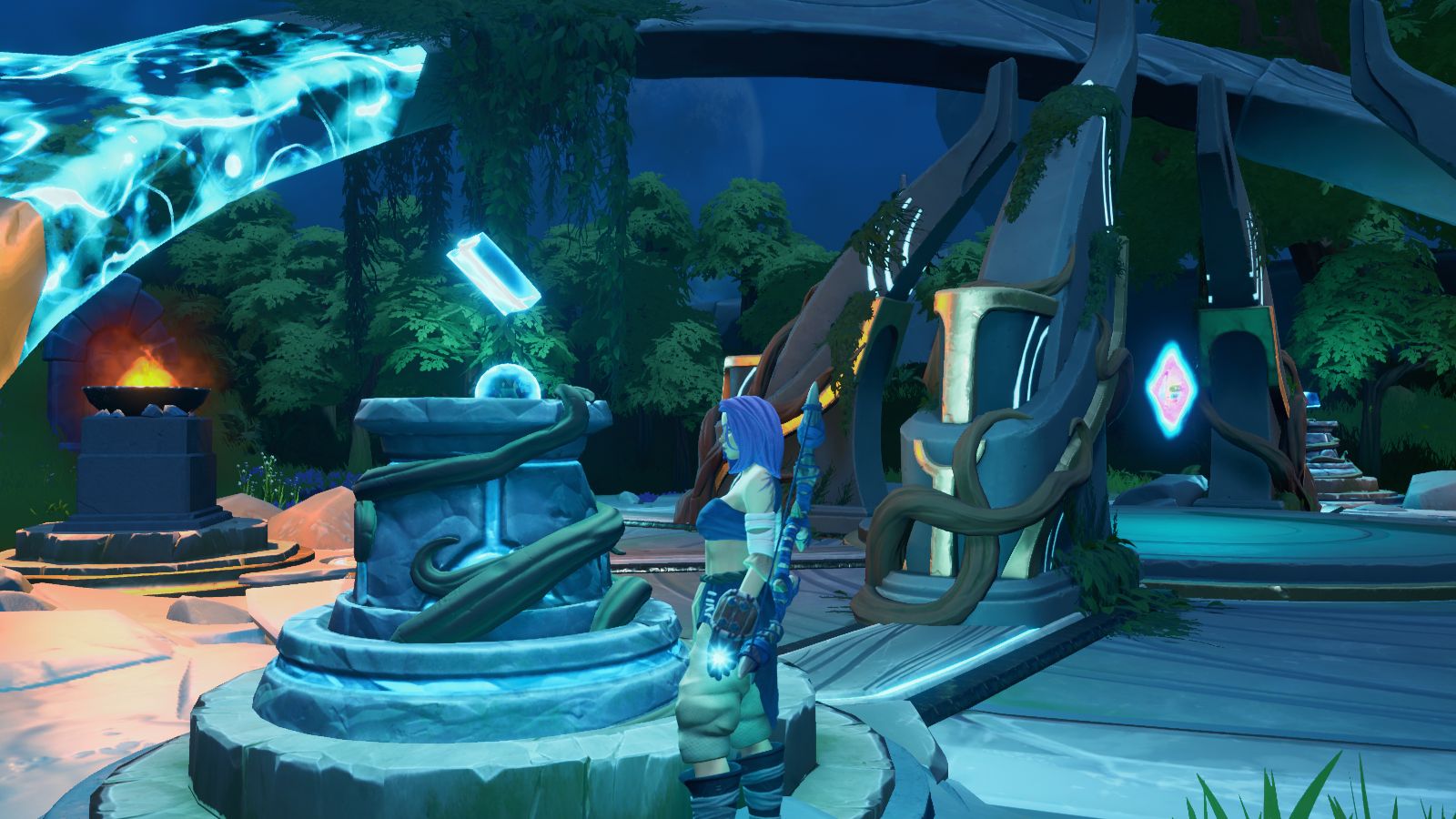 Visiting one of the shrines. You have to place items on each pedestal after defeating mini-bosses.

There is also crafting, and the devs have said they have plans to add a pretty in-depth system. Right now though, there just isn’t much to talk about. The decoration items are all very plain and underwhelming, and the armor isn’t anything to write home about.

My husband and I both love the building aspect of survival games, mainly Conan Exiles and Valheim, of which we have upwards of 1000+ hours on the former. The building in Frozen Flame in its current state is quite boring and feels tacked on without much of a reason. As stated before, exploration is a major part of the game, and you can easily hop around between islands with teleportation pads, but other than to hit up your crafting station there doesn’t seem to be much of a reason to build an elaborate base in Frozen Flame. On top of that the pieces are drab, and the decorations even more so. I get excited about Christmas events in most games I play, but after seeing what Krampus had to offer in exchange for resources I have to actively farm, I just didn’t care. Everything looks and feels empty, lifeless, and plain, which in a game with such bright and whimsical graphics is actually quite odd.

Combat and boss fights are very repetitive and not particularly deep or satisfying. The main quest loop seems to be to find a shrine, figure out what items are needed for a “sacrifice”, perform said sacrifice, do the boss fight which seems to be the same mobs you’re already fighting just with more health and maybe a dodgeable mechanic, then take the loot to the shrine. I am really hoping this gets improved on, but as of publishing this, we got burnt out on things real quick.

While the landscape is really bright and pretty, exploring is also just underwhelming. There weren’t any “wow!” moments where we stopped to take things in. The world is still quite empty both mob-wise and discovery-wise, and once again I really hope to see this improve in future updates. I enjoy the feeling of finding something major in survival games, be it some terrifying boss you accidentally happened upon, or a beautiful vista you just have to build a base at because it takes your breath away. 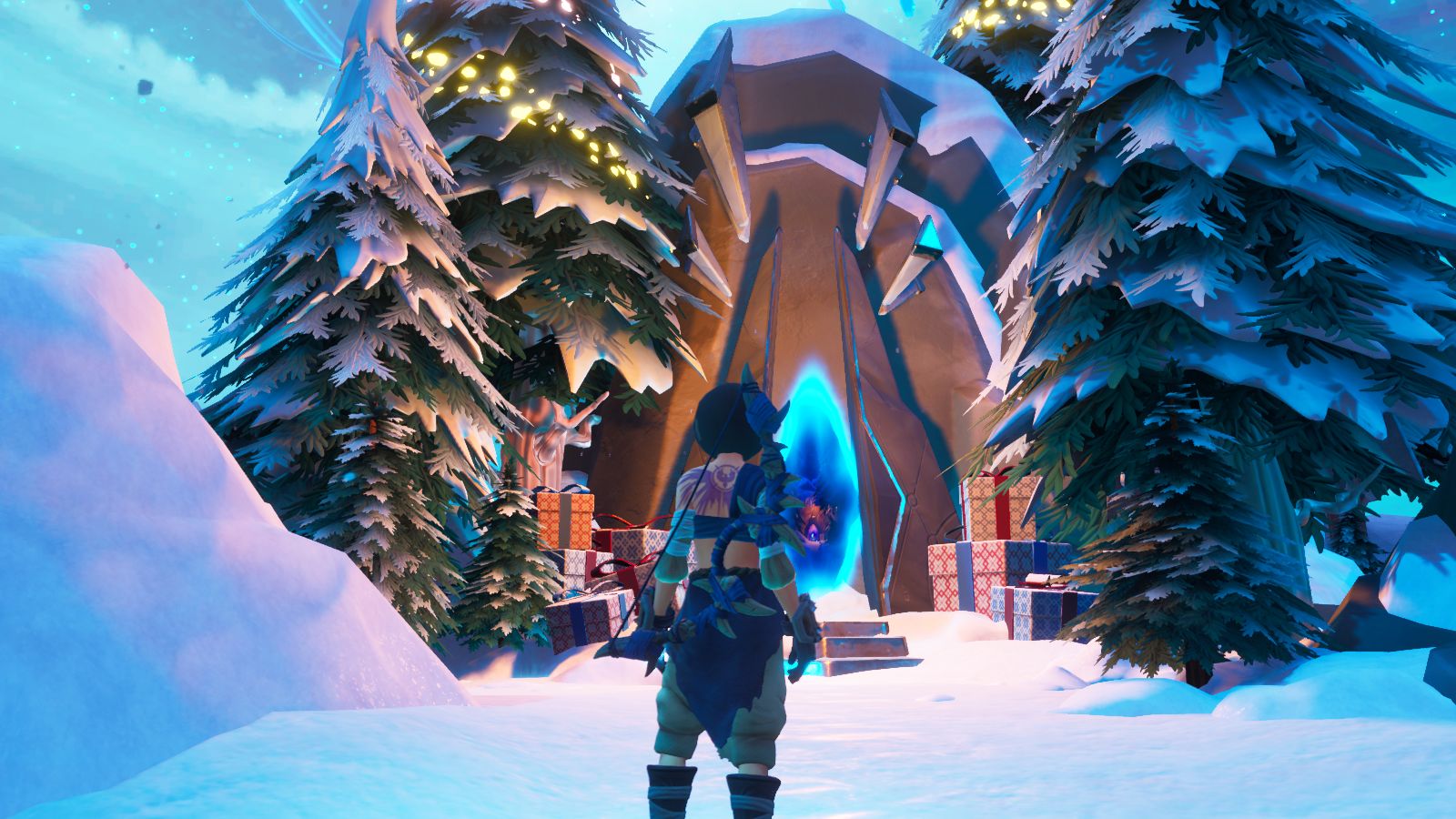 Gateway to the Christmas island.

One thing I did find fun were the little mini-games scattered all over the world. Sometimes they will be obstacle courses you have to run, or timed events you have to complete, such as shooting 20 jellyfish mobs out of the air. The Christmas island had a little race track you run through. It’s fun finding random things like this in games, and we hope to see more of it in the future of Frozen Flame. I did mention above that the Christmas island that came with the update earlier this month didn’t have much on it, but I will say that it’s gorgeously decorated. Hoping to see the island and the event expand in the coming years.

I have to touch on cooking before I wrap things up. This has to be the one thing that really had us frustrated. The amount of time spent cooking ONE item really needs to be adjusted. Discovering a new cooked item you have not made before takes minutes, and cooking known items can take a minute or more to cook. This isn’t a stack, it’s just ONE piece of food!

A major suggestion would be to not only adjust the time food takes to cook but let us cook it in STACKS! It is zero fun to waste several minutes making a single piece or only a few pieces of food that are gone instantly once consumed. If this food left you with massive buffs or something I could understand, but it doesn’t. In Conan Exiles I can cook a piece of food within seconds that increases my weight carry capacity by 45% for an hour and a half…that is a HUGE buff and I’d absolutely wait five minutes in a game like Frozen Flame for something like that. You can’t queue up several items to cook one after another either, you need to build multiple fires to cook more than one piece of food at a time. The whole cooking system needs an overhaul for it to be even semi-useful, and left us feeling very frustrated.

Frozen Flame is an interesting concept and the devs are making improvements on a regular basis. It’s something we will certainly keep checking in on as things progress. But sadly in the current state there just isn’t much in place to get excited about. While some of the feedback in this impression piece seems negative, I truly think this game has loads of potential, and seeing the roadmap keeps me intrigued and hoping for a really awesome game experience a few months from now!

You can check out Frozen Flame in Early Access on Steam, and it is currently priced at $29.99. Stay tuned to Gaming Trend for more updates as the game progresses!