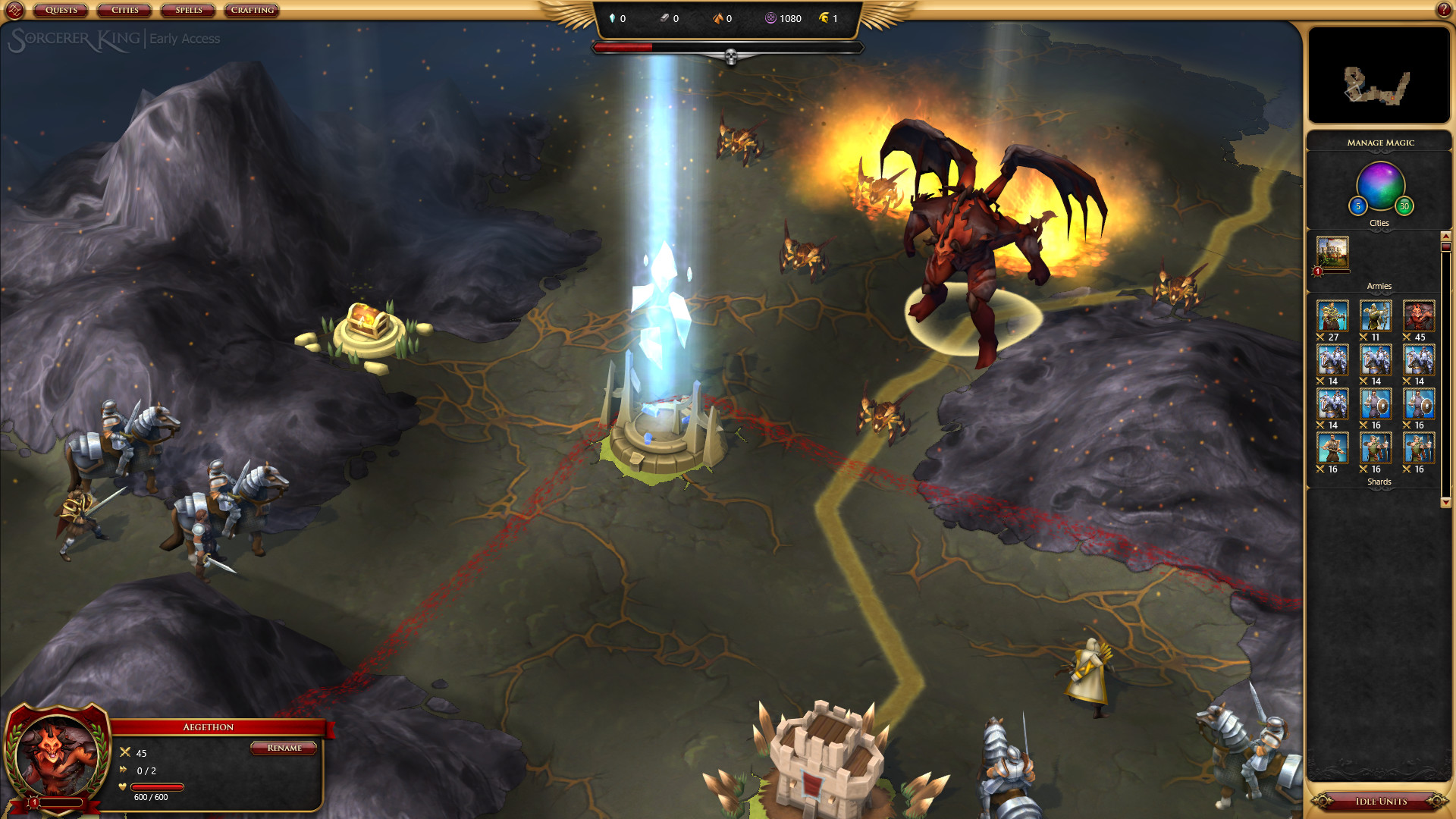 The strategy genre is one that has been dominated by Sid Meier’s Civilization franchise for many years now. Instead of providing an alternate history take with the gameplay, developer Stardock has taken a more fantasy-focused approach in Sorcerer King. This approach has you making a choice from six different classes of “sovereigns” such as Wizard, Tyrant (gets stronger as doomsday approaches), Commander, etc. These six classes provide unique takes on the beginning game as they provide you with their own starting party of three soldiers. They also have their own spellbooks that you can put to use in combat scenarios.

One of the biggest hooks is the aforementioned doomsday counter, which is reflected as a meter that fills up as you continue through the game. This meter is one of your biggest adversaries, as you have to ensure it does not fill up, which you can do by completing tasks and asking other forces for help. The main reason behind this meter filling up is the Sorcerer King and his plot to end the world by destroying shards strewn across the land. In order to combat this you must recruit other forces and level up your own in order to ultimately fight the titular menace and take him down.

The shards act as one of the biggest resources to be found while exploring. You will frequently be told what shard on the map is being attacked by the Sorcerer King, with the option to immediately move your camera to its location. If you choose to do so, you can swoop in save the shard. Once you level up your first kingdom and expand your borders to that shard, you can build upon it and give yourself more mana or XP per turn. These shards are vital to your success and can quickly become under attack by invading forces.

While you do begin with your own unique party, you can also create your own helpers through your settlements, which you are given one of at the beginning of each session. You earn these helpers (soldiers, scouts, etc.) through a turn-by-turn process. Apart from forces, you can also build buildings that will increase things such as food production or unlock new skills and crafting recipes. The soldiers created through this process rarely turn into valuable forces, but rather act as second hand soldiers to the main members of your party. As you build more soldiers and run them through battles with weaker forces, you can combine them with your already established party to form a very formidable foe for enemies.

Sorcerer King features a unique, lighthearted visual style despite its drab depiction of doomsday. The many light colors pop and blend together to make a very gorgeous environment. The visuals are a great palate cleanser for such a strategy-intensive game. While it is fairly simple and never drops your jaw due to being a technical achievement, Sorcerer King’s art style is very solid.

In many games within this genre you see the combat get thrown by the wayside in favor of beefing up strategic elements. This is not the case in Sorcerer King as you get to participate in a majority of the combat encounters. When your character is obviously going to slaughter the competition, it does automatically kill the opponent, but for the most part you put to use a wide array of abilities through a turn-based combat system. As you go through the game, you unlock more and more abilities and within two hours you will find yourself loaded with abilities ranging from simple buffs and debuffs to full on spells that rain fire down upon your foes.

That being said, the combat is fairly difficult to master and can result in some frustration. Of course, if you do want to just auto fight the combat encounters, you can choose to do that no matter the level of your opponents. This tends to be the default way to go if you become too frustrated early on with the combat, something that will most assuredly happen if you do not give yourself a few hours to master the movement and strategy required. It feels next to impossible to defeat an enemy of a higher level of you, which is appropriate but quite frustrating. You should at least have a fighting chance if the opposition is only one or two levels above you.

It is very clear that Sorcerer King is still in Early Access as it lacks almost any kind of tutorial. It gives you a brief overview of the gameplay mechanics but you really have to bang your head against it for hours in order to understand everything happening around you. There is a ton of text hidden within menus that explains some of the gameplay concepts but they have yet to be integrated into the actual game. That being said, Stardock does promise a full tutorial is coming.

Sorcerer King has a lot of interesting ideas being thrown into it, but it makes you wonder if Stardock may be spreading themselves a bit thin. Will they be able to pull it all together and put out a solid project? Time will tell, but the ideas are looking quite good.