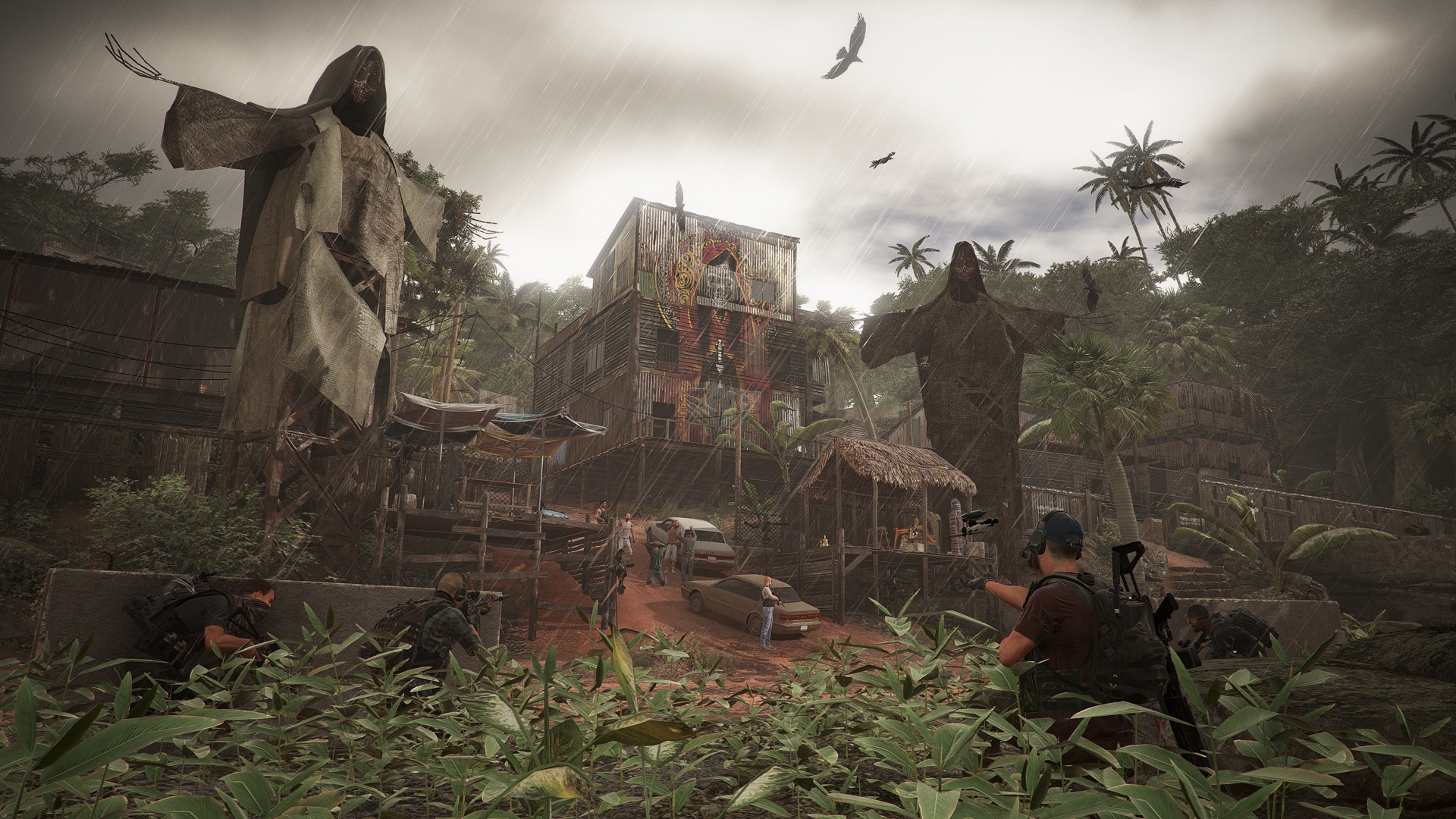 Bolivia used to be a peaceful country. Tourists, parades, and happiness — but all of that was before El Sueño and his Santa Blanca cartel arrived.

Tom Clancy’s Ghost Recon Wildlands represents the largest open world action adventure Ubisoft has ever created, but there’s more here than a big empty world. Recently I got to go hands-on with a recent build of the game for a four hour excursion in two of the 21 provinces in order to experience both solo and four player cooperative play. Before we get on that, let’s talk about the setup.

In a fictionalized version of Bolivia, a man named El Sueño has a most sinister dream. He wants to grow his own coca to brick his own cocaine without the interference of the local Federales, Rebels, or the Yankee government. In El Sueño’s own words, “Like Moses, I will lead my people to the promised lands”. He bought the politicians, he corrupted the police, he purchased the coca fields, and what he couldn’t buy he seized. The ultimate goal was to build a powerful Narco State, and unfortunately for the citizens of Bolivia, he succeeded.

When things get this bad, the only thing you can use to stop something this powerful is something with more teeth. While remaining conspicuously detached from the conflict officially, the United States has sent their most elite soldiers to stem the tide — Ghosts.

The four hour excursion was split into two sections — two hours in the Itacua province, and another two in Montuyoc — to see how the game handles cooperative play. What surprised me was how well the game pivots from solo to cooperative play. Not unlike The Division, everything you do on your own carries cleanly to multiplayer. Thankfully, unlike in The Division, your enemies are not bullet sponges, and your group truly feel like the lethal force the narrative makes them out to be.

Four-person stealth is fun and exciting.

Writing about Ghost Recon Wildlands is a little challenging because of its overarching structure. Put simply, there isn’t one; the game was designed with full player agency in mind. There are 21 regions (each with their own stories and bosses) spread across 11 ecosystems. Spread across those regions are multiple towns, villages, massive cities, landmarks, and more. In aggregate, it represents the largest open world action adventure Ubisoft has built to date.

The first two hours of hands-on time was solo. I was surprised to find that the protagonist and his three companions aren’t the wide-eyed mutes we are used to seeing in open world games. In fact, it’s one of the biggest and best notes of authenticity I’ve experienced so far. As our helicopter soared into the cloud, one of my team begins telling a hilarious joke about Marines trying to get a pair of new boots. It fills the time as we cut low across the countryside to our objective. If you’ve ever hung out with military folk, you know we’ve got stories and jokes aplenty. This gives the team some humanity wedged into bouts of action.

Back on mission, I hear more detail around “Operation Kingslayer” – our official mission designation. Karen Bowman, our civilian handler, outlines the power struggle between Unidad (the military police), the Rebellion, Santa Blanca, and the civilians trapped in the middle of those factions. To destabilize the power held by the enemy we would need help. Local resistance fighter Pac Katari may be the ally we need.

Pac Katari is a member of the Kataris 26, and to earn his trust we’ll have to rescue his uncle and fellow Kataris 26 founder, Amaru. Unfortunately we don’t know where he is, so a bit of recon is required. With this small story primer the game kicks off its open world nature in earnest.

There are over 60 vehicles available in the game (basically, if you can see it, you can commandeer it), so I jumped into the nearest truck and set off to a nearby Santa Blanca foothold. Within, I found a lightly defended area patrolled by a half dozen troops, with a lieutenant running the show. Launching a drone, I used its limited battery power to tag and track targets. Using a command wheel to position my team, I silently cut through the enemy, ensuring no alarms were raised in the process. Isolated, the lieutenant never saw me sneak up behind him. With a pistol to the side of his head, he coughed up the information I needed to follow up and recapture Amaru.

The game is fast paced, punctuated by moments of beauty.

As the game is unscripted and reactive, I chose to secure a helicopter and wait for the cover of darkness for a silent stealthy approach. You, playing the same mission, might go in guns blazing using a tank from a nearby enemy base. You could just as easily secure a plane and dive it into the center of the base, jumping out with a parachute at the last moment. This also creates some interesting design choices as there are no restrictions on where your vehicles can go. The vehicle you grab from mission 27 can be brought to the area for mission 5, so naturally I did exactly that. Once I completed the mission and rescued Amaru, I returned him in a stolen gunship that I retained for the next hour and a half of missions, unleashing hell from above in a most un-stealthy sort of way.

Switching things up, I partnered up with three other members of the press to tear things apart. Ubisoft bumped our stats and skills up for the sake of the demo, but all of the progress I made in solo play carried over to multiplayer. The Ubisoft team told us that in this section the Santa Blanca Cartel had become very strong, building up a strong base of operations, using foreign trainers to raise a small elite army. In response, we ignored that and did our own thing.

With a wide range of skills and weapons now unlocked (you normally find parts in the field which unlocks new arsenals) I got to play around with a much-beloved returning feature from Ghost Recon: Future Soldier — Gunsmith. Gunsmith is the weapon customization engine that allows players to kit out their weapon systems in any way they see fit. Scopes, rail kits, extended magazines, longer barrels, and every sort of camouflage you can imagine just scratches the surface of the available weapon mods on offer here. Like the mission structure, there’s little to stop you from setting up your weapon systems any way you’d like.

I’d be remiss if I didn’t say I was a little concerned about the few technical glitches we all experienced. A few open world problems presented themselves including AI pathing, getting stuck in the environment, and a few audio hiccups. These were fairly cosmetic, but did break immersion a bit. There’s still a bit of time to iron these things out as the game hits shelves on March 7th, 2017.

These two are NOT nice people.

There are four flavors of side missions (Protection, Security, Influence, and Information), which made me worry about repetition, but the way those activities presented themselves never felt like ‘filler’, though they don’t seem to necessarily affect the difficulty of subsequent missions. One second I’m securing a tiny little village, and the next I’m assaulting a hardened base with a tank. Running that same mission with friends resulted in a night-vision-fueled assault with coordinated sniper shots to quietly extract a VIP. Ubisoft has really have proven their ‘play your way’ model with Wildlands.

After several hours of time with the game, I walked away feeling a little more excited about the world Ubisoft is creating. While the game stands on its own for solo play, there is no doubt that it’s fantastic with friends. Even playing with three relative strangers, by the end we were all laughing and having an incredible time. I can only imagine how amazing it’ll be to get the Gaming Trend crew together again to take back Bolivia.

Tom Clancy’s Ghost Recon: Wildlands hits shelves on March 7th 2017 on Xbox One, PlayStation 4, and PC (Amazon pre-order here). Stay tuned for our full review, and for an in-depth look at the game in motion.