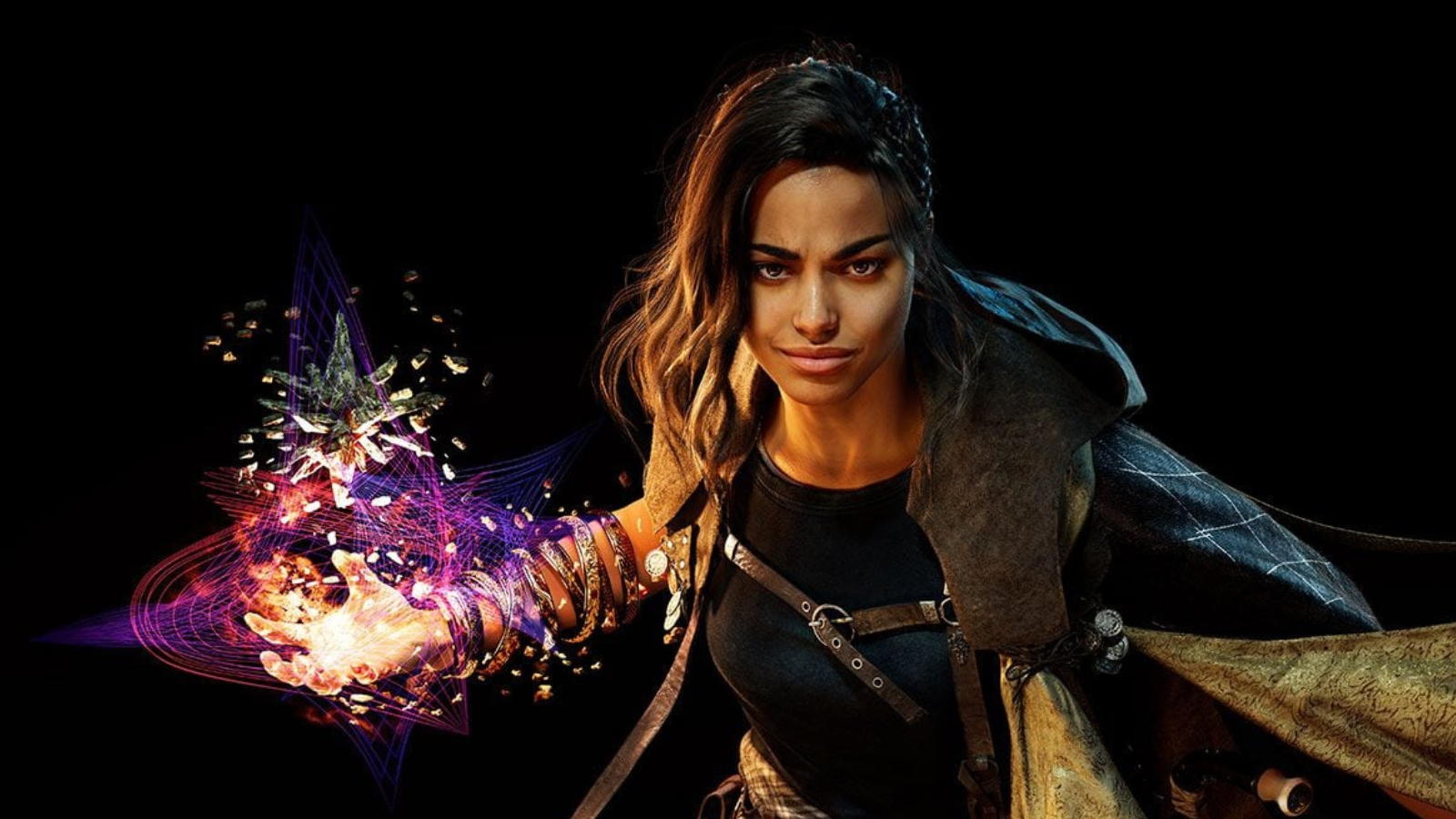 As we sail into the final month before Forspoken hits the shelves, I got to sit down with the team at Luminous Productions to talk with them about their first game, their roots in Final Fantasy XV, and how they’ve brought the world of Forspoken to life.

There have been a few previews on this game, and most of them have concentrated on the midgame. I was given an opportunity to start the game in the second chapter, giving me a few hours with the early game, as well as the third chapter and a 5th chapter boss battle to cap it off. Given just how close we are to the launch, I’m going to be an extra light touch on spoilers to make sure I don’t ruin the storyline for you.

The story of Forspoken is one of redemption. Protagonist Frey Holland, a native New Yorker, finds herself suddenly transported to a musical world called Athia. (Of note, this game was once called Project Athia) In a completely unfamiliar world, she finds that the wrist cuff spiraled around her forearm has the ability to speak to her. Naturally, her only thought is to figure out how to get that portal reopened to make her way home, but soon she finds herself at the center of a fight with powers well beyond anything she’d ever imagined.

The first thing I noticed is that the world is not only gorgeous, it’s also very big. Within about 20 minutes of starting the game, Frey picks up the parkour “Flow” skill, allowing her to rapidly traverse this massive world. Flow operates on stamina, meaning it drains when you are air stepping across the landscape, and refills when she stands still. It refills rather quickly, so you’ll be able to use it fairly freely, though you’ll want to be mindful that you don’t run out at an inopportune time during combat. It works by simply tilting the left thumbstick forward and holding down the circle button, and it puts the DualSense through its paces as you use it. You’ll feel every aerial footstep, rock kick, and nudge, and it’s a great use of Sony’s tech. 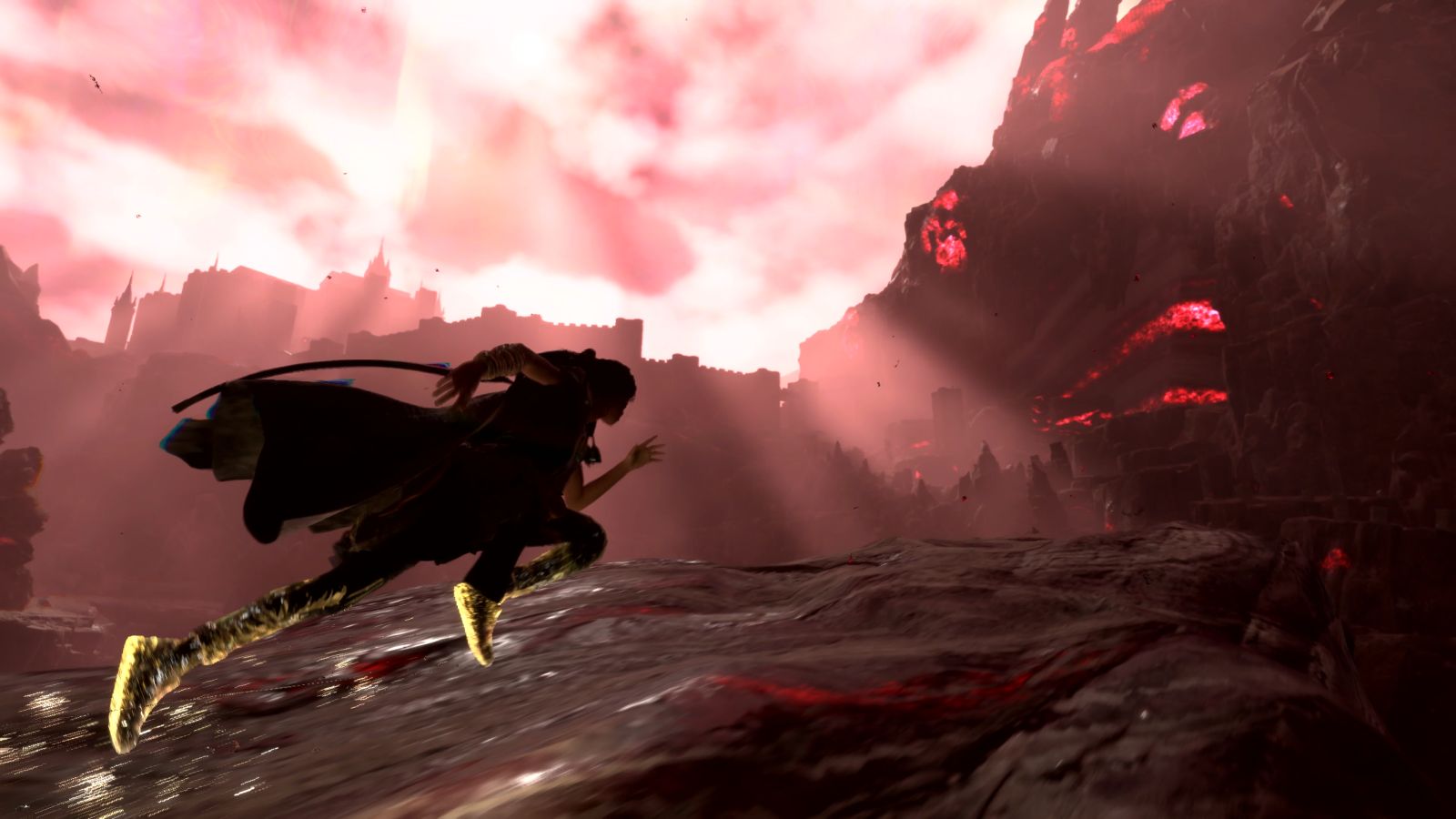 When Frey is rapidly running across Althia, there is a push/pull against your stamina, but overall it’s not a huge impediment. When you start doing it in combat, however, that’s a whole different dynamic. Frey doesn’t have any melee attacks to start, instead focusing on a series of increasingly powerful magic spells to take down the twisted beasts of the land. The parkour system turns into a “point warp” system that Noctis used in Final Fantasy XV, allowing Frey to rapidly traverse the battlefield. When incoming ranged attacks are headed her way, she can effectively bounce through the air to avoid them. Dancing between attacks, racing past foes, and flipping is absolutely magical, and it works – it works very, very well. Until you run out of stamina anyway. If you’ve planned your attacks poorly and not managed your stamina correctly, you’ll suddenly find yourself stopped dead in your tracks, moving once again like that girl from NYC instead of a lightstepping badass. You’ll have to think fast and change your tactics while that stamina recovers.

To help you keep from being burnt to a crisp or crushed you’ll lean on over 100 spells in the game. Thankfully, it’s not as overwhelming as all that. In the beginning of the game you’ll have “purple magic” – Earth based spells that allow Frey to sling large rocks for a lot of damage, or a bunch of tiny rocks for rapid hits. She can even manifest a shield in front of her that she can then explode towards the enemy like a shotgun blast. All of this lies on one trigger, and shifting between them is accomplished with the bumpers. You have three support skills that are tied to your other trigger/bumper combo, allowing you to, for example, whip/poison/lifesteal against a foe, grapple, and otherwise augment your attacks. As you find fonts of mana in the field you’ll eventually be able to unlock and upgrade your spells, further expanding your arsenal. 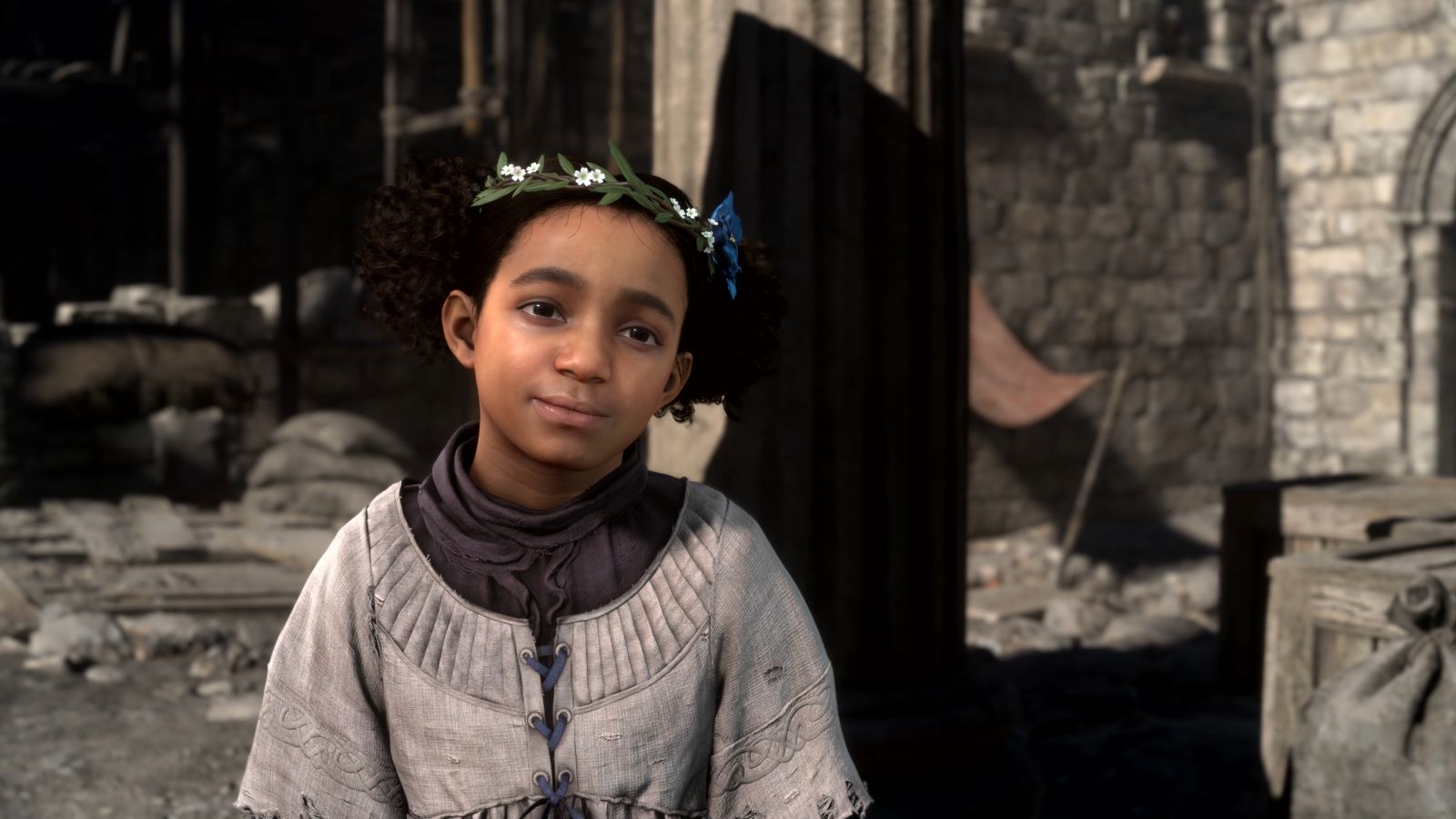 Combining magic and stamina is where the combat system comes together. Landing an attack while flipping out of a parkour step allows you to often score a critical hit on your foe. Each creature has its own weak spot, so you’ll need to be mindful of where you aim, but a little bit of experimentation will yield deadly results. Not unlike DMC, Bayonetta, or other similar titles, there is a scoring system for each encounter. The game watches everything you do. Silently judging…watching…judging…and you’ll get bonus XP for performing especially acrobatic attacks, dodges, and skillful attacks, providing a letter grade at the end of each engagement. In the beginning you are a reluctant hero, barely in control of your own burgeoning power, but by the end of chapter 3 you’ll be whipping through the air, launching attacks while upside down – a force in motion.

In a departure from the normal upgrade of equipment and weapons, Frey can follow a local tradition and paint her nails. This allows you to unlock improvements like additional power for your spells and attack damage, for example, and you can paint both hands differently to mix and match. That’s not to say there isn’t equipment – you’ll be upgrading a number of pieces of equipment, including your cloak. 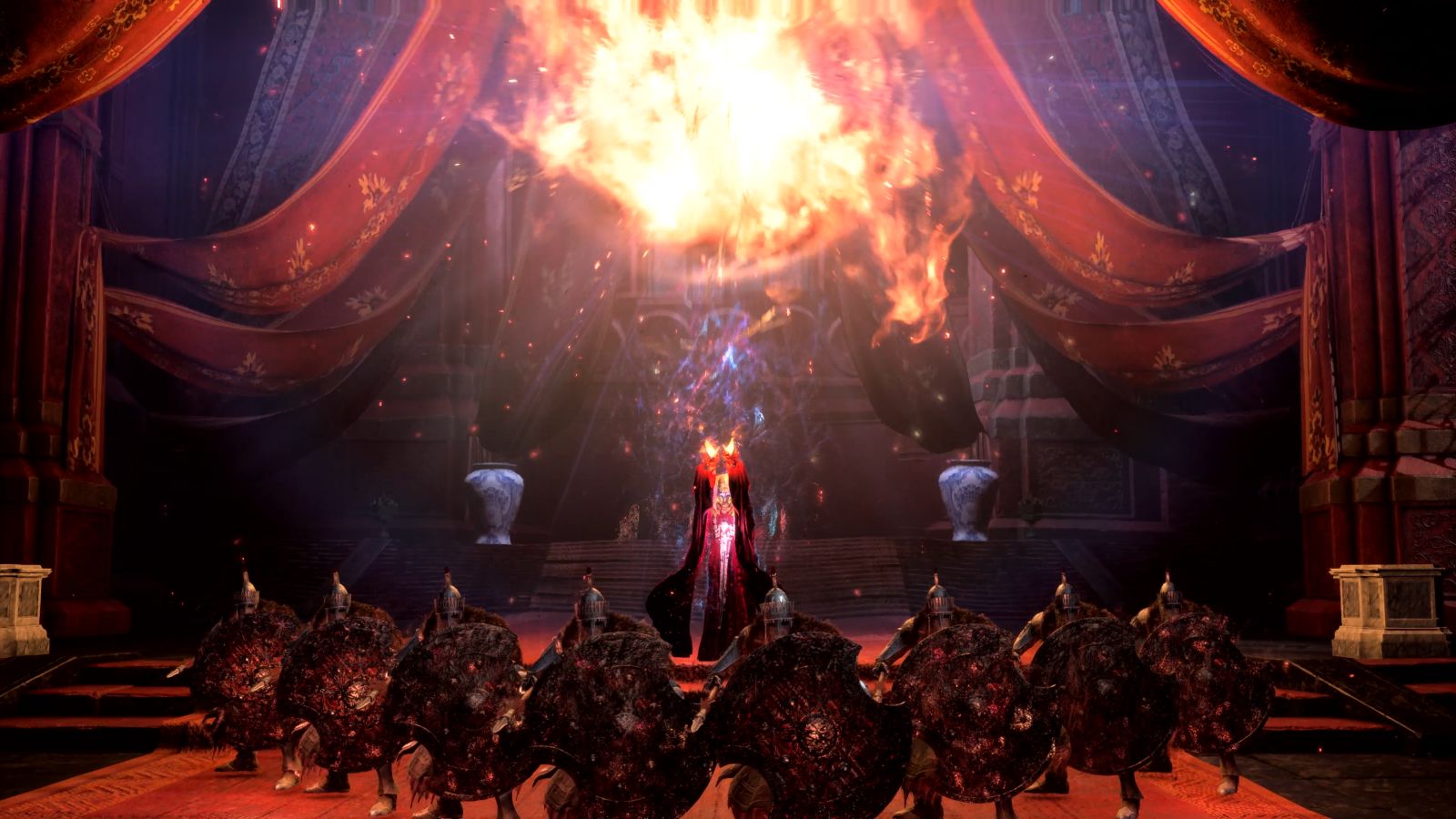 As I mentioned, I got to experience chapters 2, 3, and 5 of Forspoken. Chapter 2 is essentially a tutorial level as Frey learns the basics of locomotion, learns about Cuff (her talking wrist cuff who insists that he’d much rather be called “Vambrace”), and slowly evolves her powers. Chapter 3 presents the open world and turns Frey loose to explore it. There’s still a specific main goal, of course, but the training wheels and linearity come off at this point. You can find Monuments which act as challenges for Frey. The Monument of Wisdom I found asked me to rapidly ascend a nearby cliff using the parkour skills I’d learned thus far, dispatching a number of foes on the way. Successfully completing it yields mana for spell upgrades, and Balm that I could use to craft healing potions. There are other monuments to discover out in the world, each with their own rewards and objectives. You also get more mana and resources to run them multiple times, with bonuses for doing it well.

Back on the main path, some events had transpired that put me in direct conflict with the powers that be. A group of individuals called “Tanta” are the rulers of this land, and one of them has committed an act that we found unacceptable. No matter how uninvested we were in Athia before, Tanta Sila now had our full and undivided attention. Our goal was to head home, but now our only mission was to stop this woman in her tracks. Ascending her castle and blitzing past her guards, Frey bursts into her throne room. That’s when the real fight began. 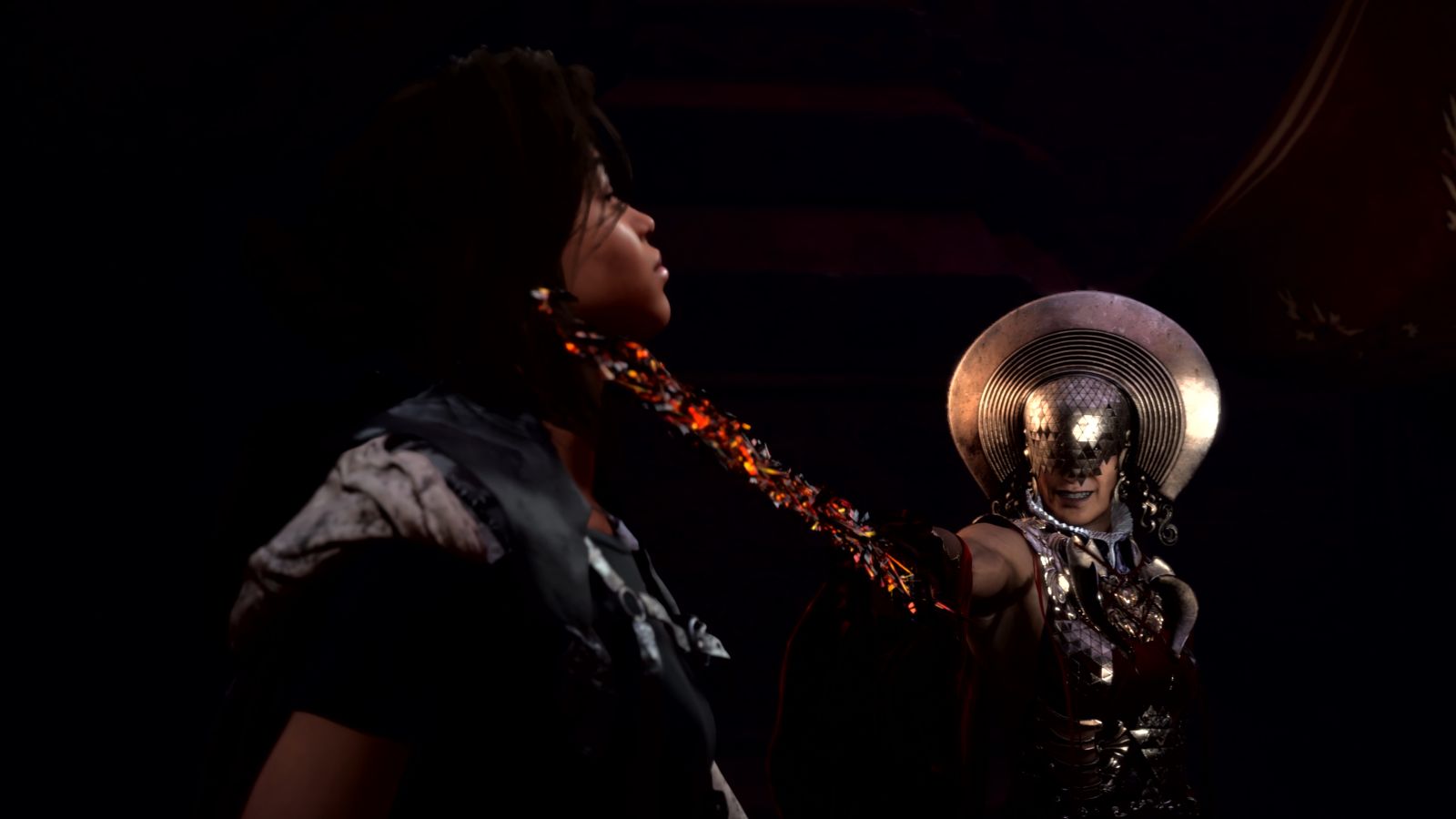 Tanta Sila (who clearly knows where the gym is in this castle and doesn’t skip arm day) was unphased by our threats and bluster, rising from her throne and unleashing a torrent of fire in Frey’s direction. This battle was a test of everything I’d learned over the last few hours. She lobbed massive fireballs that forced me to leap and flip over and under them lest I be knocked to the ground and set on fire. She dashed towards me, attempting to impale me on a fire sword. She set the entire floor on fire, forcing me to find some of the few perches where I could be safe. Alternating between heavy attacks for maximum damage and light attacks for range, I managed to take her down, but no lie – it took me three attempts. The game had warned me that I should be prepared before I headed into her throne room, and it wasn’t joking.

As Tanta Sila hit the ground, some sort of magical force was unleashed, crawling up Frey’s arm and into Cuff. Suddenly, Frey had access to an entirely new line of magic – the same fire magic that Tanta Sila was just using against her. In that way it was immediately clear that accessing the other two schools of magic would require that I take down two more Tanta to acquire them, but that’s an adventure for about a month from now. 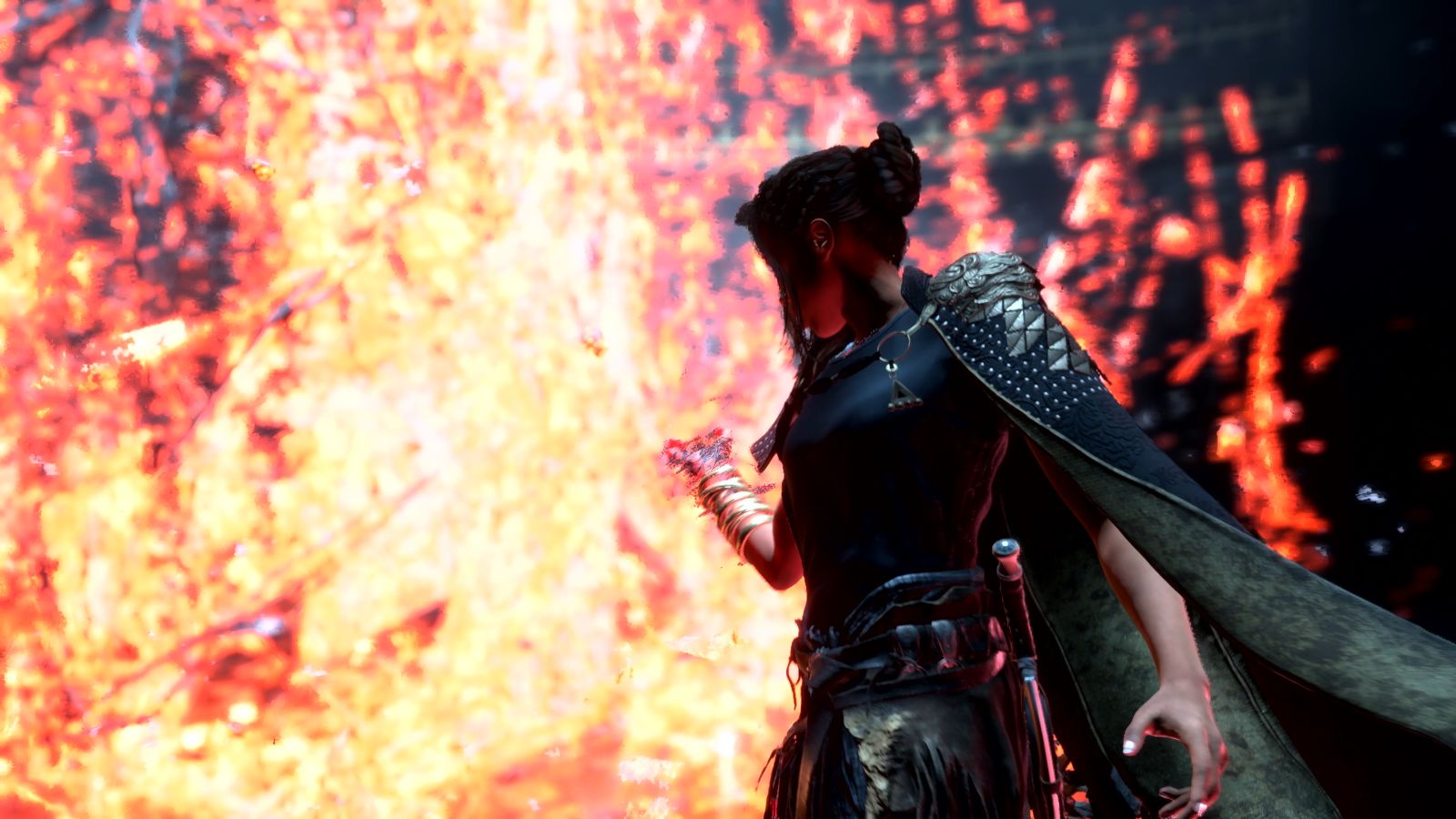 I came away from Forspoken impressed with the world that Luminous Productions has built. This is their first original game and a brand new IP. It shares DNA with Final Fantasy XV, but with a far more personal story and a focus on magic over melee. I did feel like Frey’s personality will be a bit divisive as she certainly starts off as a very unlikeable protagonist, but towards the end of my time with this cross-section of the title she was starting to grow on me. The linearity of the beginning and the grading of my combat prowess was a bit of a throwback, but the ease of parkour and the flexibility of the magic system felt like it really clicked after a few hours. It’ll be interesting to see how all of these systems come together to draw the whole experience together.

The best news is that Forspoken has a demo that was announced at The Game Awards, so you don’t have to take my word for it – you can try it for yourself!

Forspoken will ship on PC and PlayStation 5 on January 24th, 2023. Look for our review at GamingTrend.com and let us know in our Discord what you thought of the demo.