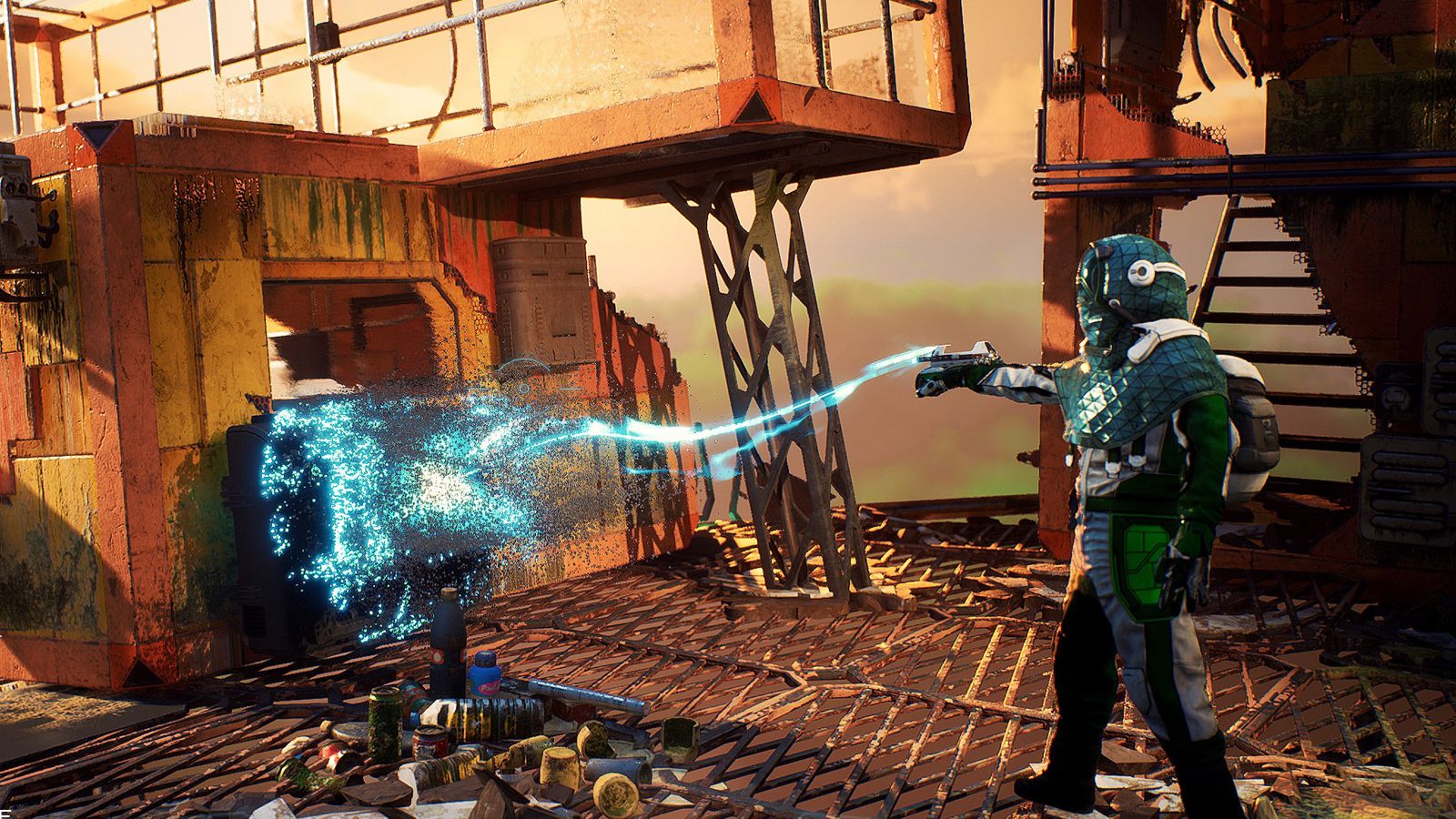 I don’t know how I ended up here, but I know how humanity died. It appears I’ve crashed my ship somehow, and I’ve landed…somewhere. I am most certainly alone, scrabbling amids the detritus of what looks to be an old radio tower. The pain in my stomach and the dryness of my mouth tells me I have more immediate needs, but the groaning of the rusted superstructure suggests I might have something equally as pressing. A green, noxious fog permeates every bit of the lower horizon, threatening to engulf the world above in its lethal embrace. I can’t think about that, though – I’ve spotted what appears to be an airworthy mini-blimp on the nearby landing pad. This may be my one chance to escape, and when every aspect of your immediate surroundings looks to kill you, you take any port in the storm.

Developer Far From Home’s name is apt. Forever Skies feels very, very far from home, and you are alone in this alien world. In the brief demo I got to play I immediately felt the grip of isolation and desperation they were aiming to drop on the player. Like any good survival crafting game, you’ll start off with absolutely nothing and a ticking clock before you starve to death, dehydrate, or worse. Scrounging on a derelict tower leaves you with few options for food and water, but you’ll quickly find a scanner that helps. A handful of sun melons from some plants will offer food and a small bit of hydration, though sipping from pooled water on this rusted wreck might have long-term effects at some point. 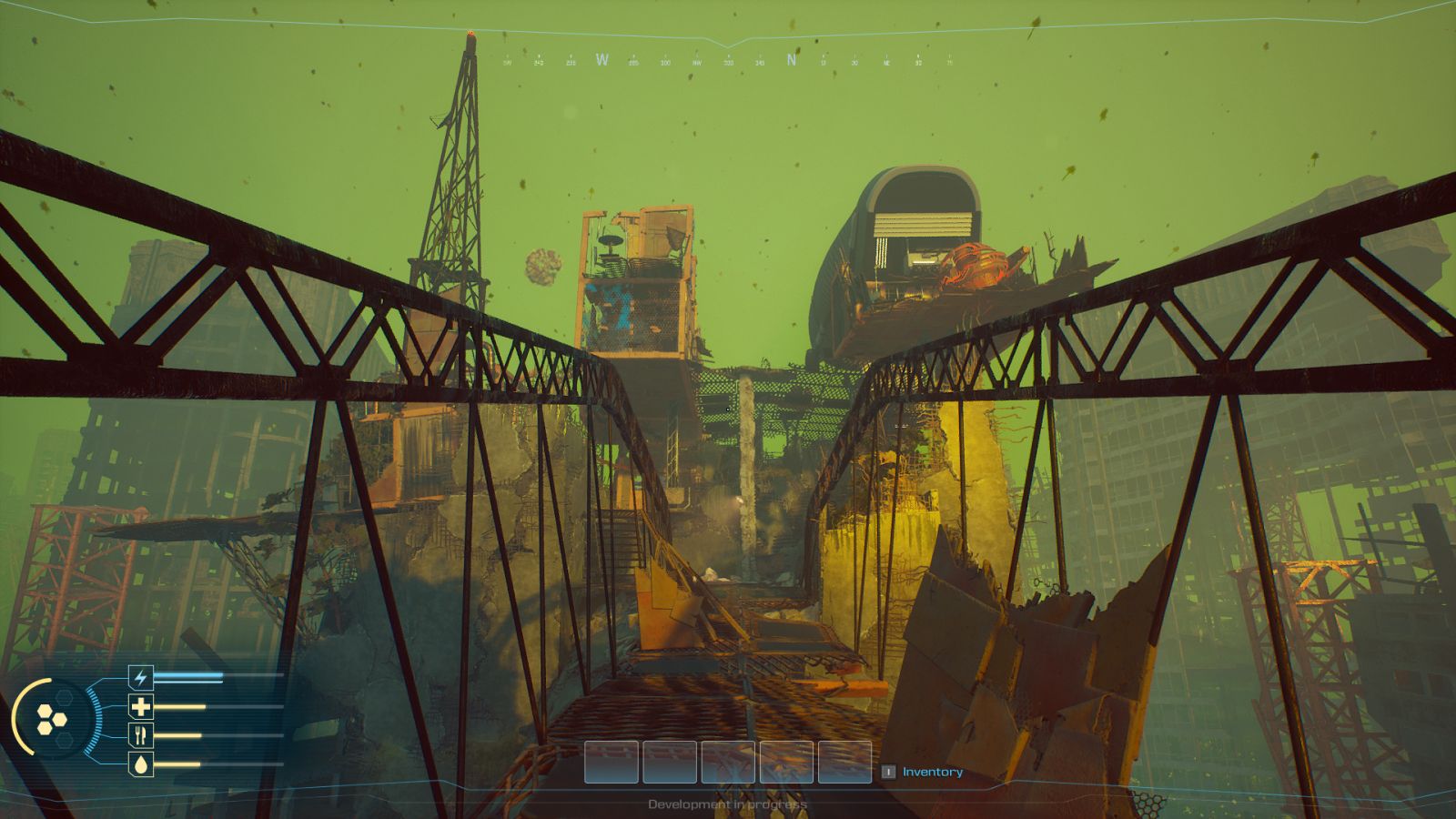 Gathering up a handful of notes, data pads, and journals, I was able to piece together some of the final moments of the previous inhabitants. It hints at a wider world that I was excited to explore. Boarding the ship I find what I need to not only survive, but thrive. A fabricator allows me to build new constructs like a small water condensing machine to gather ambient moisture, though I’d also need materials to build a filter to ensure what I’m collecting doesn’t contain traces of the toxins from below. Another machine would let me scavenge scrap metal, synthetic material, and glass as it flies past the ship, or literally dissolve it off of other towers. It provides me with materials to expand the footprint of the ship’s floor plan. Additional rooms give me the space I need to build hydroponics, additional engines, an insect catcher and electric cooker, a bed, and bottles for storing and processing water. Discovering new ways to thrive is a major part of any good survival game, and it’ll be fun to discover all the ways Forever Skies might do it differently. 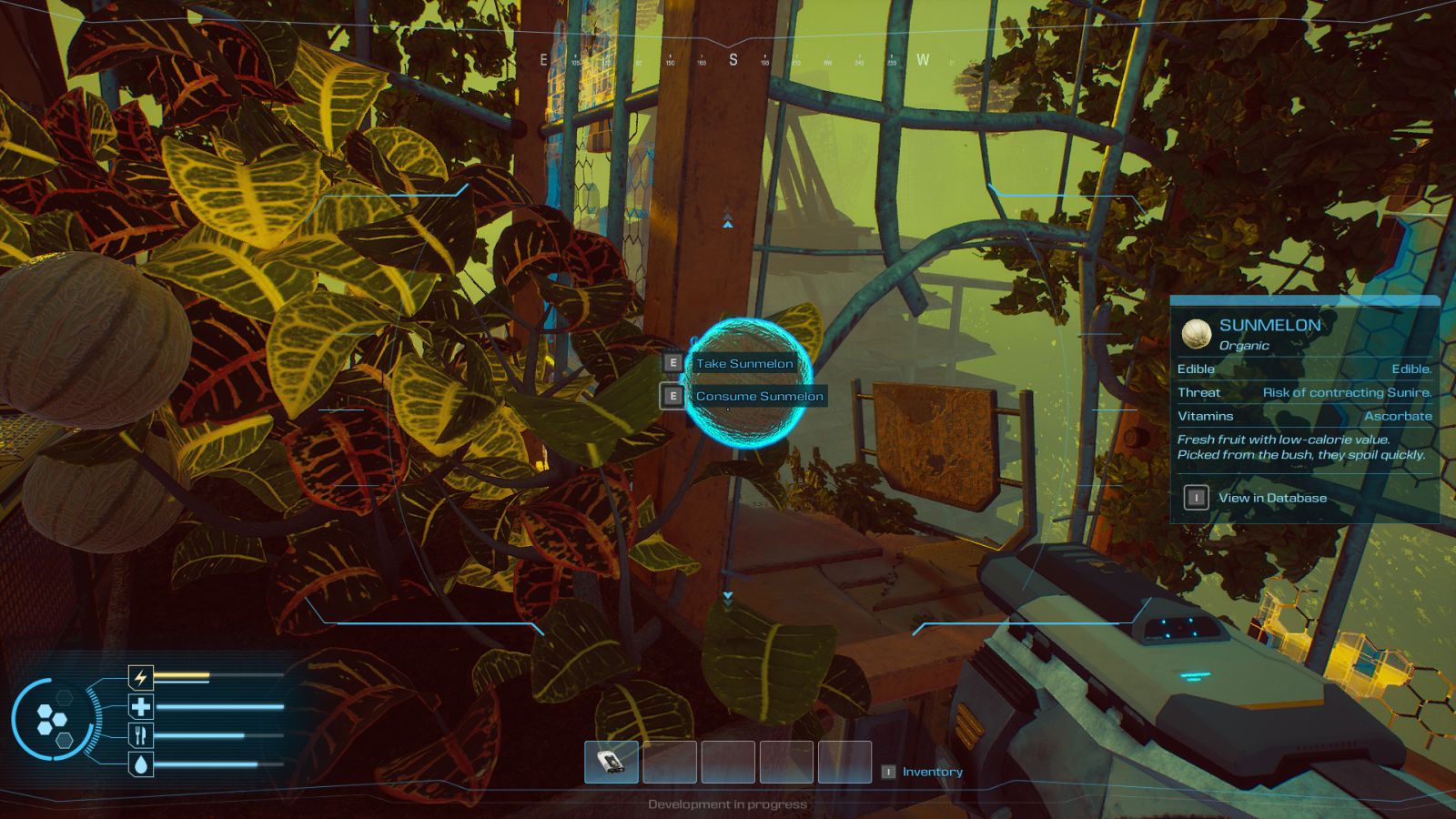 We only got a small taste of the world of Forever Skies. The moment my feet hit the deck of my blimp, a 20 minute timer clock started. As my ship slowly drifted across the sky, I spotted blinking orange lights that signal potential life. I was reminded that, despite the challenge of this demo (it’s very easy to starve, dehydrate, fall off your ship, or meet any other number of sticky ends), the developers also gave us a note reminding us that many of the world’s dangers lie ahead. In this demo, the creatures aren’t present (other than some pesky bugs), and there’s no way to descend through the green fog into whatever horrors lie below. 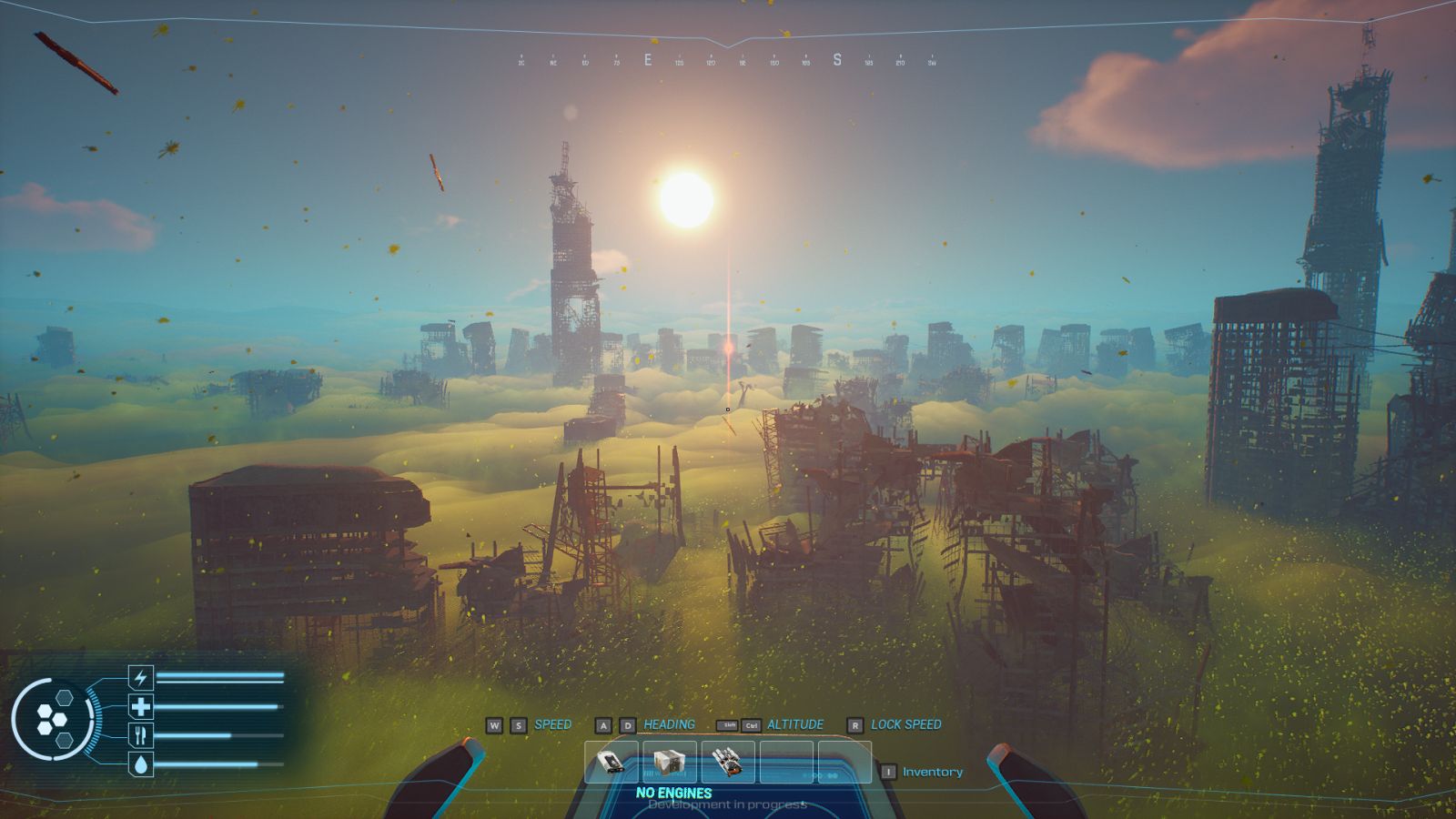 One thing that’s easy to see is that Forever Skies is gorgeous. The game is running on Unreal Engine 4, and I dare say it’s extracting every bit of goodness possible from that engine. The world feels rusted and gritty, with the dirigible feeling more clinical and safe on the inside. It’s a good blend, and it conveys nicely the juxtaposition between the decaying old world, and the promise of a better future – if we can live long enough to craft it. 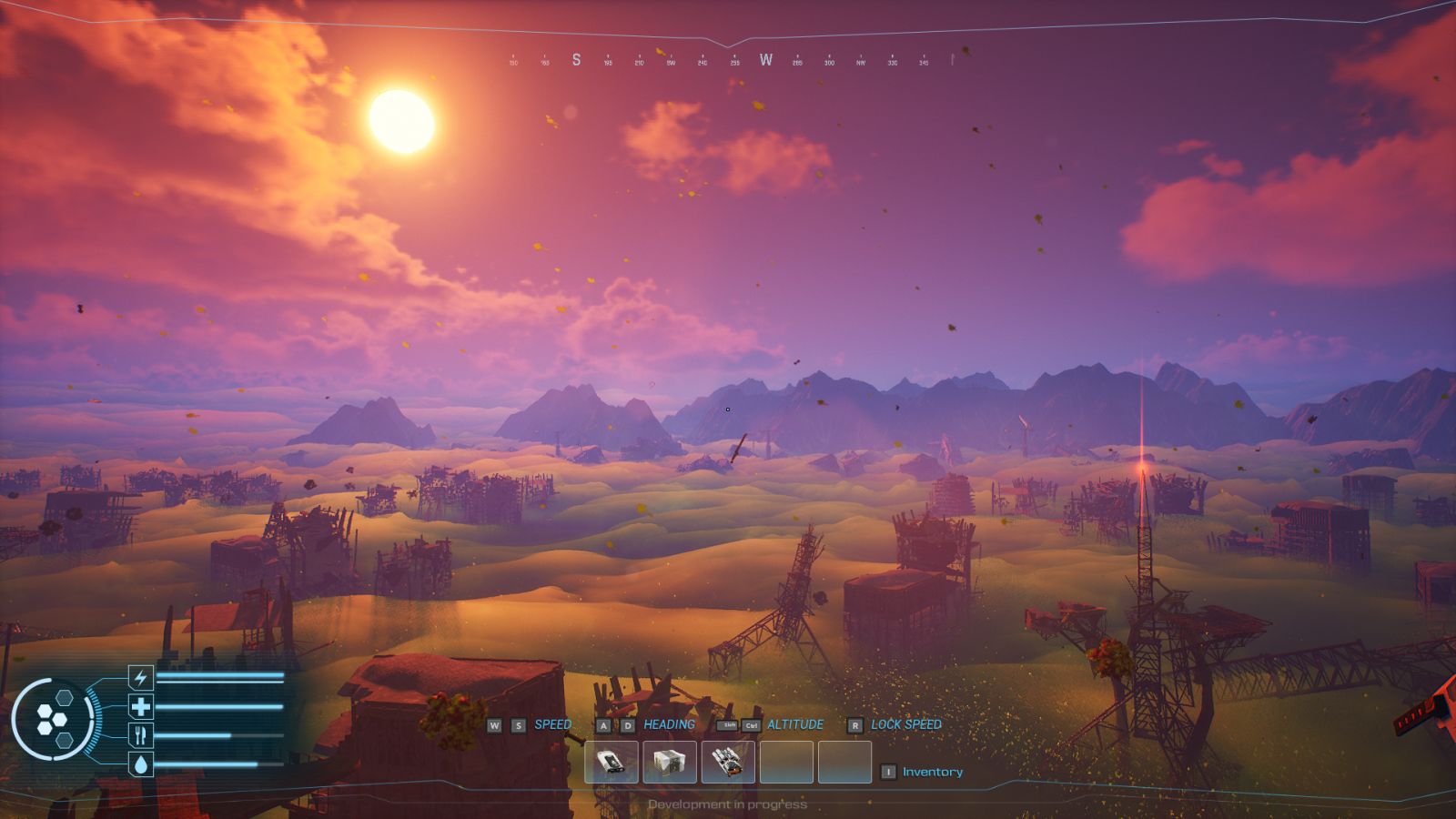 The game is still early, but the roots of a bleak and fantastic desolate survival wasteland are here. Right now you’ll craft nearly everything from the same three materials, with the odd battery to be found to build new and more advanced equipment. Those same batteries will power various doors and gates on the derelicts we found, so it looks like there’s some good risk/reward trade-offs. Additionally, the multiplayer component isn’t yet available, so teaming up to battle the elements isn’t quite ready. If you’ve played early versions of games like Raft, Voidtrain, and to a lesser extent Volcanoids, you know what you are getting yourself into with Forever Skies. It’s simultaneously claustrophobic and expansive as you slowly build out your blimp, expanding its size and capabilities while you explore the wider world. Given how high of praise (and my play time!) those aforementioned games get from me, this puts Forever Skies in good company. 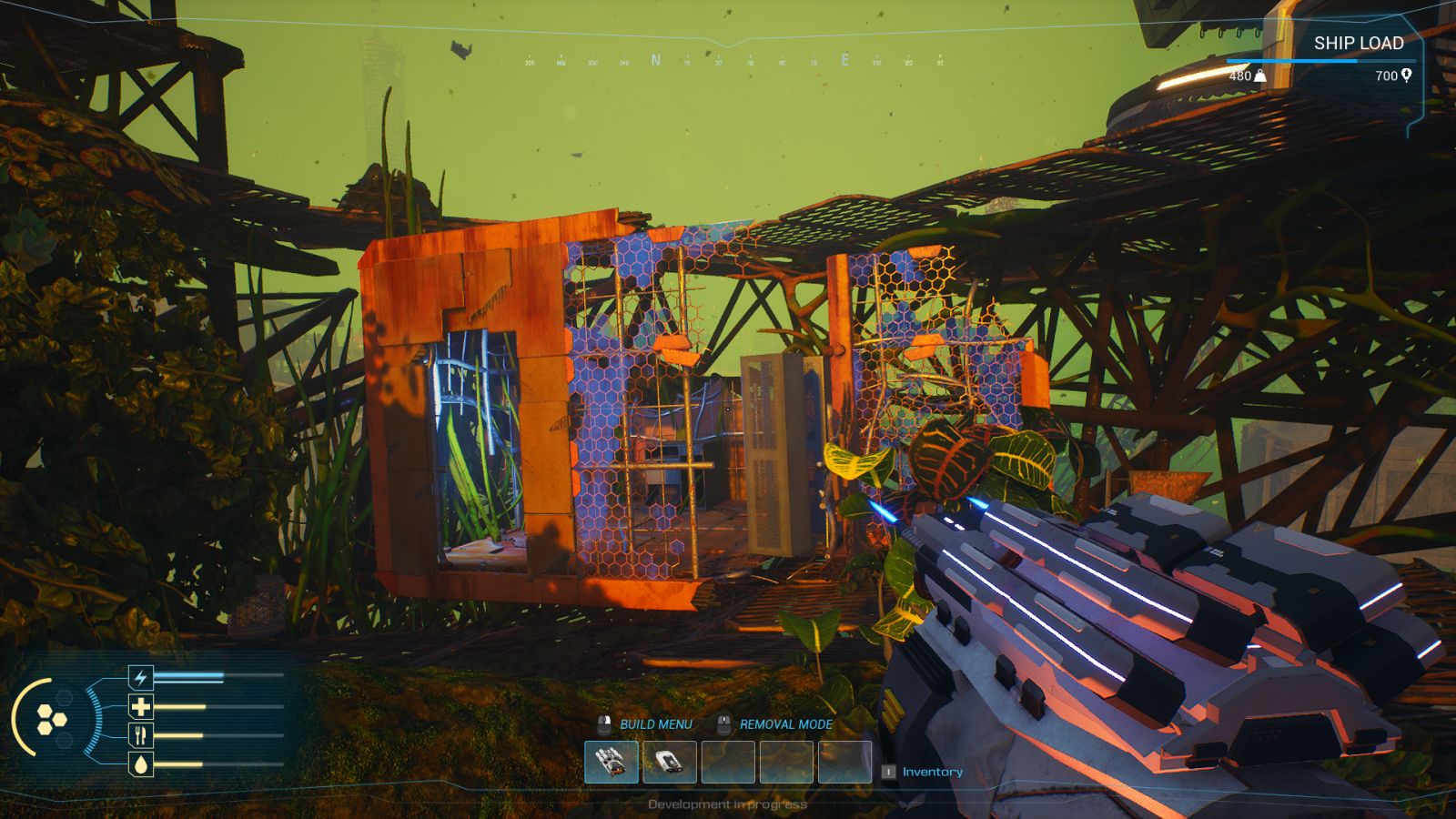 I came away from the quick 20 minute demo for the game excited to see more of what the game has to offer. The world is mysterious and we’ve only scratched the surface. The building system, while simple on the surface, would easily balloon in the same way a game like Icarus starts off simple and ends up very complex. I can’t wait to bring my friends along as we explore this dangerous world, seeking the world underneath the fog as we try to bring humanity back from the brink. It’s bleak, and I love it.

You can look for Forever Skies to hit Early Access in 2022, with an eventual release on PC, Xbox Series X, and PlayStation 5.