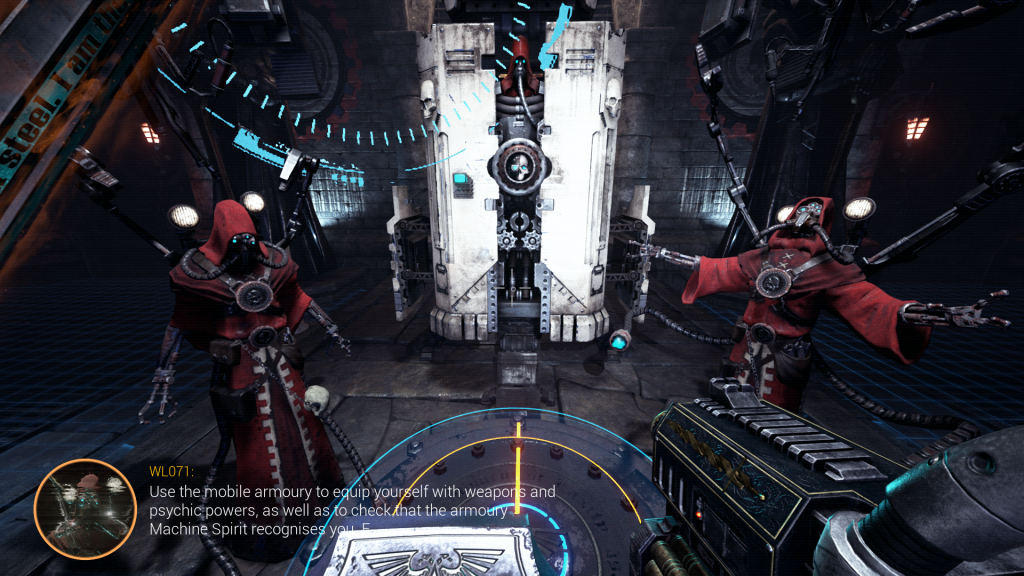 Space Hulk: Deathwing (hereafter “Deathwing”) is fast approaching its December 9th release date, and I’ve managed to sink my claws into the multiplayer co-op beta. For those of you who haven’t been following this one, this is a game set in Games Workshop’s ever-popular Warhammer 40k universe, placing you in the role of a Space Marine Librarian. You and your allies are tasked with facing off against the Genestealers – a crafty type of Tyranid menace hellbent on infecting and subverting the Imperium of Man, and whose threat demands eradication at the hands of the Emperor’s sons and daughters. Deathwing is a first-person shooter with a heavy cooperative angle; think ‘Left 4 Dead meets Warhammer 40k’ and you’re on the right track. My short-take:  this is an absolutely gorgeous, well-crafted game that has few flaws to speak of, even in beta form. If you’re looking for some cooperative alien-eradicating action, or if you’re just a big Warhammer 40k fan, keep your eye on this one because it’s looking tremendous.

The first thing I noticed when loading up Deathwing was the environment. I’ve never played an actual tabletop game of Warhammer 40k, but at this point I’ve had enough encounters with the lore and stories to get a sense of the epic and gothic from it all. I imagine a world filled to the brim with abundant, imposing technology on the one hand, and yet a tremendous presence of religious and threatening symbolism on the other. Not exactly an easy mental image to breathe artistic life into… and yet, the team behind Deathwing has managed it beautifully. It’s something I noticed right in the tutorial – that dead-on feel of an oppressively claustrophobic environment flooded with machinery, maintained by zealots and threatened by alien nightmares. The only thing that momentarily broke my immersion were the way-too-specific keyboard commands on the holograms, since I don’t imagine any Tech-Priest in the Imperium of Man ever programmed a hologram to read ‘PRESS E TO HACK’. It’s a minor complaint.

Remember: human hands are embarrassingly low-tech. Replace them at the earliest convenience.

That same tutorial also introduced me to some of the Deathwing arsenal, and that’s where another complaint popped up. Aesthetically, they’re beautiful pieces of equipment, and the game promises a variety of melee and ranged equipment to play around with. But one thing I noticed is that they don’t feel quiet as epic as I imagined. Maybe it’s the high quality of the visuals unrealistically raising my hopes, or a lack of impression made by the audio. Whatever the reason, they seemed to miss that sensation of having a real ‘kick’ when fired – that mental experience of being able to identify with the recoil of a weapon as you reduce some Xeno-freak to a pile of guts and trophy-pieces. I emphasize this just because the game otherwise knocks it out of the park with the environment and immersion – so here’s hoping this is an aspect which gets tidied up before the full release.

Deathwing’s gameplay really shines. By now, the whole 4-player cooperative multiplayer thing is a genre unto itself – Left 4 Dead apparently kicked off, well, a gaming trend. But Deathwing’s take on this gameplay style is the most innovative I’ve seen. There are multiple classes, each with their own emphasis – the apothecary who provides healing and buff support, or the heavy weapon specialist who can take out big groups of Genestealers. There’s a selection of melee and ranged weapons to choose from, some class-specific, as well as some specialty abilities. The most interesting addition, is the onscreen overhead map which gives a heads-up about where and how numerous the enemies are. Since Deathwing takes place in a massive ship filled with a network of hallways and corridors, the focus on knowing which direction to keep a gun aimed in adds an interesting element to the excitement. I quickly learned that the map was more than a convenience – it was something I had to pay attention to, since the bare second or two it would take to spin up my gun could mean the difference between life and death for myself and my teammates.

If you ask me, medical professionals could all use more terrifying skulls on their uniforms.

All in all, the multiplayer beta for Space Hulk: Deathwing has more than encouraged me. It’s made me excited to get my hands on the full game. This is shaping up to be one of the most fulfilling implementations of the Warhammer 40k universe to date, and with a good launch and some post-launch support, I could see myself and many others purging xeno filth from the universe for months to come.