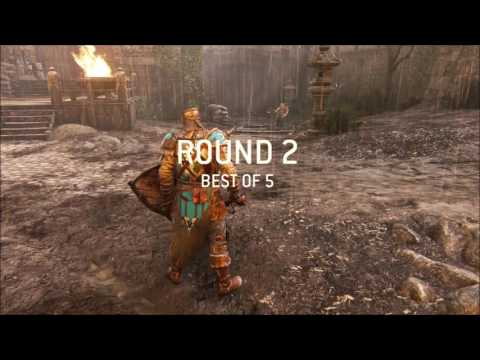 Vikings, knights, and samurai are three of the most iconic warrior archetypes in history. Each of them is well known for different reasons: Vikings for their ferocity and fearlessness in battle; knights for their stalwart nature, strong armor, and brutal weaponry; and samurai for their swordsmanship, skill, and grace. I don’t want to say, “get hype” prematurely, but um, I think it’s about that time. Seriously. For Honor looks amazing.

Three classes were available during my demo at PAX West: the Warden, the Kensei, and the Raider. The recent closed alpha added in three more: the Conqueror, the Berserker, and the Orochi. They all felt balanced but distinct. Every encounter I had, no matter the outcome, was exciting. Each fight was tough and tactical, but winnable. Every movement, every strike, mattered. Despite being a relatively fast paced game, duels remain quite calculated; button mashing will only get you killed.

Ubisoft Montreal has tried to make the duels in For Honor feel as real as possible, as they are a large part of the experience. To accomplish that, a solid control scheme dubbed The Art of Battle was created, and I think the result is a success. Admittedly, it was a struggle for me at first, but once you’ve got it, it works extremely well. The key, the developers told me, is to focus on perfecting your blocking first and then you’ll find that the rest will follow easily. They were right.

You can assume three basic attack stances: left, right, and center. From these positions you can lash out with light attacks, which are swift but cause minimal damage, or heavy attacks, which are slower and easier to block, but are devastating when they connect. In order to block incoming strikes, you must mirror your opponent’s stance—if he is aligned to his left, you must be aligned to your right. Stances are denoted by the three left, right, and center indicators on each character, but once you’ve gotten a few duels under your belt, you can just watch for body positioning animations.

Additionally, all attacks require stamina that regenerates when you’re idle. Stringing combinations of light and heavy attacks from varying positions together is effective and difficult to counter, but you must be careful not to exhaust your stamina while doing so. If your opponent is expertly blocking everything you throw at him, you can break his block. To do this, you must move very close to your enemy, leaving you vulnerable, but from there, you can grapple and shove him backwards with two taps of the same button. Capitalizing on the one or two seconds of disarray thereafter can make all the difference in a heated contest. You can also push your opponent off of a tall ledge or onto a strip of wall-mounted spikes for a satisfying instant kill. Having the situational awareness to use your surroundings like this is often advantageous; anytime a fight drags on, the chance of you being double-teamed by other players increases.

During PAX and the recent alpha, I played a great many rounds of Domination, which is a conquest style 4 vs 4, PvP match. I wondered, at first, how often I’d encounter other players, or if eight players were enough for a match. It turns out, eight was plenty. Finding and capturing the control points was quick, but I almost never managed it without having to fight once or twice. No matter how one sided the scores became, it always seemed possible to come back from the brink. The action was intense and virtually non-stop.

Aside from being one of, if not the most, visually appealing games at PAX West this year and having an impressively stable alpha, For Honor is just ridiculously fun. Throw on your chainmail and pick your weapon of choice, kids, because For Honor will put in you the shoes of that sword swinging, face smashing medieval badass that you’ve always wanted to be.