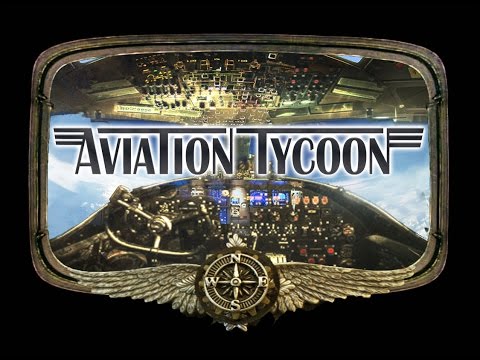 It’s not uncommon for games to put you in the position of a shrewd business owner, trying to make a profit. Some of them give you the opportunity to own the business by owning shares and betting on their success and failure. Aviation Tycoon does the latter, but includes some decisions that influence how much you can make.

The board is made up of seven cities with different airline routes between them. Cubes representing passengers are placed on the different cities. The color of the cube represents the city they are trying to go to. Routes that the airlines service between cities are displayed.

Each turn has several steps. First the turn marker is advanced to show what turn it is, followed by an event card being turned over. These event cards can be beneficial to specific cities or airlines, but they can also be detrimental as well. Cubes are then drawn from the bag to bring the number of cubes in each city up to two. If you draw a cube with the same color of the city you are drawing for, the cube goes back in and you move on to the next city.

Once this portion of upkeep happens, the players participate in their turn. Each player may use their special action for the turn. Then they can draw a stock certificate, either one of the face up ones or an unknown one from the deck, similar to Ticket to Ride. Then the player lays down a stock from their current hand into a tableau in front of them. If a player is the first one to have two stocks of an airline, then they receive the Presidents Share. This is beneficial since the player owning this gets an extra $1000 bonus and the first money from the airline’s bank. The Presidents Share can be taken away if another player owns more stock of an airline than all the other players.

Once the shares have been taken care of, an airline route marker can be placed on any marker on the board for any airline. These make the routes more valuable, with passengers paying more to take them. Then a passenger may be moved to their destination. They can move one route in the first half of the game, while later on they’ll be given the ability to move two routes. Passengers aren’t able to move to a city that isn’t their destination. After a passenger movies, the airline bank accumulates $1000 along with an additional $1000 for each airline route marker along that route. If a player can’t or doesn’t want to move a passenger, they can take a random cube from the bag and hold onto it until they want to place it on a city of their choice.

At the end of the turn, the start card and special action cards are passed to the player to the left. If it is a scoring round, the special action cards are placed back in the box and each player is given a new one. Then play resumes from the first step unless it is a scoring round. During a scoring round each player adds another stock to their tableau. Once that is complete the stock payout begins. The starting player chooses and airline and they payout begins. The player with the Presidents Share gains $1000 in addition to $1000 for each share of stock that player has. If there’s still money in that airline’s bank, the player with the next highest shares of stock gains $1000 for each share of stock they own. This continues until the airline bank is out of money. Once the stock payout is complete, new special action cards are dealt. At the end of the game, the player with the most amount of money wins the game.

Aviation Tycoon is a game that should appeal to those who want something a little heavier than Ticket to Ride but still accessible by non-gamers. The turns go by quickly, but each action has a large amount of strategy behind it. However, since no single player owns an airline, you feel like you have no idea how the scores will be at the end of the game. Be sure to check out the game on Kickstarter now.