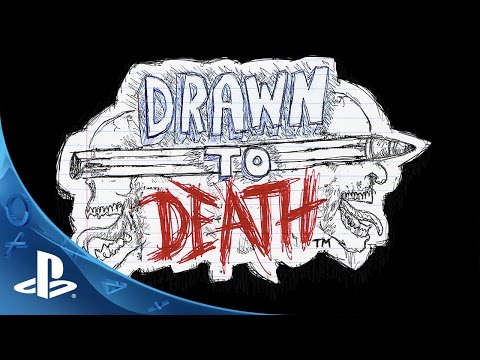 One of the big announcements at the Playstation Experience was David Jaffe’s newest game, a multiplayer third-person arena shooter called Drawn to Death. Featuring a variety of colorful characters and even more colorful language, I was eager to jump in and see how the game played. Just a heads up: this game is fairly vulgar, even in the names of weapons and items, so be aware that there will be some harsh language in my preview of it.

Right off the bat, the aesthetic draws you in. The game is set inside the notebook of an angst-ridden teen, and filled with punk rock references, violence, profanity and notes about due assignments. Each character and building looks sketched and rough, and made the game really stand out amongst the other shooters on the show floor.

There were four characters to play as in the demo, each with their own powers and abilities. I got to try out Alan, a man with a teddy bear head and chainsaw. While each character has a main weapon, usually the “Fuck You 47,” and a secondary, they also have passives, special abilities and powers to use as well. Alan could cloak, passively regained health (at the cost of not being able to pick up health), and throw his chainsaw and teleport to where it landed, swinging it an arc around him.

Throughout the arena are power-ups, which can range from weapons to doubled clips and bonus damage. You can also grab “Hand Jobs,” which are powers you can call on from the “creator,” the high schooler drawing the battle out. His hand can sweep in and pick you up, moving you around at fast speed, or slamming down on an area to damage enemies.

Though the demo was fun, it was a pre-alpha, and there will definitely be steps taken in the future to further develop the game. If the concept interests you, you can sign up for more information and a chance at early access at the website, www.drawntodeath.com.