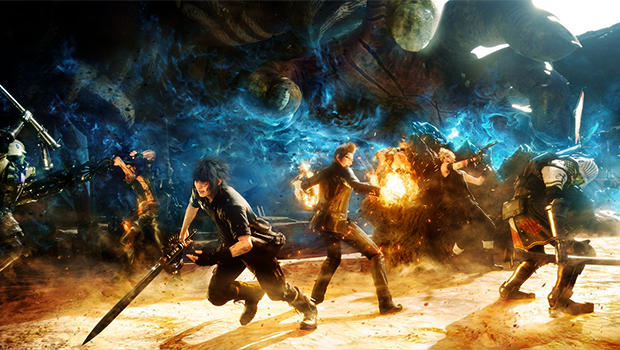 I had the opportunity to get my hands on the new Final Fantasy XV demo at New York Comic-Con. While our coverage at PAX West was done by someone unfamiliar with the series, I’ve been playing Final Fantasy since the days of FFIV, and, like most every Final Fantasy fan, have been chomping at the bit to see how this newest game measures up to the franchise’s long history. Due to time constraints of the convention itself, I was not able to play the full demo, but I was still able to sink my teeth into the game for a good half an hour.

The demo, which is allegedly the first 45 minutes of the final game, dives right into the action, dropping you onto the sidelines of a battle in progress. Three characters valiantly but ineffectively hurl attacks at a giant who lounges behind a wall of fire. Seemingly bored to tears, the giant occasionally flicks his finger in the most casual of gestures, launching devastating, screen-shaking magic attacks at you and your allies. Charging into battle launches a cinematic sequence, something the game often slips effortlessly in and out of.

From there, time quickly winds back, transporting you to a much more tranquil and intact city. You, as Prince Noctis, are sent on a quest by your father to meet your bride-to-be, your three best friends at your side. Noctis is the typical, surly male main character we’ve come to expect from the Final Fantasy series, reminiscent of both Cloud and Squall, and rudely walks out of the throne room without the proper protocol. During preparations for the journey, the king approaches with a request for Noctis’ friends: that they do not guide Noctis so much as much as simply be there with him. Geared up and ready to go, you head off with your companions, each with their own distinct role: Gladiolus, the muscle, Ignis, the brains and Prompto, (or “blonde Reno of the Turks,” as I will forever refer to him) the comic relief. Unfortunately, no sooner does the quest get underway that technical difficulties hinder the progress of Noctis and his party.

Stranded on the freeway, you have no choice but to push your car toward the nearest city. Yes, it’s a mini game, and no, it’s not at all challenging. It does, however, give you a bit of time to use the camera thumbstick to explore the game’s graphics, while simultaneously giving you a little control to break up a string of cut-scenes. I actually enjoyed the chance to drink in the desert scenery, and considered the default camera angle’s prominent focus on some male eye candy an added bonus. As we continued along, camera control slipped away, panning over the desert, as the song Stand By Me faded in. “The world’s a big old place,” Noctis comments. “Filled with wonders,” Ignis agrees, just before the camera pans to the sky and the Final Fantasy XV logo fades in.

At this point, I couldn’t help but laugh. FFXV was originally intended to be an incredibly dark narrative, darker than any of the previous Final Fantasy titles, yet here I found myself, laughing at my bros as we pushed a dead car to the reimagining of a 1960’s classic. What kind of opening was this? That said, I was excited. Final Fantasy XV has thus far promised an overarching theme of friendship, as well as a huge world for me to explore. Even though I’m already pretty sure that this game is going to break my heart, I want to see what’s waiting for Noctus and his team.

The narrative became considerably weaker at this point. Despite being a prince, I apparently had no gil, no ATM card, and did not command enough respect to get my car repaired on credit. I met Cindy, whose outfit puts Daisy Duke to shame, and was sent out to work off my repair debt by killing monsters. Conversations are not as fluid or believable as they should be, and there’s no way Cindy’s toolbelt would really hang like that, and while these elements could and probably should be better, they’re not glaring enough to be a complete turn off. Comparing this to the previous demo, FFXV has greatly improved its lip sync, and the graphics are, overall, much smoother and better all around. While it initially upset many fans, it’s easy to see why the decision to delay the release was made; the game has seen significant improvements because of it.

This demo showed significant improvement to graphics and lip sync

I was sent into the open world, and took the opportunity to explore a bit, wandering in the opposite direction from where I was supposed to go. I was delighted by how Noctis reacted to near collisions and sharp movements, twisting his body in surprisingly convincing dodging motions, and I wasted far too much of my demo time seeing how he moved when nearly colliding with a stationary object versus another character. I really enjoyed how my party members bantered casually with each other during fights and while traveling. While I was out wandering, Prompto asked for clarification about our mission, Gladiolus scolded me for waving my weapon about willy-nilly, and Ignius chided me for going the wrong way. All of this happened through voice acting, without my ‘speaking’ to any of my teammates, without text boxes, and without any pause to the game. The casual and unprompted conversation added an interesting layer of camaraderie and sense of identity to each of my friends, and affected me in a surprisingly profound way. The characters became just a little more real and a little less pre-programmed; they spoke to me, I wasn’t having to initiate every conversation.

Wanderlust satisfied, my team and I headed to the indicated spot on the minimap to do away with a series of pest monsters. The tutorial taught one new skill per fight as we dove headlong into the action-based battles. (RIP, turn based Final Fantasy games, I still miss you.) The battle system was simple and easy enough to pick up, though being distracted, unfamiliar with the controls, and not especially good at action games, I managed to miss more than a few parries. My teammates not only took notice, they spoke up. “You wouldn’t be taking so much damage if you’d parry correctly, Noctis.” Yeah, yeah, shut up, Gladiolus. While the ribbing felt well deserved and natural, I get the feeling that if Gladiolus keeps up this kind of commentary, he’s going to end up being my least favorite character. Those who are used to turn-based games, or games with auto attacks will probably be in the same boat. That said, it felt like I was out with good friends who knew me well enough to feel comfortable talking a little smack.

Battles are fast paced, and the system is pretty easy to pick up

I was able to easily switch between three weapons at any time by pressing left, right or up on the D pad, and using the R1 button to warp-jump into battle was great fun, even if doing so put me into battle before the rest of the team, which caused Ignus to warn me against charging in so quickly. Building up combo chains and watching my damage climb was very rewarding. I was disappointed that I was not able to get far enough into the demo to try out the magic system or to ride Chocobos, but I was delighted to find that I could wander quite far early on, exploring well off the beaten quest path. There wasn’t whole lot out to find out there, but being fond of open-world gaming, I still enjoyed the freedom to do so.

For me, the first half hour of Final Fantasy XV was powerful mix of nostalgia, promise, and excitement. Even if some of the dialogue and scenarios were less than believable, I’m already very fond of my teammates and their distinct personalities. I hope that Final Fantasy XV makes good on its suggestions of a friendship-focused plot, and that the personalities and relationships of the four main characters remains a central theme. For now, all I can do is wait, hope, and speculate until the game hits stores on the 29th of November. Want to see some of the gameplay for yourself? Check out the first 45 minutes of Final Fantasy XV in the video below!