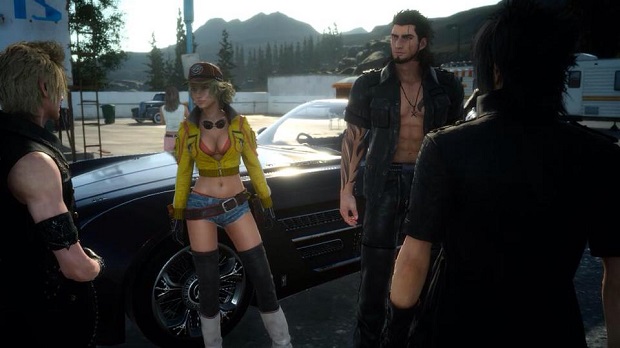 It’s strange to say, but after nearly a decade of promotion and a change in name and platform, I think it wasn’t until I played Final Fantasy XV that I ever felt like I didn’t understand it.

Naturally, Final Fantasy XV is likely nothing like the game we were originally shown under the name Final Fantasy Versus XIII back in 2006, but glimpses of the game as recent as the E3 2013 trailer gave me the sense of was something grand in scale not unlike Final Fantasy XIII’s story of defying gods and established powers. The comradery seen XV’s “Episode Duscae” demo evoked something more reminiscent of the series’ more personal and light-hearted outings like Final Fantasy X-2.

Episode Duscae felt like something not at all connected to the Final Fantasy XV I will ultimately play, and more like a guided tour through the game’s mechanics and character dynamics that made an active attempt to disguise the bigger picture, even if it meant certain aspects coming off as out of place.

That being said, Episode Duscae has me intrigued to learn how the game’s more fantastical elements fit into the grounded aspects of the characters and the world that make the Final Fantasy XV that Square has been working on for nearly a decade.

Episode Duscae centers around a group of four friends attempting to take out a powerful monster that’s giving citizens outside of the big city’s lines trouble in order to raise money to fix their car that’s in need of repairs. This group, led by their kingdom’s prince named Noctis, manages to establish multiple dynamics not in the demo’s few cutscenes, but in the constant banter you hear them take part in while you explore XV’s open-world. There’s a sense of brotherhood to be found in the teasing and pestering characters dish out during even the direst of situations, but also a clear desire on each of their parts to protect one another.

In a time where the industry would likely look down on an all-male cast, Final Fantasy XV undercuts stereotypes and delivers a dynamic between a group of young men that feels genuine and unlike anything we’ve really seen in the series. The closest equivalent would be Final Fantasy X-2, which featured an all-female cast and also created a similarly distinct cast dynamic from previous Final Fantasy games.

XV was initially helmed by Kingdom Hearts director Tetsuya Nomura, and despite his leaving the project, Nomura and Kingdom Hearts’ influence is apparent in playing through Episode Duscae. This can be seen in things as passive as the game’s piano-driven score, to the the game’s action-oriented combat.

Final Fantasy XV gives players a more active role in combat than has typically been seen in other mainline games in the series. Taking a note from Kingdom Hearts, XV is an action RPG that occasionally borders on hack-and-slash territory. Players control Noctis exclusively while the rest of the party operates as AI companions. Each of the characters have separate fighting styles, but they’re most relevant to the player and Noctis when you find yourself with low health, as each of them are capable of reviving a dying party member.

What stuck out to me most about XV’s combat was the way it used MP (Magic Points) in a way that was unlike any other game in the series. In Episode Duscae, Noctis had no access to any sort of spells that Final Fantasy veterans would expect. MP is instead tied to many of your attacks and even defensive maneuvers. Dodging costs MP, high-powered melee attacks cost MP, and using up your points results in being put into a state of near-uselessness until you recharged to a certain point. In theory, this would make fighting in XV about not overexerting yourself in order to hoard points for moments when you’re in a pinch, but in playing Episode Duscae, I felt there was very little incentive to hold back, and doing so actually felt like a detriment to the combat. The reason for this being that, despite the original systems XV has in place, the game’s hack-and-slash combat feels like it’s missing a nuance found in series dedicated to that style of gameplay like Devil May Cry or Bayonetta.

In the situations you’ll find yourself in during Episode Duscae, there weren’t any fights that felt remarkably challenging, and it made using the more experimental techniques available in the demo feel unnecessary, resulting in many combat scenarios that felt straightforward and frankly monotonous. Even Kingdom Hearts, despite its notorious button mashing, found ways to entice players to use more complicated techniques that kept fighting both entertaining to play and watch, and I’m just not getting a sense of that from what I played of Final Fantasy XV. While establishing camps throughout Episode Duscae, the demo clarified that more techniques will be available in the full game, which gives me reason to believe that a combat system with depth is hiding under locked content, but Episode Duscae didn’t leave me compelled with Final Fantasy XV’s more action-oriented approach.

However, despite my irritation associated with what appeared to be some conflicting elements that were at odds with what I’d seen of Final Fantasy XV before playing Episode Duscae, that was all changed as this small portion of an obviously bigger game neared its conclusion.

Undoubtedly, the moment of Episode Duscae that gave me the greatest glimpse into what lies ahead for Final Fantasy XV proper was the moment when the demo allowed me to summon an Eidolon, which I won’t describe too explicitly, as it’s something best experienced firsthand. But in a brief 30-second sequence, Episode Duscae lifted the curtain and showed that this is a small slice of a something greater than anything we’ve seen of the game can likely convey. It was in this moment that I was reminded that Episode Duscae, while entertaining in parts, was the game in its simplest form, likely with the same amount of depth as the full game’s first hours.

Not everything I experienced in Episode Duscae met my expectations as to what a new Final Fantasy should be, but where it counted, it made me all the more excited to play Final Fantasy XV when it comes to PlayStation 4 and Xbox One, and at its best, it left me slack jawed staring at my screen.