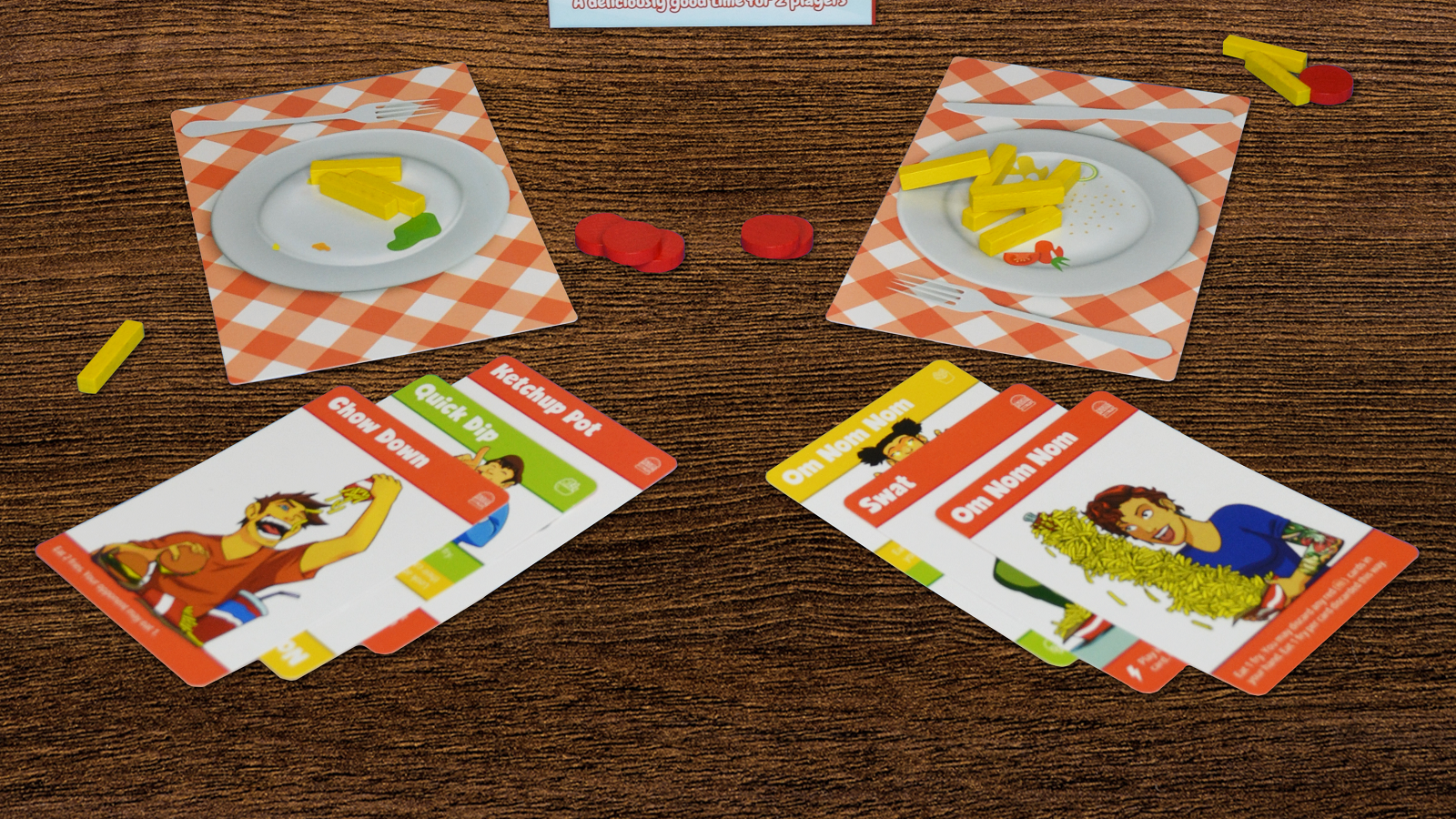 Like many people living in North America, I love me some burgers and fries. I don’t mind sharing my fries either, but there are times when I get irate at someone eyeing my delicious food and swiping it without asking. It seems that Patrick Rauland and Laid Back Games have seen my frustration and have created Fry Thief to recreate the experience of losing your tasty treats to someone who didn’t even order fries. The game is a simple two-player affair with a lot to love, and works for the all-ages crowd. I got to try a prototype of the game, with an improved version available to pledge on Kickstarter.

Fry Thief is an asymmetrical light card game where two players compete to eat the most fries. However, one player initially has all the fries (the fry player), while one has none (the salad player), which means the latter must steal fries from the former in order to eat them. Stealing and eating fries are two different actions, and each must be done separately; just because a salad player has fries on their plate, doesn’t mean they have points just yet. Players will have three cards each, and will draw one during each turn; afterwards, they can play one more card or draw another (with a max of four in a hand). An instant Swat card can prevent a player from playing a card, thus discarding it, while red cards can be played by any player during their turn.

Certain cards will have different effects depending on the player; one card, for example, will allow the fry player to steal one card from the salad player and give the salad player a fry in exchange. On the flip side, the same card will allow the salad player to steal two fries from the fry player. The game denotes these special effects by splitting both effects on different sides of the card, thus halving the space of each card. While it can make some of the flavor text hard to read, it does make for a tighter game with fewer cards to worry about, and clear color schemes to make this easy to understand. The game is over when all fries are eaten, with a fry being one point (and those dipped in with a ketchup powerup being worth two). The player with the most points wins.

I commend Fry Thief for being a simple yet strategic game, with rounds lasting around 10-15 minutes. It was easy to explain to others in less than a minute, after which the game goes by at a brisk pace. Since turn flow is simplistic (one layer draws a card and then plays one or draws another), it’s a perfect game for younger audiences or for those that want a casual card game to play. The card art is suitable and goofy for the game setting, with various people chomping on food or swatting away hapless thieves. The card stock is sturdy enough for casual play, and the plate cards are oversized and fit the fry and ketchup pieces well. I did find the fry pieces a bit too small for my tastes (pun intended), as they’re tricky to handle with larger fingers. I wouldn’t mind more durable fry and ketchup pieces in a later revision.

While I did enjoy the fast pace of the game, I admit there are a few balance issues in regards to the players, as it seems that the salad player has the odds stacked against them. In a game called Fry Thief, this is rather apt, but it means the fry player has a slight advantage. While there are red cards that enable eating fries, there are only three eating cards unique to the salad player compared to five eating cards unique to the fry player. This is justified since the salad player needs to steal fry cards and then eat them, but it means that the person with the fries has a better chance of winning. If there was a passive advantage the salad player would have at the beginning of the game, I feel like it would even the odds just a little. The initial slate of 16 playable cards means you’ll have to reshuffle quite often; having a few more cards would alleviate this problem and add more variety to the final product. As it stands, however, Fry Thief is a fun little game that has a quirky theme and easy-to-learn mechanics.

If you want to help Fry Thief come to life, consider backing the Kickstarter project now, running until February 25. While fully funded, extra pledges will contribute to further stretch goals.