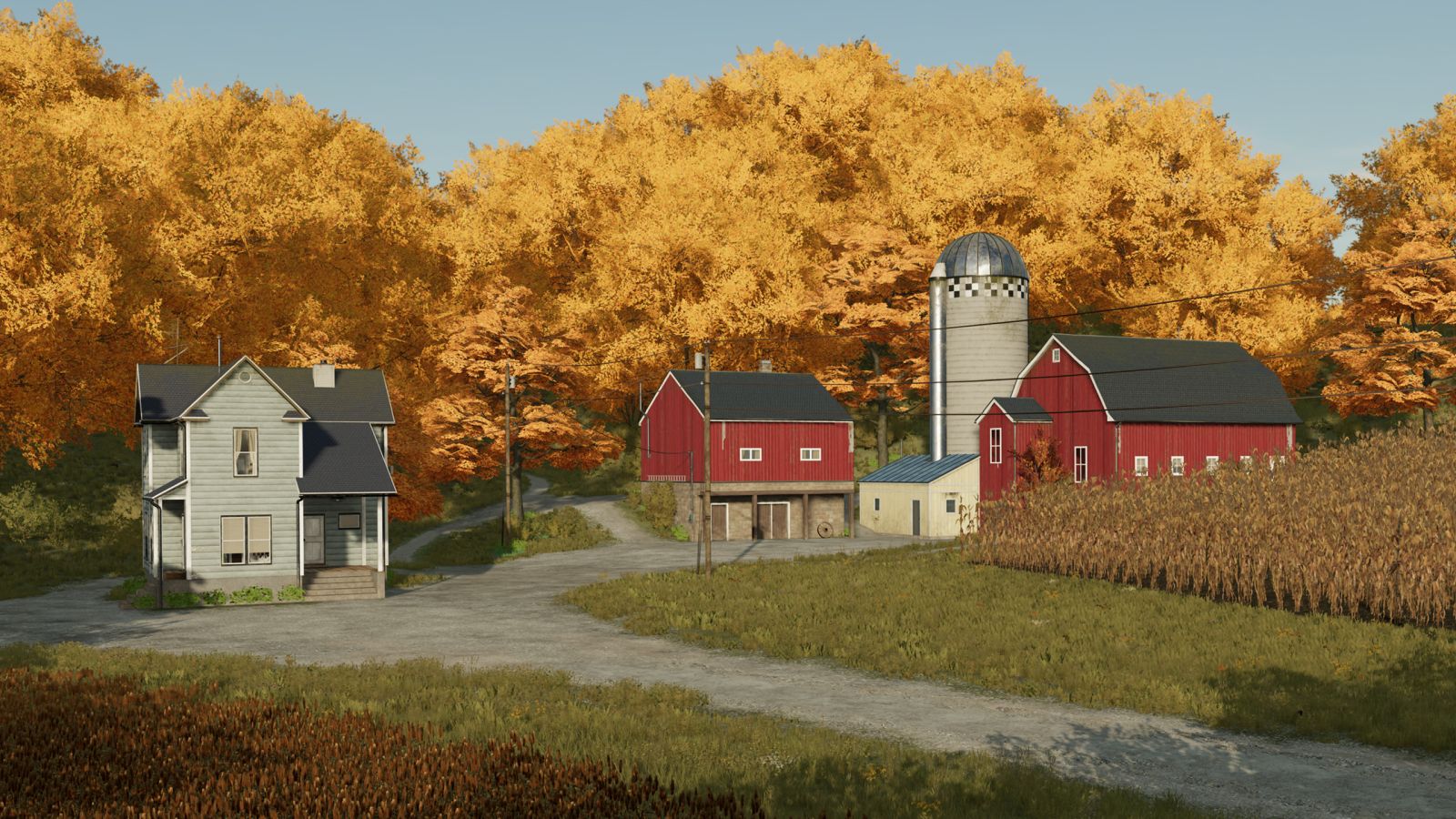 I don’t know a lot about farming, but I know one thing for sure — it’s not as easy as it looks. I’ve recently gotten a look at an early build of Farming Simulator 22, and as a complete novice I have to admit I was a little intimidated. Rest assured though, help is on the way. The team at GIANTS Software has heard us rookie farmers and are implementing a bunch of new ways to bring in new players. Let’s throw on some gloves, fire up the tractor (after we buy one!) and see some of the improvements in Farming Simulator 22.

Having never played one of these games I was immediately surprised at the graphical fidelity. Simulators typically scrimp on the world, focusing more on the tools and workflows at the expense of graphics. Here we get a small farming community right here in the United States packed with details that make it feel like a living world. This new map looks gorgeous and reminds me of places I’ve seen in Texas in the spring. 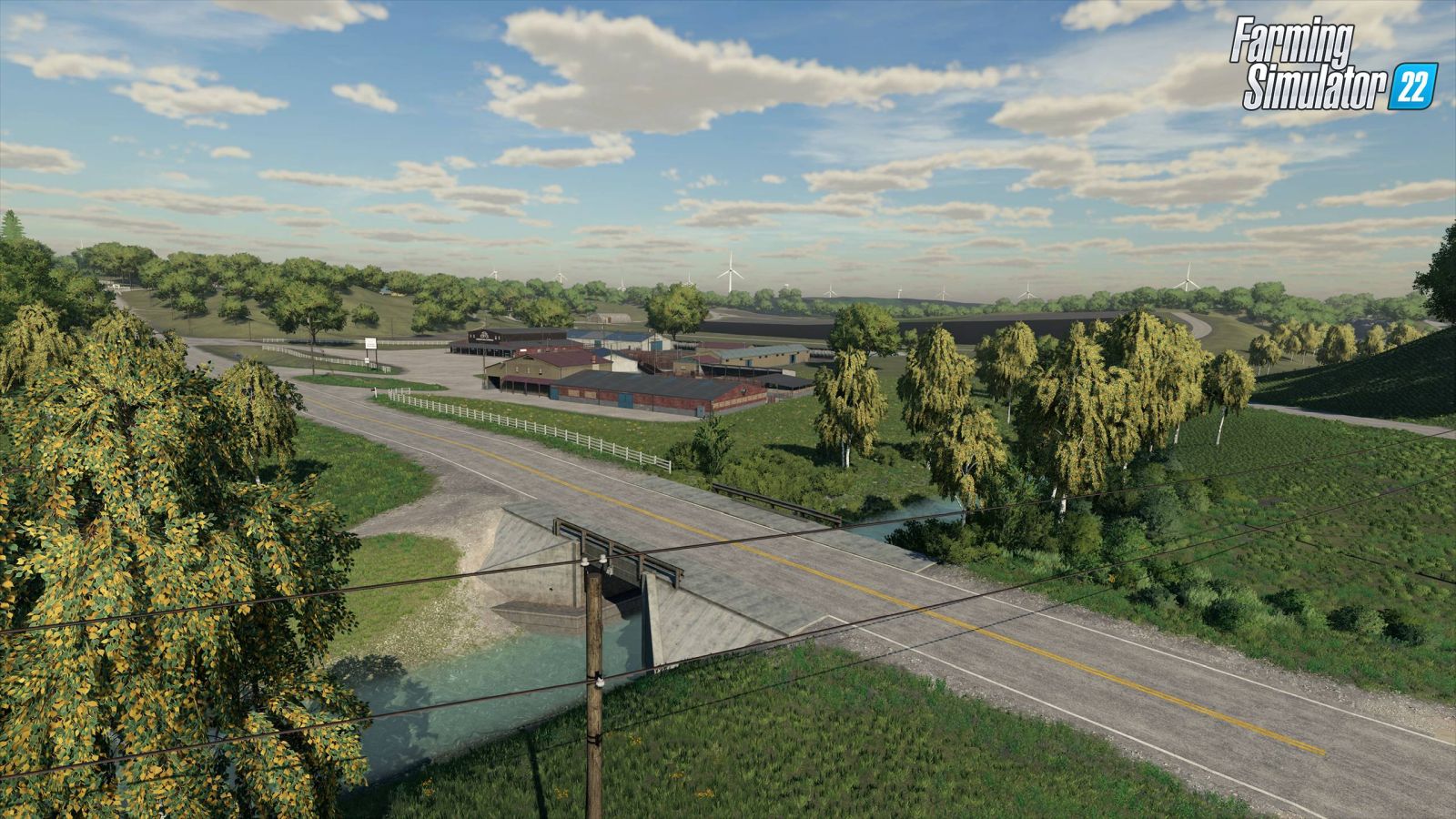 Heading out to Clever Motors, we have to take a moment and figure out what sort of equipment we’ll need for harvesting our wheat crop. In this case we select the Axial-Flow 9250. More than a cosmetic choice, this tractor has specific characteristics that we’ll need for our equipment. It has four wheels in the front to maximize traction under load, a CVT (continuously variable transmission) gearbox to offer us more granular control of gear ratios to suit how much the vehicle will be pulling or pushing, and most importantly a 466 kW / 634 hp engine. This last part is crucial as I saw earlier in my demo when we selected a tractor that was far too light for the equipment, causing it to pop a wheelie and become impossible to steer due to weight. With the right engine for the job, we paid nearly 500k for the tractor, and added a 3162 TerraFlex Draper 45ft harvester for another 90K to head back to the field. Farming is a shockingly expensive venture.

Back at the farm, we dug into the wealth of new features coming to Farming Simulator 22, with the most obvious of them being seasonal changes and all that implies. For fans of the series this isn’t a new thing, but required a mod to integrate. Here we see it folded into the main game for the first time. The GIANTS team accomplished this by simply hiring one of the mod crew that brought it to life! 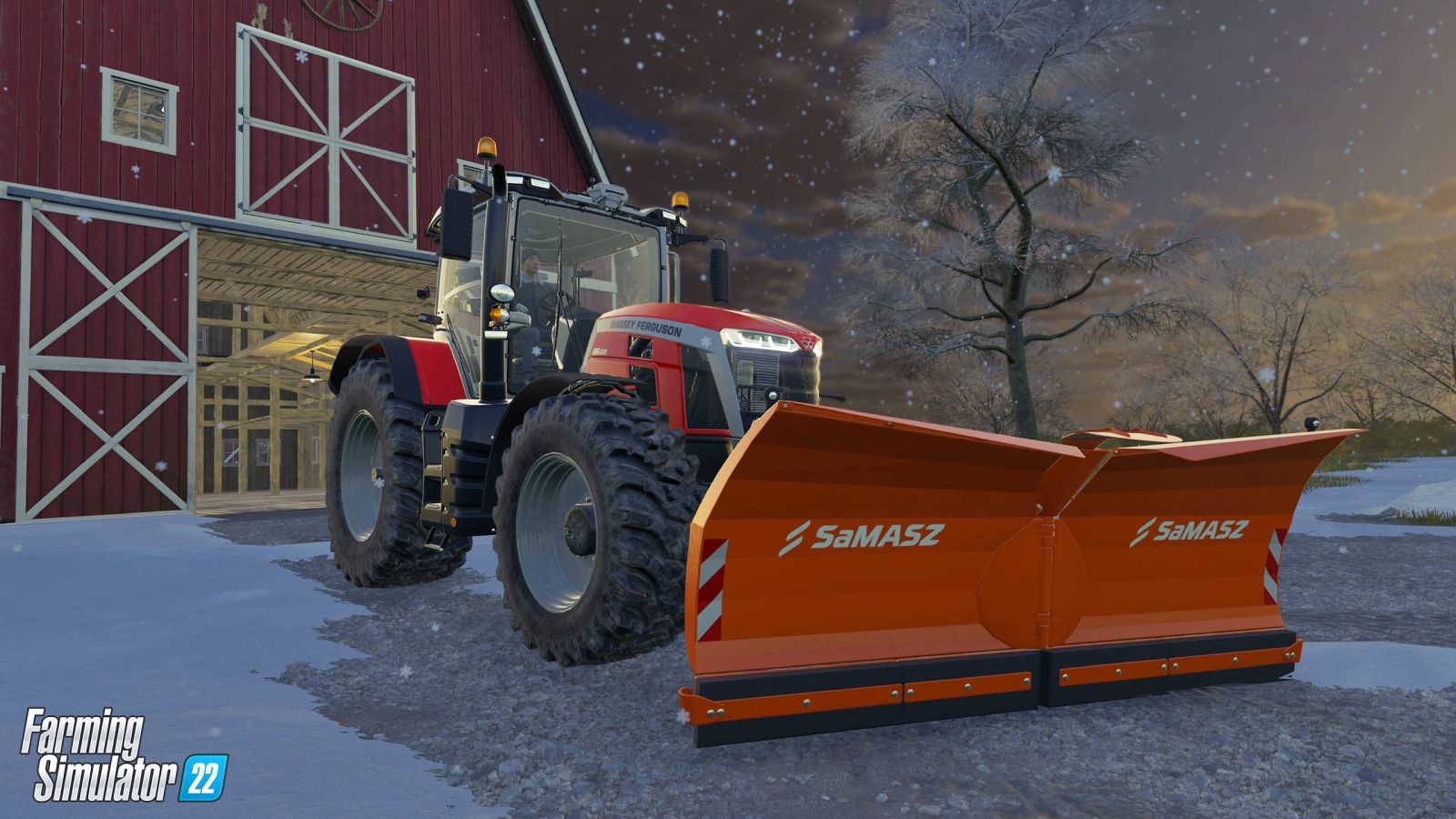 It snows now, so you’ll need a snow plow!

Seasons changing isn’t just a cosmetic thing — it has real gameplay implications that will change what you crop and when. Using a new calendar to see when each type of crop needs to be planted and harvested, you now have to pay attention to when it’ll be most profitable to sell. Be mindful of the weather, though — if you wait till the end of the season and a rainstorm hits, you won’t be able to harvest and your crops will rot in the fields. Price fluctuations, weather, and more can be adjusted in the menus for the game, or you can disable it entirely. If you like the look of other times of the year, but don’t want to deal with the reality of it, you can also set a time of year (“Fixed visual month”) as a purely cosmetic option. — whatever experience is the most fun for you.

To go along with the seasonal updates, you’ll need a way to effectively manage your crops. A new map system with color coding showcases data like which crop is ready to be harvested, which has had their first or second fertilization, their condition (withered, ready for harvest, etc.) and even soil composition. Along with a “New Farmer” difficulty option, this map should help me run a farm this big without getting into too much trouble. 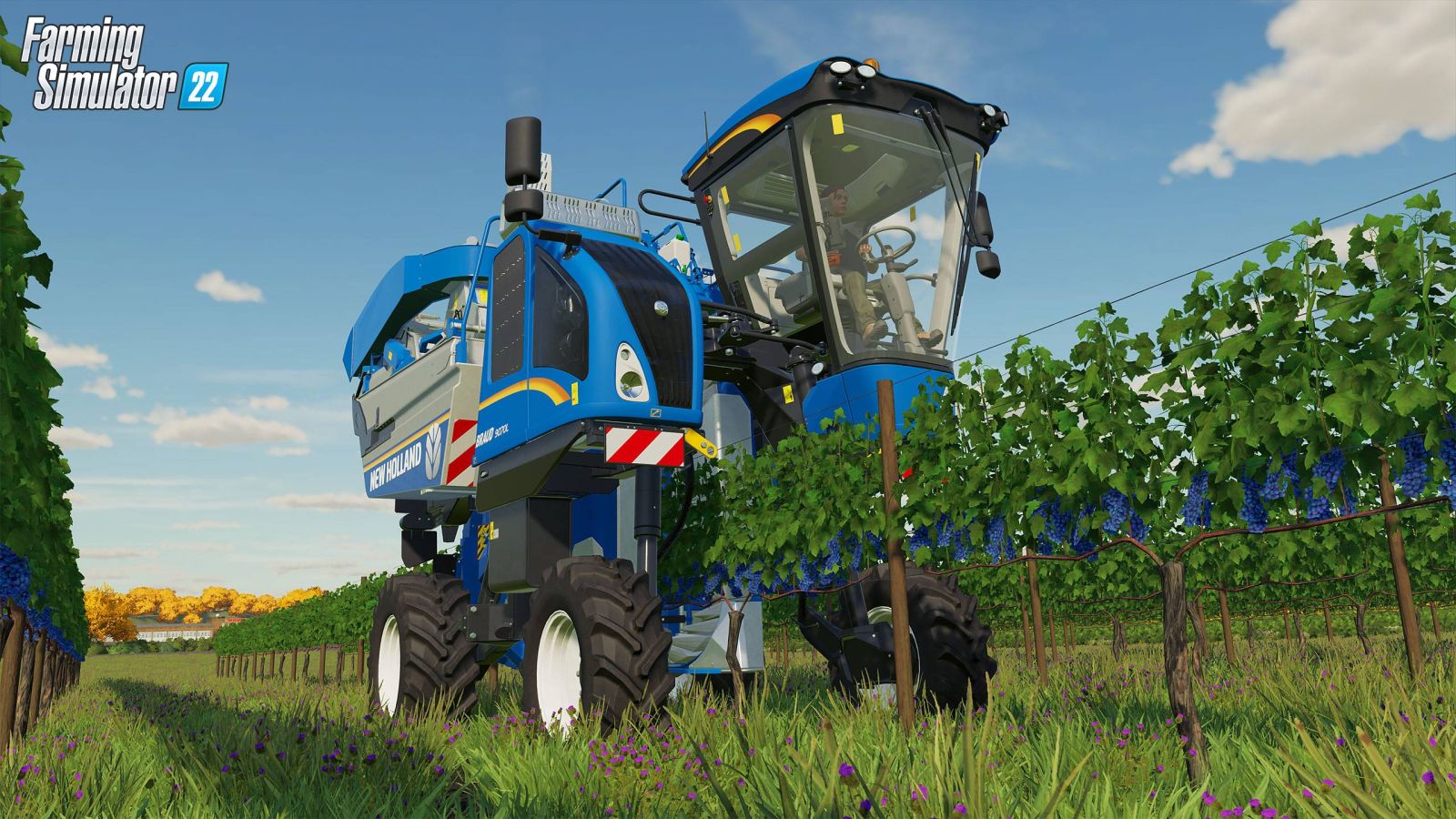 Harvesting grapes — a new crop for this year.

To further help new farmers, the team has also introduced “Packs”. Packs are exactly what they sound like, gathering all of the equipment needed to cultivate the soil, plant, fertilize, sow, and everything in between for most crop types. If you wanted to harvest grapes (one of two new crops, the other being olives) you’d need a more narrow tractor and special harvesters to pull the grapes, prune back the leaves, and reset for the next season. Figuring out these combinations can be a challenge, so having it all gathered into a pack option will let you get back out there into the soil, instead of spending your time at the store. 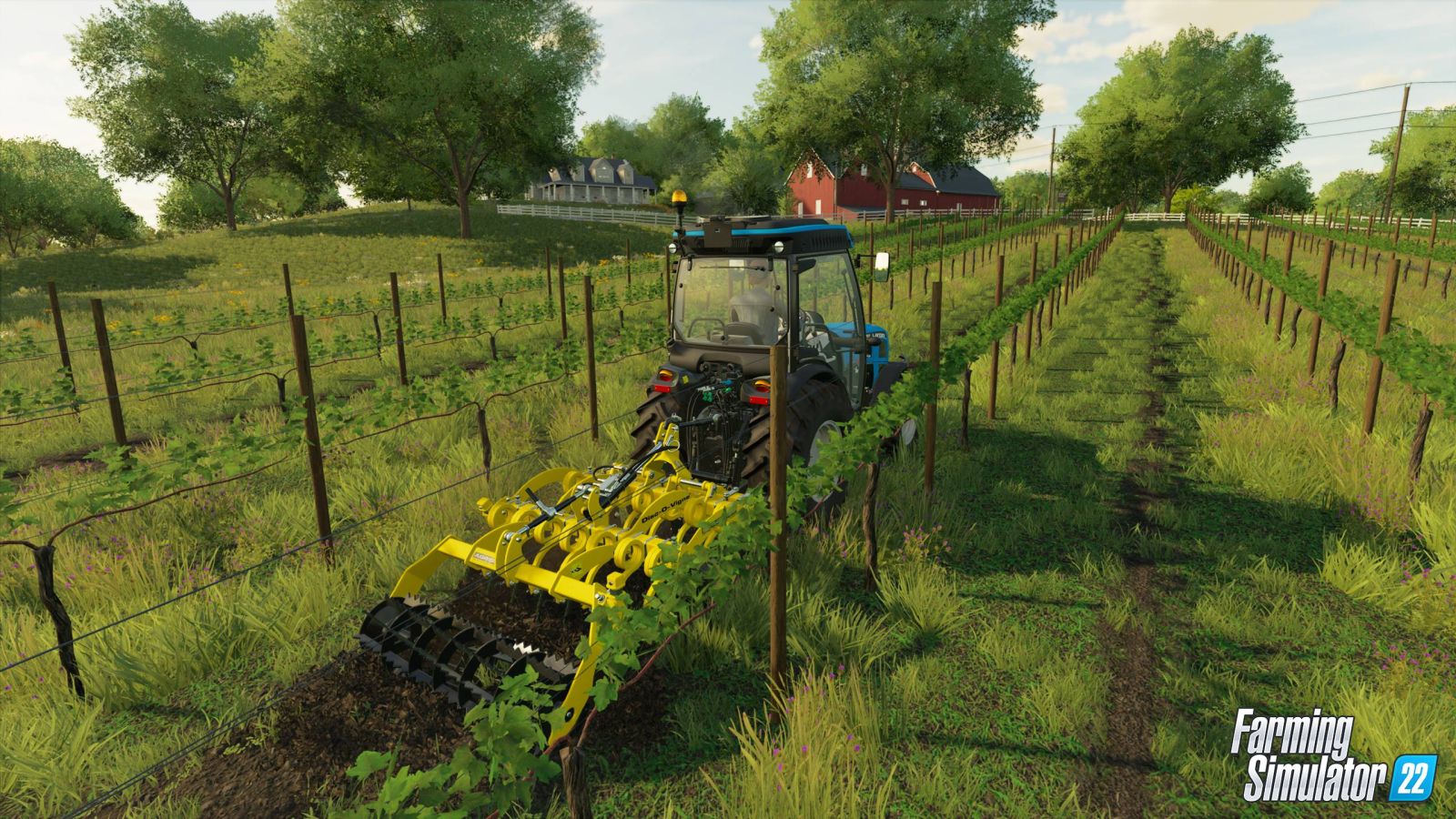 Narrower tractors are needed to fit in between your grapevines.

Along with the new crops comes a new mechanic to create production chains. For example, those grapes we picked can be turned into raisins, or we could create canola oil with the olives we planted. Similarly, there’s a brand new reason to store your various crops — fetching the best pricing. Dovetailing into the new seasons is a pricing grid. Holding onto a crop too long might see the prices slip out from under you as the seasons pass, so be mindful of your timing if you want to make the most cash possible. Having seen how much a seeder that will fertilize as it sows costs, I want to wring every possible penny out of my fields. 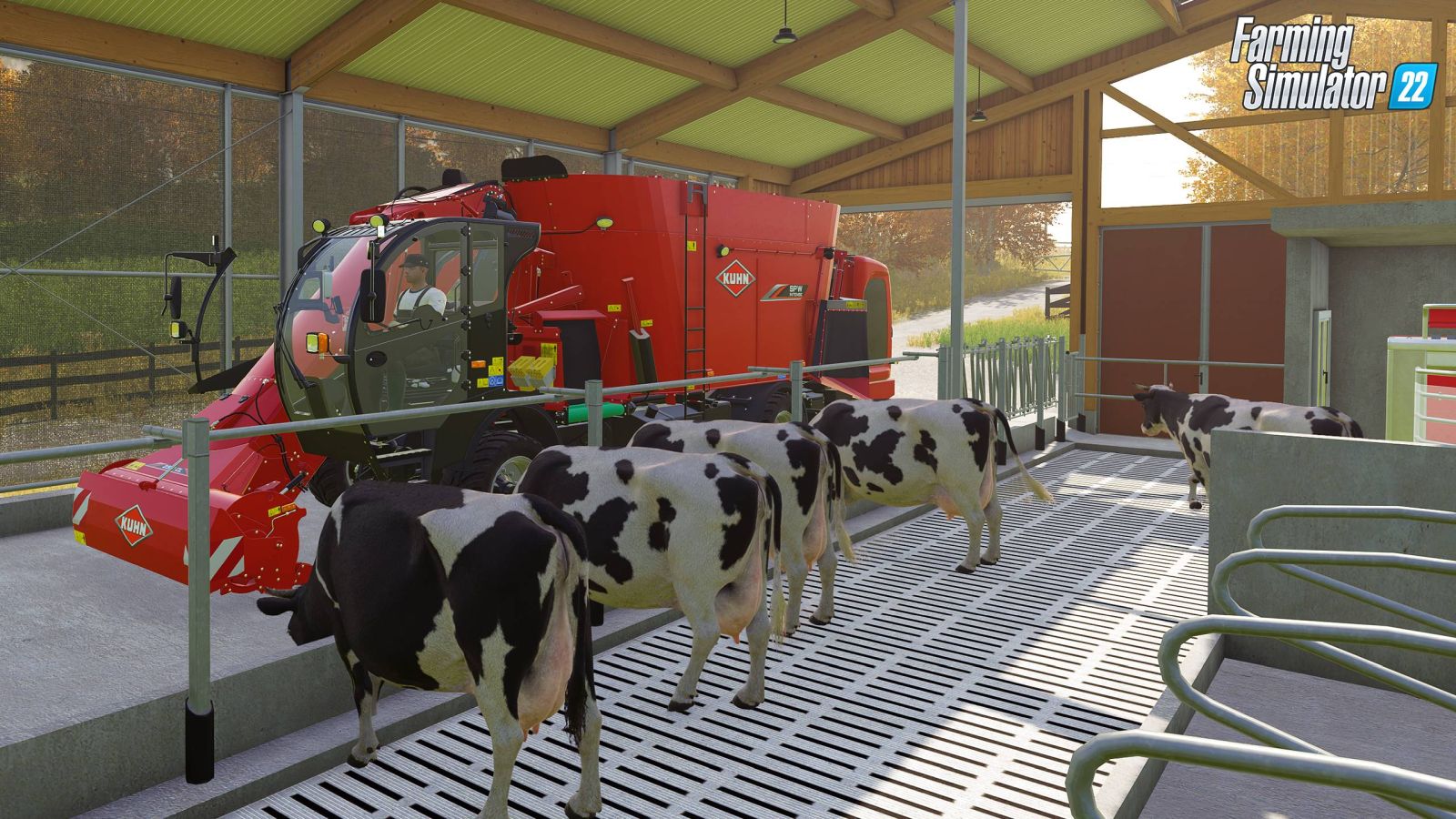 Animal husbandry is in the game as well.

I came away less intimidated by Farming Simulator 22 than when I started. The game will come with brand new tutorials and difficulty levels, and there are a lot of toggles that can customize the difficulty to my rookie farming experience. A peaceful game about planting sorghum (whatever in the world that is) might be exactly what I need to relax when the game ships on November 22nd, 2021 on Xbox One, Xbox Series X/S, PlayStation 4, PlayStation 5, and PC.