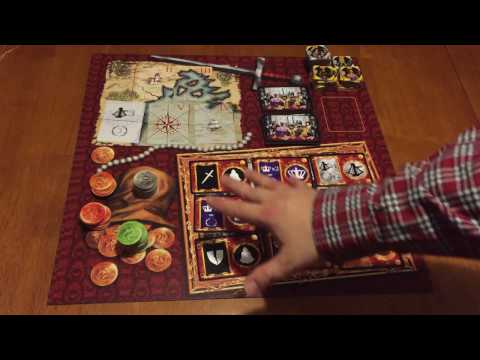 Many authors use the conflict of noble houses to drive the story. From Game of Thrones, The Tudors, and others, the power of the respective house is more important than life itself. The houses can gain power through multiple avenues. But what about becoming the head of your own noble family?  Metras takes this idea and brings it to the tabletop.

In Metras the ultimate goal is to gain the most Influence Points (IP) at the end of the game. You have four different resources to help attain this goal. You start with a player board showing four different branches representing your Fame, Exploration, Wealth, and Espionage. These values change depending on the Allies and Servants you recruit during the game. At the beginning of the game you start with ten IP and two starting allies, one of which can immediately help your Fame and Exploration, while the other gives a boost to either your Wealth or Espionage.

Metras plays over five rounds. At the beginning of each round a new Exploration is turned over to show what turn it is. Mission cards are dealt to the board totaling one more than twice the number of players, so seven in a three player game and nine in a four player game. These determine the actions you take during the next phase of the game. Each mission card has the branch being used on the right side of it, while the left side indicates the action it performs. Actions include earning IP, recruiting allies, taking on exploration missions, and stealing from your opponents.

Each player starts the auction phase with two cubes. The player with the Emperor’s Favorite token earned at the end of turn by having the most IP, places a cube on a mission card to put it up for bids. The player bids in IP with a minimum of zero. Players bid or pass in turn. Those who wish to bid place a cube of their color on the card and raise the bid. As bidders drop out, they take their cube back. The player winning the card pays their IP, takes the card, places it on his player board, and leaves the cube in the spot where the card was located. The Emperor’s Favorite token is passed to the first player to the left that has bidding cubes until all bidding cubes are left in the action card area on the board.

During this resolution phase the allies can be gained, but there can’t be more allies and servants associated with each branch than the current turn. The allies and servants raise and lower the value for each branch. After all players have resolved their mission cards each player gains as many IP as their wealth, and the Emperor’s Favorite and Supplicant tokens are awarded.

Metras speeds up auctions to limit downtime, gives interesting decisions, and provides multiple paths to victory. Look for more details in the video and the Kickstarter page.