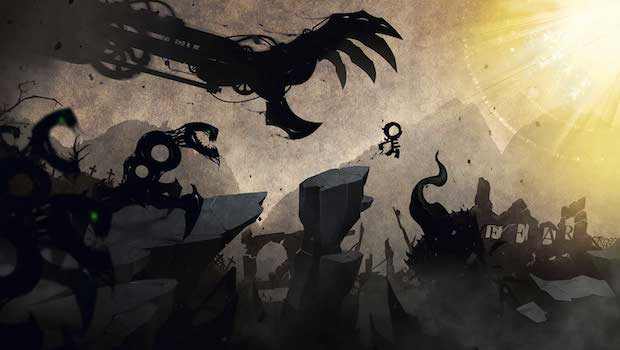 A wise man once said, “The pen is mightier than the sword.” Words can topple regimes and enrapture millions, and in Typoman, words are everything. I got to demo the puzzle-platformer from Brainseed Factory in an early build on the show floor, and the intersection of words and gameplay into one cohesive experience blew me away.

The protagonist, a small stickman formed of the letters H-E-R-O, is in search of his lost arm – only you find yourself in the middle of something much greater. The land has been ripped apart, traps and dangerous mechanisms litter the terrain, and your quest takes you right into the heart of it.

Words merge in the world to create a seamless world.

Everything that is manipulable in Typoman is made of letters. By forming letters into words, you change the environment in emergent, exciting ways. I was faced with a series of spiked crushers I had to pass through. When slamming down it formed the word “crush,” but when the way was open and the spikes were up, it was the word “rush,” compelling me through the safe area.

On-screen prompts both direct you forward and further the typographic aesthetic.

After rushing through them, a third awaited that was slamming down repeatedly, so fast I couldn’t cross safely in time. Nearby, though, there was a number of letters. I mixed together H-A-L-T and the crusher stopped. Talking with Brainseed Factory CEO Bilal Chbib, the crusher doesn’t only respond to those letters, but to a number of other combinations that are possible with the letters provided: S-T-O-P, S-L-O-W, most word combinations will work for puzzles, and the game easily accommodates variation within the letters given to you.

Adding letters to words in clever ways allows you to bypass obstacles.

While the main story is simple on the surface, the underlying tones convey much deeper meaning – themes of freedom, censorship, oppression and the power of words. Sensors that detect nearby letters and destroy them act as censors, and there’s a constant theme of the power of words against obstacles and enemies.

My demo was a short run through a number of the game’s features, but I came away enthralled with Typoman. The concept alone is exciting enough, but the execution is incredibly well done and feels intuitive. Typoman has those key “ah ha!” moments that make puzzle games so intriguing, and it does so in a way no other game is. This is certainly one unique indie to keep your E-Y-E on.