Playing games with other people is typically a great time, no matter if it’s in person or online. That being said, the events of 2020 have made online gaming more popular than ever. Recently I was able to sit down for an online, hands-off session with Mythical’s upcoming MMO Blankos Block Party to get a glimpse of what we can expect later this year. Games revolving around toys have been plenty successful before, so there’s hope for this one as well.

Blankos Block Party is an interesting MMO where you control one of the Blankos, virtual vinyl toys that you collect. Controlling your Blanko, you’re able to explore The Junction, which is the Blanko hub world. Throughout this world will be other players, NPCs to talk to and do gigs (quests) for, areas to explore, and in-game locations that lead to places like the shop and user generated content. It gives you a fair bit to do, and you can even earn new accessories from the gigs. For example, I watched the dev complete a gig and earn bat wings, which he used to fly around The Junction. In order to keep content fresh, they’ll be implementing seasons that switch up gigs and challenges in daily, weekly, and monthly fashions. I mentioned that you could reach other menus through in-game locations, but you can also quickly get to them with a button press if you don’t feel like walking everywhere. I recommend walking around at least some of the time just so you can take in more of this quirky looking hub world. 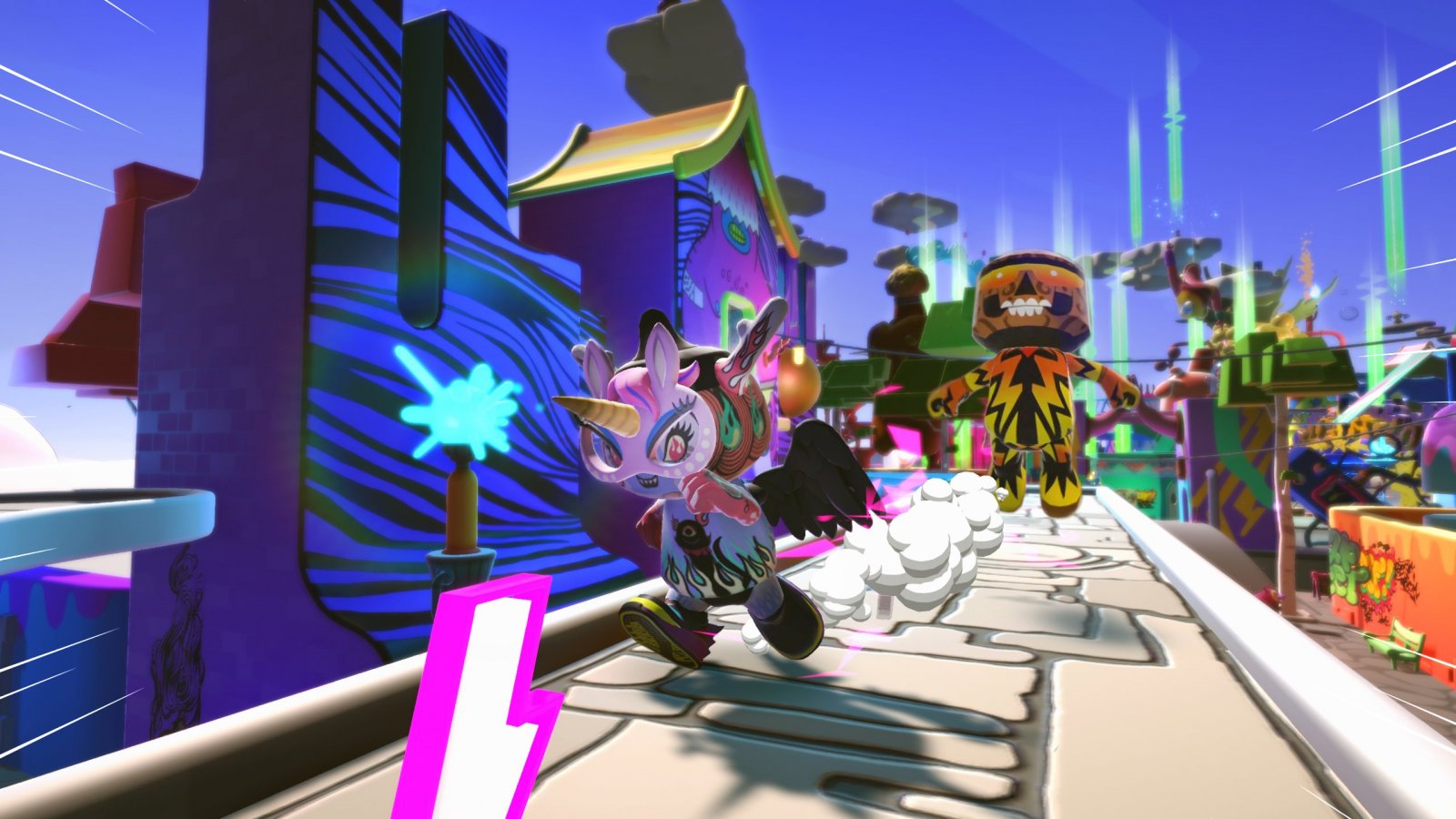 Besides the hub world, you can also visit The Bazaar, The Shelf, and The Party Bus. The Bazaar is where you can purchase new Blankos through the use of blockchain technology. The players will decide how the market functions, including prices, demand, etc. in a bid to give players control over the world of Blankos. There will even be proof of transaction history and ownership for all assets, which is a nice touch. It adds a sense of uniqueness to each Blanko, especially if they somehow are connected to a famous Youtuber, streamer, or any other sought-after person. The Shelf is where you can organize all the Blankos you own on display shelves. It gives you a chance to marvel at your virtual collection; it’s what some people do with real collectables, but this takes up a lot less space.

The Party Bus is where the user-generated content will live. Maps created by players and Mythical’s developers will be available here; these include game modes such as racing, collection, tag, and shooting. Whichever of these modes appeal to you. you’ll likely find a few maps to play around on. During the event, I got to watch the dev do a few races and a team-based shooting map. The gameplay looked smooth and fluid, and I didn’t notice any stutters or lag. An energy source called vibe is used in order to activate abilities such as flying, dashing, performing ground pounds, and more. Not only were these used in The Junction, but they also provided an advantage when playing games. I even got to see some of the weapons available in Blankos Block Party, such as the cactus grenade launcher, the unicorn sniper rifle, and the rocket launcher.

Don’t forget that you as a player can also create maps. You’re given plenty of assets to use in order to build, shape, and tweak your levels to your heart’s content. You’ll be able to tweak parameters such as object size, item spawn points, timers, teams, number of players, win conditions, ammo amounts, friendly fire, soundtrack, and more. The best part: you can swap between building and testing with just one button press. There’s no saving and exiting, or having to load the level up to be tested. Just press that button and you immediately hop into play mode and vice versa. It’s incredible how seamless and smooth the transition is, and I’m looking forward to trying it out myself. As with many games with user-generated content, there are rating systems for players to show how good they think certain levels are. This is always helpful in finding and highlighting the truly creative maps that deserve to be seen. 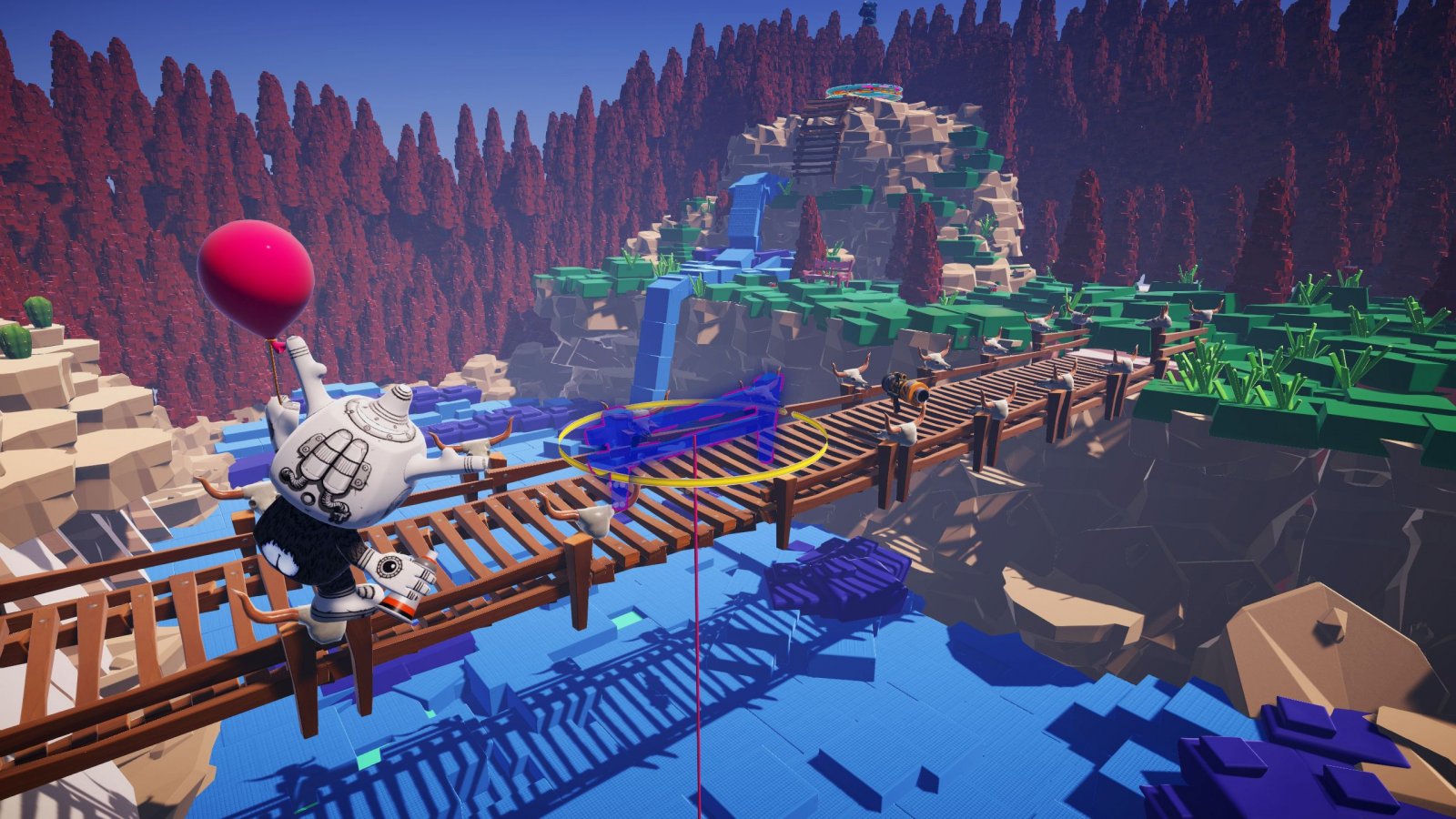 When thinking of online games, communicating with other players is a key aspect that comes up. When asked about this, the devs mentioned that Blankos Block Party will start off with text-based chat, but it will be monitored in order to maintain a safe and fun environment for players. Depending on how that works out, they may look into other forms of communication, but protecting players is the main concern before opening up any other chat options. With its playerbase as a priority mindset, hopefully it means that Mythical will provide plenty of entertaining content for players.

From what I saw during the event, I can’t wait to get my hands on Blankos Block Party and explore that wacky little world on my own. It looks cute and charming, but not overly cute and cuddly. It walks a middle-ground that I honestly prefer. As for the user-generated content, I want to see what people can create and see how well I can conquer their creations. With a strong enough community, games like these can thrive, so here’s hoping. I’ll be back with a hands-on look later this year, so keep an eye out for some updated vinyl toy action.