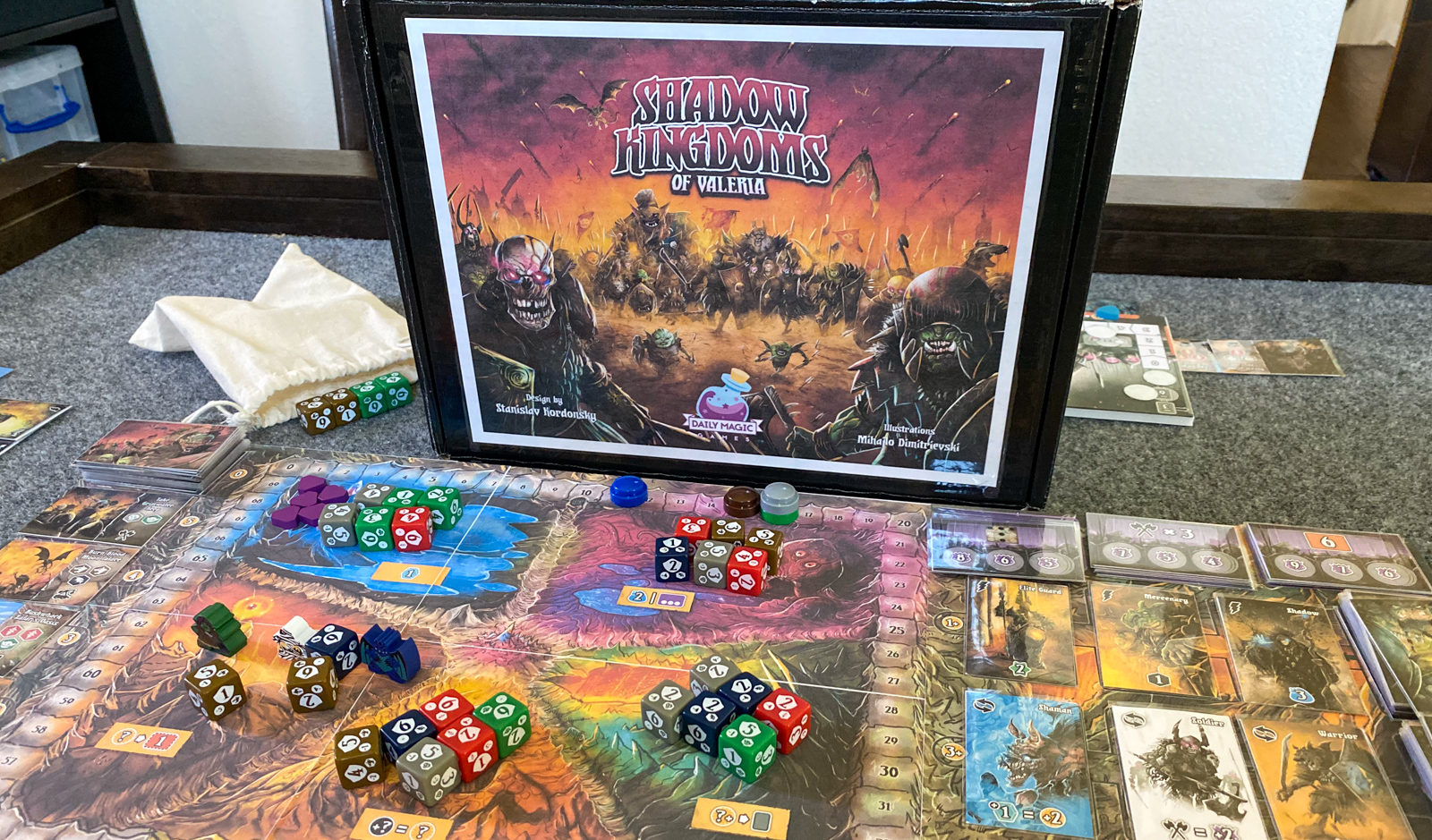 The relationship between theme and game can be a curious thing. Sometimes the theme is what drives core gameplay mechanics, such as Rising Sun’s mythological take on feudal Japan. Sometimes the theme is more about look and feel, a looser connection to mechanics. Catan, which plays largely the same with a Star Trek or Game of Thrones theme as it does the original ‘Age of Discovery’ version, is a perfect example of this. Another interesting approach is to set a theme and let the narrative of the theme play out over several games, not as a sequel or expansion, but rather, multiple distinct experiences that all belong to the same world. Renegade’s West Kingdom trilogy is a notable example, as is the Valeria Universe games by Daily Magic. The latest game in that series -Shadow Kingdoms of Valeria- hits Kickstarter next week, and we got to spend some time with a prototype. 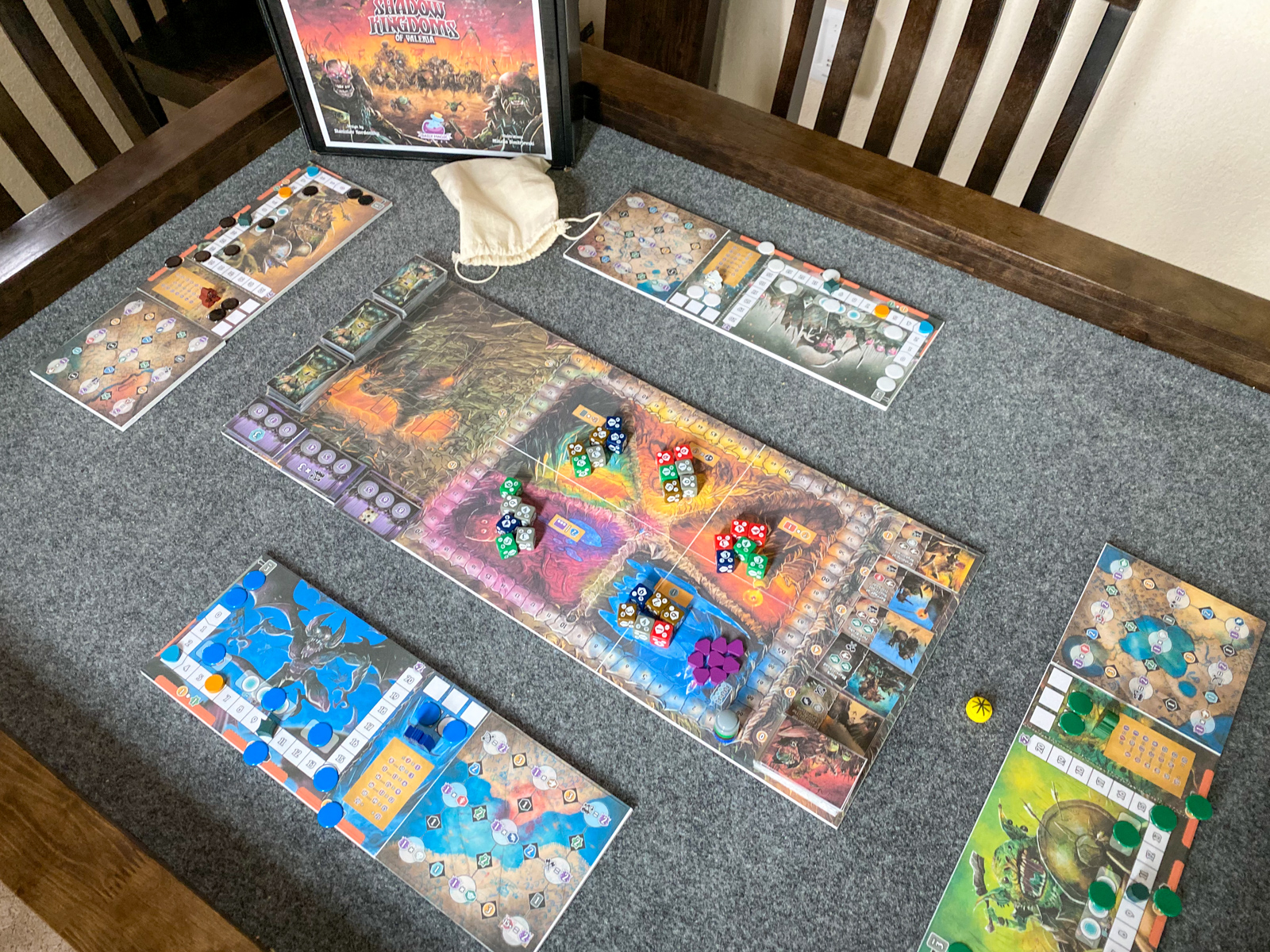 The dice are the only components of this prototype that will be identical to the final product.

Now it’s time to look at the Valeria Universe from a darker perspective. The monsters are fed up with the Humans, Elves and Dwarves encroaching on their lands and slaying their populace. It’s time for monster-kind to take back what was once theirs. It’s time for the Shadow Kingdoms of Valeria!

First off, this is not a card-driven experience like the previous Valeria games. Shadow Kingdoms of Valeria is at its core a dice drafting engine-building game. Each player controls a Warden of the Shadow Kingdoms, taking turns visiting the five shrines to collect troop dice, recruiting champions, gaining gems, magic and gold, and purchasing battle plan cards along the way. Each warden represents one of the five troop factions on the dice: Orc (red), Gargoyle (blue), Goblin (green), Skeleton (grey), and Gnoll (brown). Players must move their Warden each turn to one of the dice-occupied shrines or to the camp area on their player board to initiate a battle plan. Battles are fought, with victory points awarded determined by troop strength and bonuses awarded through the campaign board and/or champion cards. Once a player completes their seventh battle plan, the game is ended and victory points are tallied to reveal the winner. 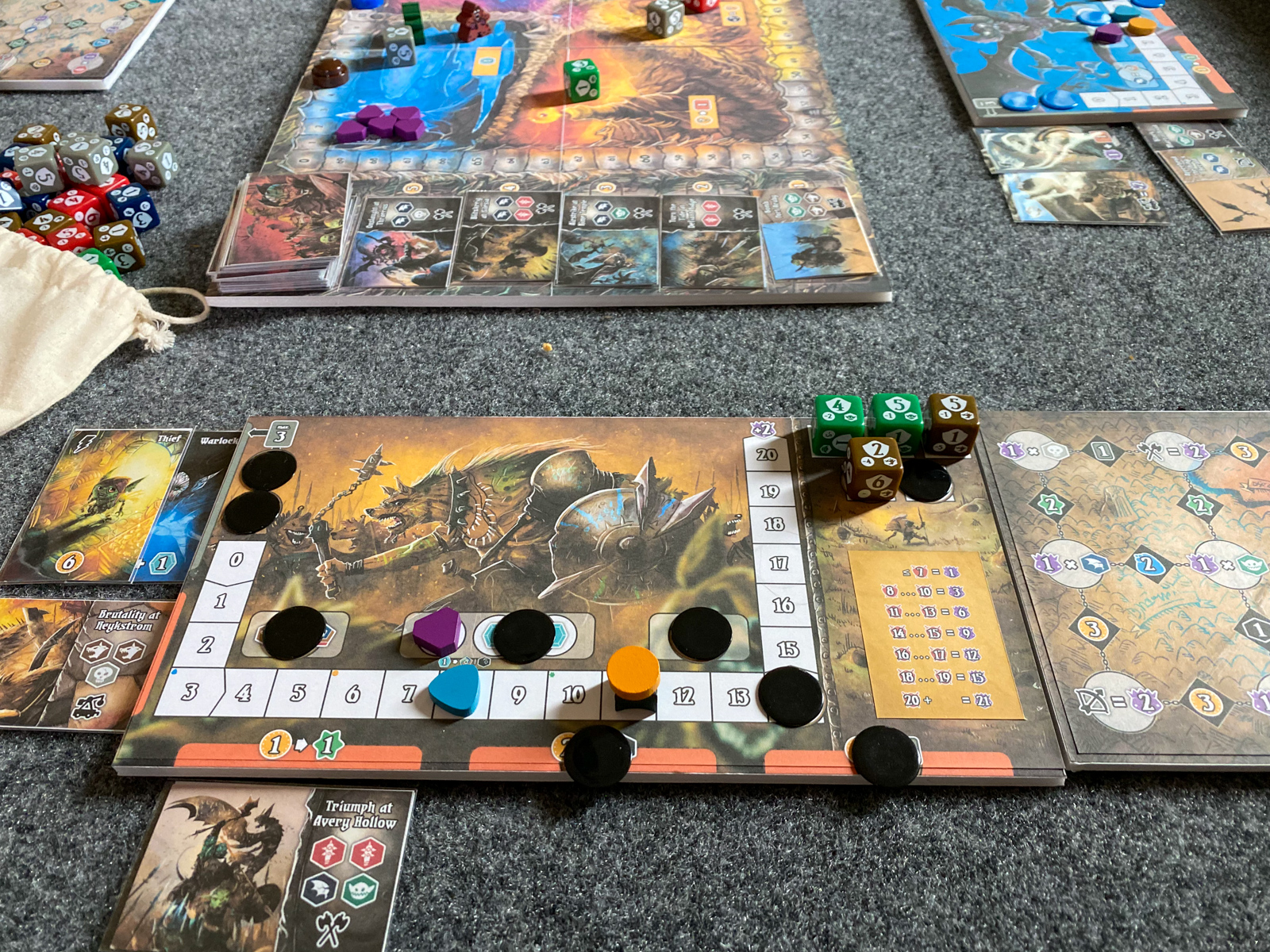 At the beginning of the game, dice are pulled from the dice bag, rolled, and placed on each of the shrines in numbers according to how many players there are. Once there are only four (or less) dice on the board at the beginning of a player’s turn, the appropriate number of dice are pulled from the bag, rolled, and placed on each shrine, replenishing the stock of troops to be recruited. Of course, dice represent warriors, with the largest number on the face denoting strength. There are two other indicators on each side- one is a value that only applies to gold (negative for discounts on champions and battle plans, positive for how much gold you collect at the gold shrine), the other is an icon representing the troop faction (also helpful for colorblind players). While the values of the dice are set when they are placed on the game board, there are ways to change those values when going into battle, either by using a magic point to raise or lower a die value one increment, or using a gem to flip the die to the opposite side (such as turning a one into a six). This can only happen in battle, however. The die must have been recruited already. 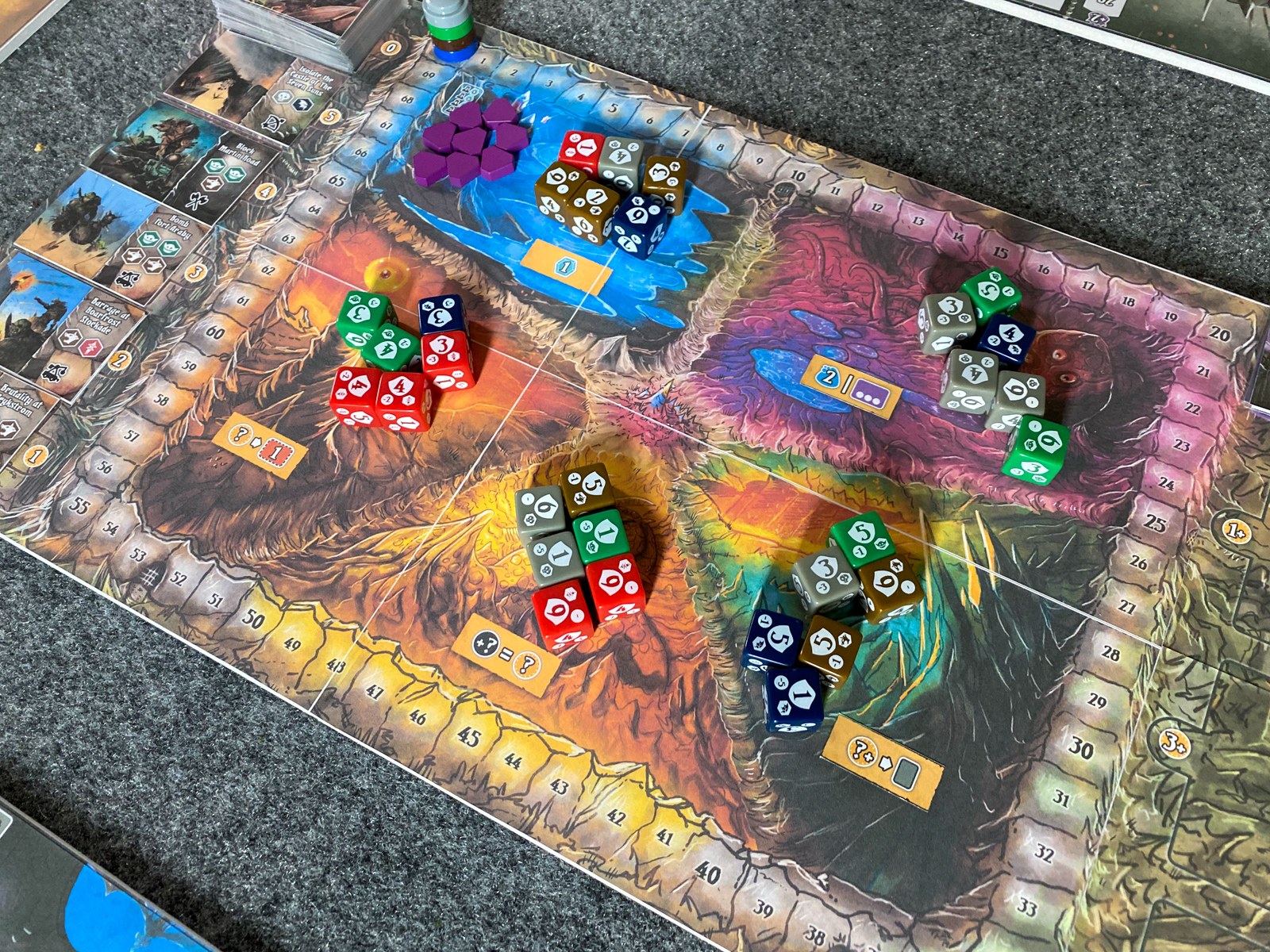 In addition to shrines, the game board is also populated by three groups of cards: battle plans, Champions, and Awards. Battle plans are dealt face up into the five slots, each with a monetary (gold) value starting from one to five. These cards can be purchased and held in reserve by a player after their warden visits the tactics shrine, with dice trooper discount values applying to the cost, or a player can instead opt to go straight to their camp and pay full price for a battle plan of their choice to use right away (which is crucial, as dice troops can run out on that shrine making it inaccessible). Battle plans indicate which faction dice are required to engage in battle, as well as a battle type. On the other side of the board are three rows each with four card slots- champions. Instant champions line the top row, providing one-time rewards of resources, troops, or even victory points. These champions still count towards the player total (which can be upgraded). The second row holds ongoing champions, which provide bonuses for the duration of the game. The last (and most expensive) row displays end-game champions, which grant additional victory points after a player completes their seventh battle plan and ends the game. Dice discount values count against the cost of champions, but that cost will go up the more of the same champion type you already possess. Champions are recycled back into their respective decks every time dice counts are refreshed in the shrines. Finally, awards provide an alternative action at the magic shrine later in the game, giving big victory point boosts for players who meet the criteria of the face-up cards, and are the only spots outside of the campaign board where a player can place an upgrade chip. 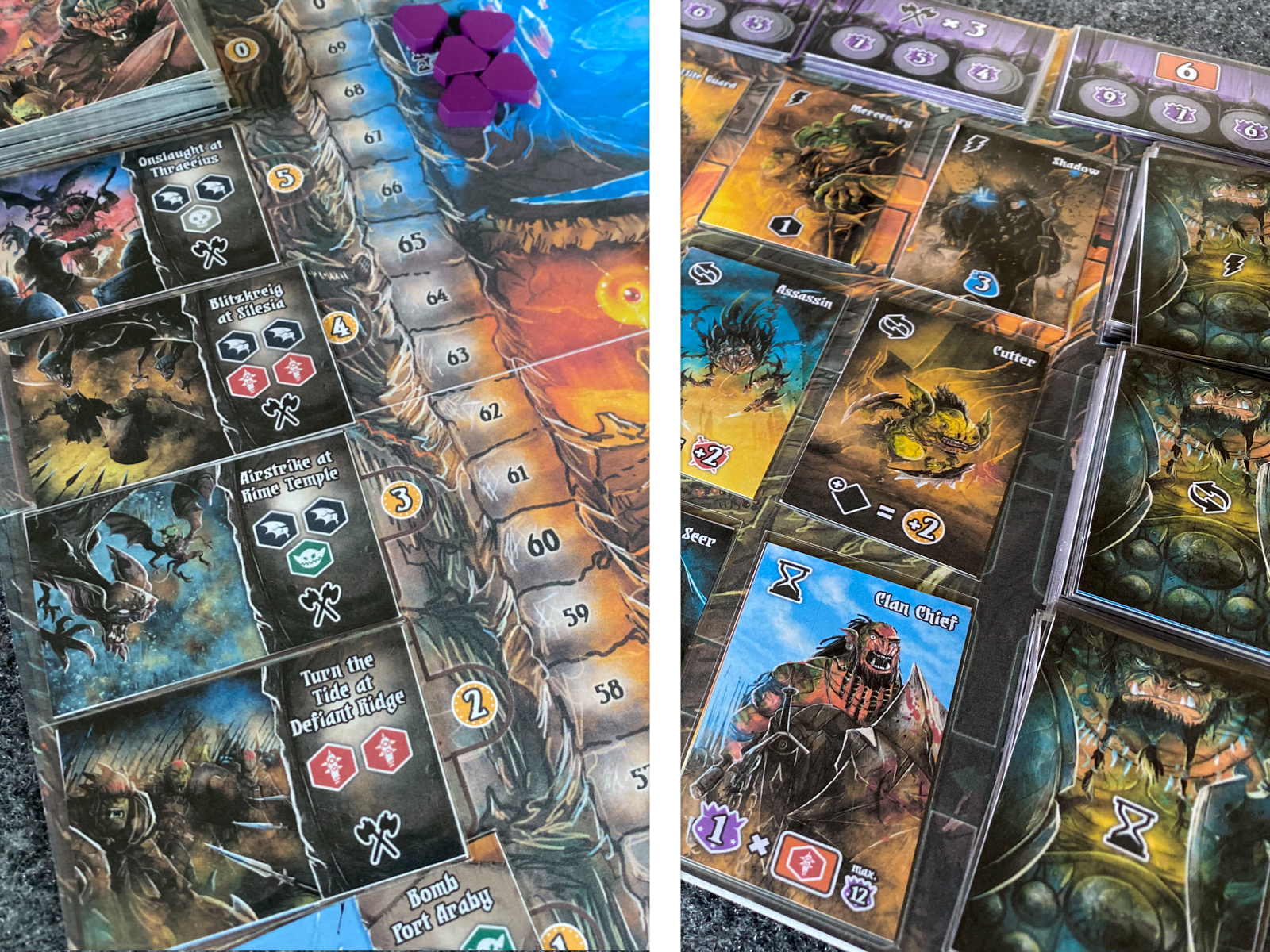 While the central game board is where players get stuff (troops, champions, resources, etc.), the two-piece player mat is where everything happens. The faction board tracks your game currencies, houses your troops after they get recruited, and -as more battles are won- reveals unlockable abilities in much the same way that Stonemaier’s Scythe handles upgrades. The campaign board tracks your battles with nine skirmish areas, each with their own bonus (though only seven of them will get used). As battles are fought, a marker from the faction board is removed to reveal a new ability (ex.: increase capacity for troop dice from three to four), and then placed on the desired skirmish area, conferring a bonus depending on a matching element of the battle plan (ex.: 2 bonus victory points for a siege battle plan). As the campaign board fills up, chain bonuses are triggered by covering adjacent skirmish areas. 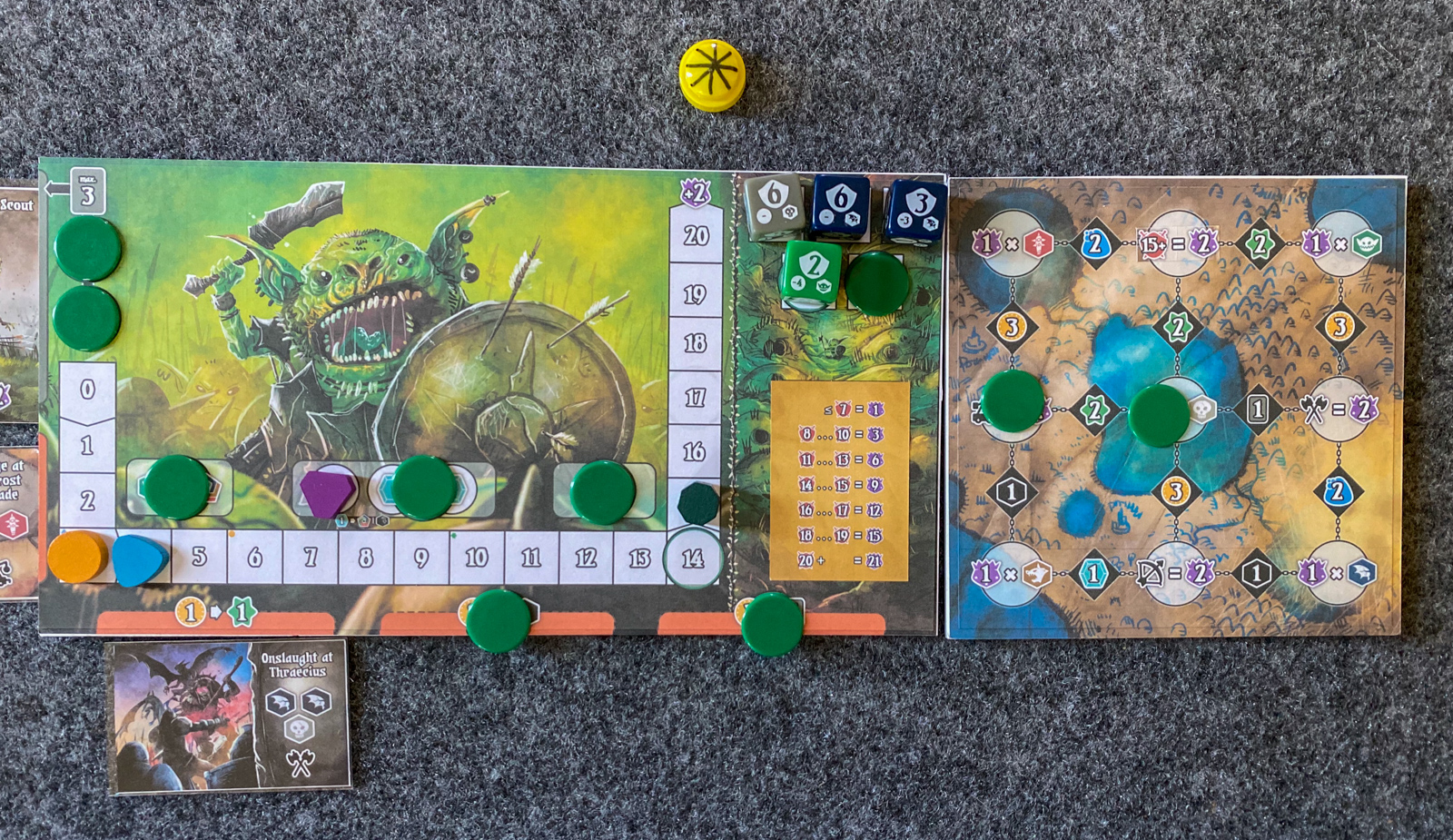 This is where the action happens

Central to the faction mat is the numerical track that accommodates three separate game currencies. Gold is the easiest to accumulate, and the easiest to spend. Magic can be readily acquired in small amounts, and the die adjustment properties don’t become too useful until Influence is raised. Influence can only be gained, it is never spent or lost, and is somewhat more difficult to find, with the only repeatedly reliable method being the ability to pay a gold for an influence when you reserve a battle plan in the first slot. More importantly, influence determines the maximum attack value your combined troops can have. If the dice you commit to battle add up to fifteen but your influence is eleven, you attack value is eleven, no more. This sets a fairly low cap for victory points awarded in battle during the early part of the game. Furthermore, the track has an upgrade slot that keeps the maximum amount for gold, magic and influence at thirteen until its chip moves over to the campaign board, making this upgrade a smart play for a first or second battle maneuver.

The faction mat upgrades chosen and the skirmish area and chain bonuses acquired represent the strategic heart of the game, and provide extensive variability during the course of play. How you order your unlocks in relation to your opponents can make all the difference, and besides what I’ve already mentioned, there are a ton of choices: Gems are the most powerful resource for manipulating dice value and color, but you can only possess one at a time until you commit to the upgrade that allows for two more. Each faction mat has an unlockable that allows dice that match the player’s faction to act as ‘wild cards’- players can choose the color/faction to fulfill battle plan requirements. Additional reserve battle plan slots can be unlocked as well, providing triggers that allow the player to trade gold for additional dice and champions. 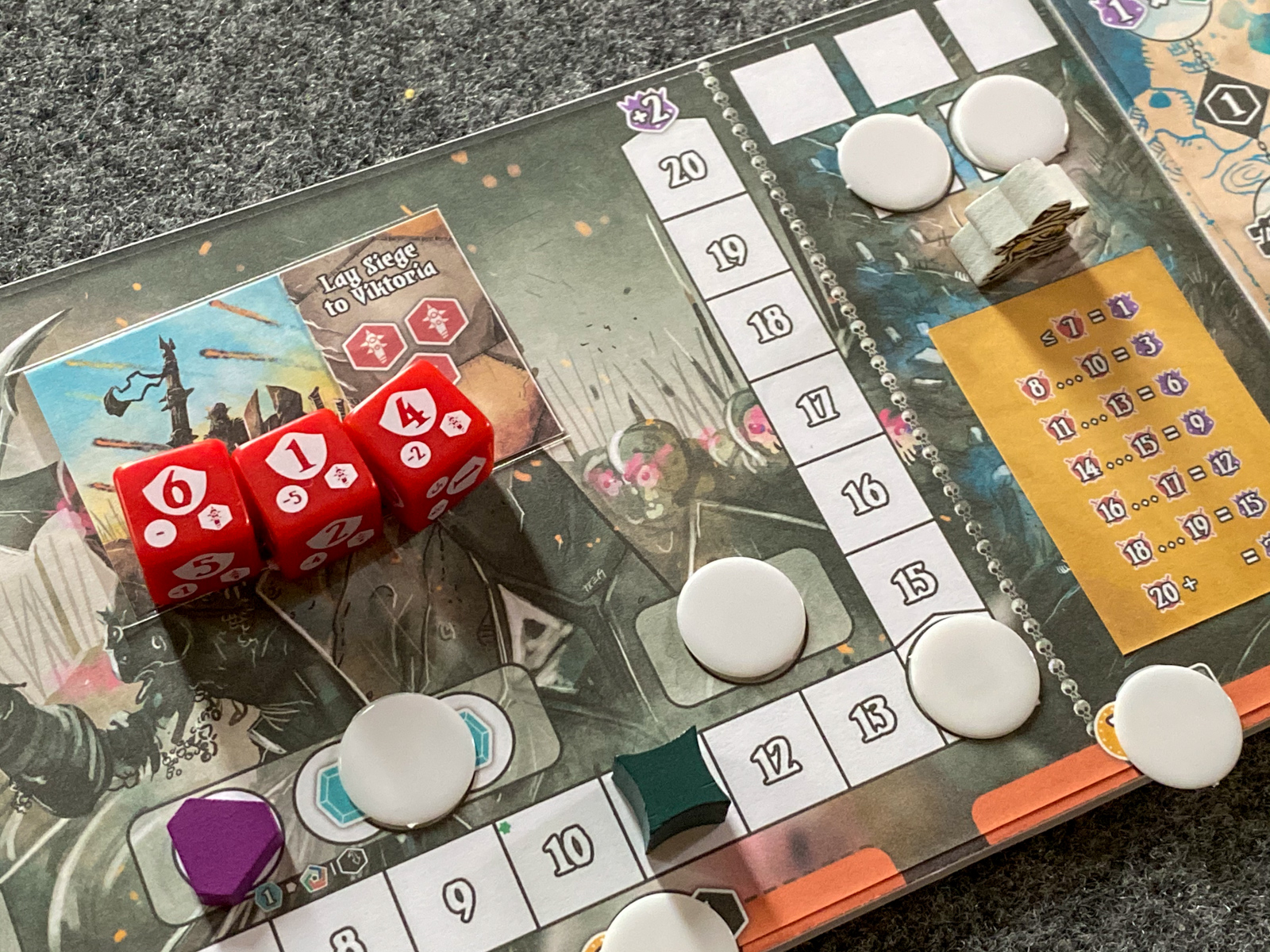 A battle in progress

There is very little interaction between players, however, despite the theme. There are battles, but they are an abstract represented by the name and image on a battle plan card, and the only variable in the outcome is how many victory points you accrue. Instead of fighting each other, players are vying for the title of general. You might end up thwarting an opponent’s plan by grabbing a card or a resource they were after, but there are so many options available to fall back on the impact is minimal. Ultimately it comes down to the final point tally once that seventh skirmish area is filled, and close grouping on the victory track can lead to an exhilarating outcome once end-game bonuses are calculated.

Now, this is a lot to take in, and a lot of things to keep track of. We abandoned our first playthrough about halfway in due to misinterpreting one rule and completely forgetting another. Mind you, I often consider this to be a good sign, especially when a game dramatically improves on the second attempt. When a game feels off balance, or I find myself wondering why a part of it even exists, that’s usually a sign that I have misread the rules. After about two games things started clicking into place, and by the fourth we were settling into our strategies. The mechanic I found to be the most clever was influence, and how it caps the strength of your battle force. The balance of the game really rests on influence, and the more I played the more I focused on boosting that stat however I could. My one major critique is that I’d like some way to trip up my opponents, but honestly I might end up too engrossed in upgrading and building up my war engine for it to make much of a difference. 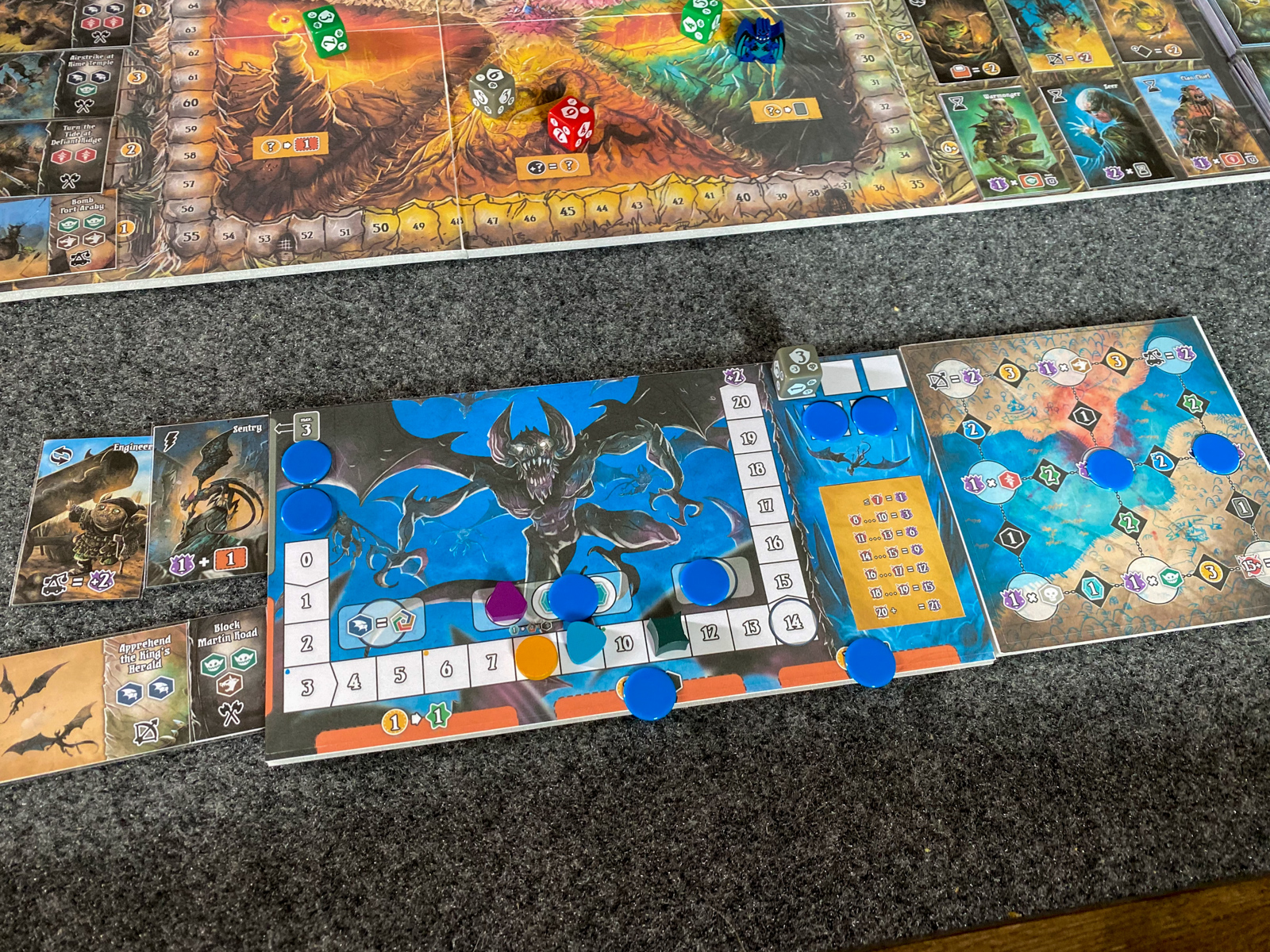 Shadow Kingdoms of Valeria is a solid game that feels a little busy at first but levels out into an enjoyable flow as you get comfortable with it. While the initial complexity due to the number of things you can do can be a bit daunting for a new player, once you figure out the mechanics it’s a pretty straightforward and fun experience. Daily Magic Games is launching the Shadow Kingdoms of Valeria core game with two free Kickstarter-exclusive expansions for only $55 on July 7th, with a $15 print-and-play tier for the budget-conscious. Sign up for a reminder.