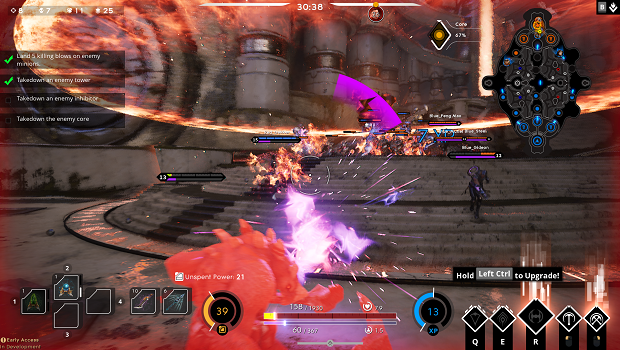 It’s no secret that MOBAs are immensely popular. With heavyweights like League of Legends, Smite, and DOTA 2, the genre has exploded in popularity. In fact, the upcoming DOTA 2 International 2016 has now amassed a record-breaking $18m prize pool. However, as MOBAs are so steeped in fast-paced strategy, customization, and cooperation, the learning curve for newcomers can be rough. Epic Games, makers of action favorites Gears of War and Unreal Tournament, intends to change that.

Recently, I had the opportunity to speak with Steve Superville, creative director for Paragon at Epic Games. He described Paragon as “a new spin on MOBAs where we wanted to put the player into the fight.” While conducting research (or uh, ahem, playing games) for Epic’s new project, Superville and his team found that many of the cinematic trailers for MOBAs “offer a heroic fantasy…and then the gameplay of those exact games was vastly different.” Feeling as though that experience is somewhat of a letdown, the solution, he said, was to inject some of Epic’s legendary action-style gameplay into the genre.

With Paragon, Epic also intends to build something more approachable for fans looking to pick up their first MOBA, but without sacrificing any of the hallmarks that have made the genre so wildly popular. “For Paragon, our goals were basically [to] allow people who play MOBAs and people who have rejected MOBAs, at least up to this point, to find the spot where their skills transfer,” says Superville. So, if you currently are, or have been a MOBA player, you’ll find yourself right at home with Paragon’s mechanics. But equally as important, if you’re an action gamer of some sort with little to no MOBA experience, the movement, aiming, and positioning skills you’ve honed through years of white-knuckling past midnight should transfer easily, allowing you to get acquainted with Paragon quickly.

Not much is yet known about the lore and backstory of Paragon, unfortunately. In fact, Superville said that Epic was very focused on providing a competitive and enjoyable game first, before moving on to developing a plot. The thought was, according to Superville, if you don’t actually like the game, why would you care about the backstory? As the player base enlarges “We’re releasing, kind of, tidbits and creating the world in a kind of way that inspires questions,” says Superville, in hopes of engaging the community as much as possible. Epic is actively encouraging fan theories and fiction on the game’s locales, history, and heroes. “Our goal is to continue to release tidbits of information as we get into open beta, and drive speculation, and have fun with the community and say, ‘work through the puzzle.’”

As for myself, I’ve never been much of a MOBA gamer, and for many of the same reasons that Superville mentioned, coincidentally. Even from the beginning, the overwhelming amount of strategic choice and itemization options that MOBAs can offer is daunting, repeatedly driving me away. My chosen heroes never felt overly impactful or special, instead they often seemed more like a cog in a machine merely performing its function. I couldn’t get over the disappointment of the cinematic introductions pumping up my heroic alter ego, only to have it explosively deflated à la the Hindenburg with the incessant “clickity, clickity, top-down interaction” as Superville so eloquently put it, of more traditional MOBAs. To counter this, Paragon aims to thrust you directly into the maelstrom of battle where actions and their corresponding consequences can be felt in a more real and meaningful way.

Along with bringing you much closer to the fight through its third person perspective, which, I should add, Epic has done wonderfully, Paragon has also streamlined the handful of abilities that each hero can use. With quick taps of Q, E, R or a right click, your chosen hero’s powerful abilities are easy to aim, unleash, and to cancel if the time isn’t right. Upgrades to these same abilities can be done by holding CTRL and then tapping the key that corresponds to each ability. The “deck of cards” strategic customization mechanic that is such a staple of many MOBAs has been simplified and made more accessible with the addition of tips and suggestions, without being tactically gutted. Epic’s intent to create a MOBA that allows your skills to transfer, whether from MOBAs or other genres, is a brilliant idea, and one that has vastly improved my experience and performance.

Now that I’ve spent a decent amount of time with Paragon, I’m starting to appreciate what all the fuss is about with MOBAs. I may not have found my preferred class or role quite yet, but I’m far more comfortable with how matches progress, general tactics, and the like. I’ll admit, the first few hours are still a little intimidating, with nearly everything except the aforementioned movement, aiming, and positioning skills feeling almost completely foreign. But with an immersive and impactful vibe, reminiscent of Unreal Tournament, along with the tactics and choices that hardcore players demand, Paragon feels pretty damn good. If ever there was a MOBA for newcomers, all the way up to grand masters, this is it.