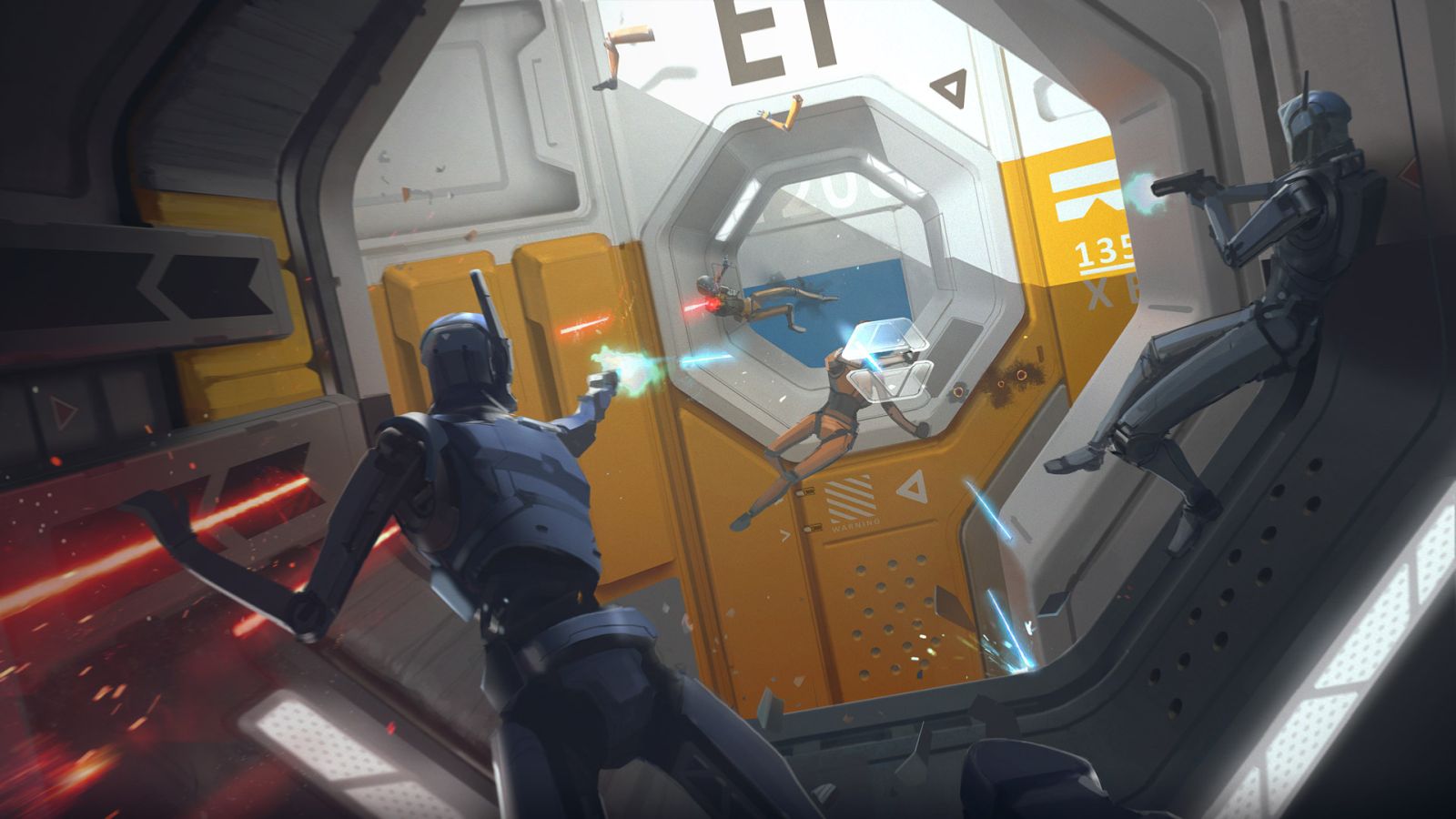 I really wanted to like Lone Echo and its multiplayer mode, Echo Arena, but for whatever reason I simply struggled to hold my lunch with either of that game’s play modes. Perhaps it was the vastness of space, the total freedom of movement, or just how new I was to VR in general, but put simply, my innards were incompatible, leaving me with a splitting headache every time I tried it. With much trepidation I agreed to meet up with the game’s developer, Ready at Dawn, to check out their newest VR iteration — Echo Combat. I came away not only steady on my feet, but blown away at just how much fun I just had. The team has learned a lot about VR in the last year, and it really shows in the preview I got for Echo Combat at E3 2018.\

The concept art is precisely how the weapons look in the game.

Setting up at the Alienware booth (and running on beefy Alienware hardware, naturally) the team dropped us into their virtual reality 5-on-5 battle mode. From the moment I got into the lobby, my head was spinning, not with nausea, but with the amazing battle planning system. Using the Oculus Touch, we jetpacked our way over to a little console to select our weapons, a secondary attack type, and a tertiary support device. In my case I picked a small pistol, though there is a railgun and a shotgun type weapon. The pistol has enough recoil to push you backwards in zero-g, whereas the shotgun has limited range. The railgun takes a while to charge, doing a lot of damage, but it takes a while to recharge. Similarly, there are personal shields, healing systems, remote detonation explosives, shock orbs, a large team shield, and more. It creates a class-like system that should play nicely into team dynamics.

There’s a good variety of gear.

As you are flying around in zero-gravity, movement is a bit of a challenge, at first. You have thrusters on your suit, but the primary method of locomotion is grabbing onto and pushing off of objects and rails and surfaces. It took a few minutes, but once I had the hang of it, I was suddenly moving intuitively. The feeling like I was flailing uncontrollably went away, and suddenly I started looking for strategy.

The teams are split into defenders and attackers. The attackers have to move a comically large swan-like object from one side of the map to the other. In the pre-planning area, you can look at the overall map in a top-down view. As you pull yourself along the table, you can see every hiding spot, angle of attack, movement path, and possible defensive positions. It’s an awesome moment that had me saying wow out loud, much to the amusement of the developers.

The 3D map is a real highlight.

With our attack plan figured out, we set out on our assault. Grabbing onto the rails adjacent to my pod, I forcibly launched myself into the arena. Grabbing onto the jetpack of my team captain, we rocketed towards the objective in a delta formation, breaking off once we got close so we could take up flanking positions. Using the objective as cover, we slowly edged towards the objective. Once the enemy closed position we exchanged fire. I had forgotten to hold onto a rail, so my rapid fire pistol jetted me backwards at high speed. I used my thrusters to get back into position, but without the team assembled, our position broke and we started losing ground. Redoubling our efforts, we pressed forward again and retook the position. This went back and forth for a full five minutes, but it felt like it went by in the blink of an eye. We lost that round, but now it was our time to defend.

Back in the ready room, we revisited the 3D map as our captain gave us some strategic positions to try to defend the objective. The controls becoming downright comfortable, I used the bars like a slingshot, whipping myself into the arena. Using the angles of the map as cover, I was able to duck below the line, popping up to snipe at my enemies. I began snapping up, sniping people in the head, and retreating back below the coverline with relative ease. At least, I was until I found myself jittering and floating, the victim of an electrical grenade that sent me flying prone and vulnerable.

Just as before, we lost the defensive round, but wow did I have a lot of fun. I’m certainly I looked completely insane as I flailed around, grabbing around at railse that don’t exist, but I didn’t care. The short time I had with the game was a huge highlight. Even though Echo Combat is still in development, I experienced zero nausea issues with the game. In fact, once I took off the headset, I couldn’t wait to get back in and back into the arena. The awesome part is that none of us have to wait long. The open beta for Echo Combat starts on June 21st, exclusively for the Oculus Rift. Stay tuned for more post-E3 coverage here on Gaming Trend.