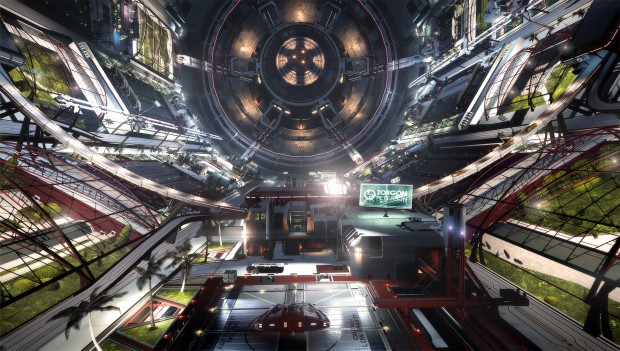 The station was just there.  I could see it through the shattered remains of my cockpit’s canopy, beyond the timer ticking down the seconds I had left to live.

A mere 5 kilometers ahead and full of life-giving air. I’d grown more aggressive than my skills could warrant—tried to take on a bigger faster ship that had mauled me before I’d managed to spool up my faster-than-light jumpdrive and escape.

“You can make it,” I told myself as I rerouted every kilojoule of power to my ship’s engines.

“The station is right fucking there. You can make it.”

That was the first time I died playing Elite: Dangerous, and it was unlike anything I’ve ever experienced.

Elite: Dangerous is the latest entry in a franchise dating back to the mid-80s, all under the helm of one man: David Braben.  Originally developed by Braben and a partner in 1984, Elite essentially created the space trading sim genre out of whole cloth—and revolutionized 3D graphics at the same time. Two sequels were made in the 90s, but the franchise was presumed lost in space genre died out in the early 00s (save for a small number of modest games like the X series).

Then came Kickstarter, and the space sim didn’t seem so dead after all. And so, after a 20 year break, the Elite franchise lives again—and if my time in the beta is any indication the intervening time has been put to damn good use.

What really struck me about Elite: Dangerous was the sheer attention to detail in the cockpit view. Move your joystick—trust me, you need a joystick for this one—and the hand in the cockpit will mimic your motions. Ditto for the throttle.  Roll your ship to the right, and you can watch thrusters engage to turn your ship—if you get close enough, you can watch the maneuvering thrusters firing on other ships. Turn your character’s head and you can watch stars and starships wheeling through the canopy of your ship. I hesitate to resort to a term as crushingly overused as “immersive,” but there really isn’t any other term that encapsulates just how completely you can lose yourself in the cockpit.  And that’s without the use of an Oculus—we’ll come back to that.

The (sigh) immersion is certainly helped by the graphical prowess on display. Nearby stars cast lurid shadows into your cockpit as gasses swirl and flares erupt from their surfaces. Speed too close to a planet’s rings and you’ll get slammed into a world of drifting rocks and interplanetary debris. Bullets ricochet off shields and armor while lasers lance through the blackness in spectacular light shows. I could keep listing the spectacular space-vistas I found in Braben’s virtual galaxy, but you’re better off just staring at the absurdly beautiful screenshots scattered around this article.

Instead, lets talk about money—you won’t have much of it at the start, but there’s no shortage of ways to earn a living.  The aggressive amongst us will probably find their way as bounty hunters or guns-for-hire, capitalizing on the galaxy’s political turbulence to sate their lust for blood and cash.  Feeling a bit more industrious?  Maybe you’ll make your living on the free market hauling goods from one star system to another. Or perhaps you feel the calling of the great unknown, and plan to explore the galaxy, selling the coordinates of the stars and planets you discover on your travels.

I’m not going to claim to have a comprehensive understanding of Elite: Dangerous’s economy, but right out of the gate it’s clear that hauling and combat are the most robust job systems.  Exploration is still in its early stages, but it seems like the market for interstellar coordinates doesn’t generate quite the same cash flow as hauling 30 tons of medicine from station to station.

Of course, that all comes with the obligatory mention that this is only a beta.  And unlike some other games, this one clearly is a beta—loads of features have yet to be implemented in the current build (2.05), and my PC had a nasty habit of crashing during travel animations.  Still, it’s been fairly impressive to watch Frontier Development push out bug fix after bug fix as the beta progressed, while still delivering major new features and updates to the game world.

If I had to make one complaint about Elite: Dangerous, it would have to be the time required to get from place to place.  Travel between different star systems is fast enough—point your ship in the right direction, engage the hyperspace drive, and you’re blasting across the galaxy.  The issue is interplanetary travel—that is, travel between bodies that are too close to use the hyperdrive.  The distances you’ll have to travel are very far, often measured in hundreds of thousands of miles. Unfortunately, even after engaging the high-speed “supercruise” mode on your ship, travel between planetary bodies can take several minutes.  That in itself wouldn’t be a huge problem if it weren’t so darn boring.  You’ll spend quite a bit of time in supercruise, so it’s a real shame that it isn’t more engaging. I often had an X-Files episode playing on Netflix to give me something to hold my interest while speeding around the solar system.

Elite clearly has a lot of promise, despite its early hiccups with travel time, but one device can take that promise and make it into a brilliant, glorious reality: the Oculus RIft.  I got to play an early build of Elite at GDC earlier this year, and even on the low-res, grainy screens of the Rift DK1, Elite: Dangerous is a revelatory experience.  No more do you have to rely on the tiny radar screen to track your enemies if they fly out of view; you simply look up.  It won’t be for everybody—I can easily see some of my friends having major issues with motion sickness—but if you already have an Oculus, Elite’s beautifully detailed rendition of the Milky Way will be unlike anything you’ve seen before.

The more I’ve played Elite: Dangerous, the more excited I’ve become about the eventual final release.  I’ve already started setting aside some money for a quality joystick/throttle and deeply considered adding my name to the waiting list for the latest version of the Oculus. Is the beta worth the entry fee for somebody less interested in the genre?  Probably not, especially if you don’t have a joystick or an Oculus.  But if you’ve got the hardware (and the stomach),  Braben’s latest creation is like food for a starving man.