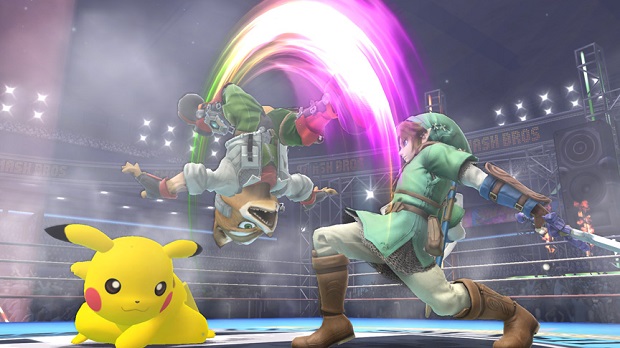 Nintendo’s booth at E3 this year was largely dominated by Super Smash Bros. for Wii U and 3DS. If I was passing by the booth and saw that there was about to be a spot open, I would take a few minutes to stop by and play for a bit, (although I was also hoping to win one of the shirts they were handing out to whoever won the second of two matches players were allowed per session.)

The magnitude of the cross-over fighting game’s presence at E3 showed just how much Nintendo is banking on Smash Bros’ success to help save the Wii U, as the system’s poor sales have been hurting the company financially. Still, funnily enough, what I played of Super Smash Bros. didn’t feel like it was trying to give me a reason to believe in the Wii U as a platform. I say this because the demo of Nintendo’s biggest game of the year was playable with a GameCube controller as opposed to with a Wii U Gamepad and Wii Remotes. It’s certainly more practical, and Smash Bros. will probably have minimal Gamepad use outside of the Amiibo figure functionality teased at Nintendo’s E3 digital event, but when the most important game of the system’s struggling lifetime isn’t utilizing what makes the system unique, it kind of brings attention to the fact that the Wii U probably doesn’t need a giant touch pad to begin with.

However, Super Smash Bros. Brawl for Wii didn’t take advantage of the Wii remote either, but the Wii wasn’t in a position where people were questioning the usefulness of the controller, as it had been used (whether you consider it to have been effective or not) before.

Getting past my gripes with the Wii U, Smash Bros. was one of the games I was most excited to get my hands on at E3, and I got plenty of time to go head to head with the new additions to the game’s already huge roster. Most of the new characters were playable, but Pac-Man, Platunia and the Mii fighters were all noticeably absent. In my quest to win matches and earn a shirt, I spent most time playing as Pikachu, who has been my primary character since the first game. But after multiple fights I saw plenty of people winning with new characters like Pokemon’s Greninja and Punch-Out’s Little Mac, showing that the game is still as easy to instinctively learn after just picking up a controller. This also speaks to the game’s balancing, as new characters being used by inexperienced players were able to beat veterans after only getting one practice round in before the real competition started.

Ultimately, Smash Bros. feels right at home on the big screen. Finally making the jump to HD visuals on the Wii U, Smash Bros. looks beautiful and crisp. Which is nice, because going back to playing Brawl on my flat screen is not a particularly pretty sight.

A couple dozen feet of walking distance away from the Super Smash Bros. Wii U set up were demos of the 3DS version of Smash Bros., both showcasing standard matches as well as the 3DS exclusive mode titled Smash Run.
My first battle on the 3DS version left me feeling uneasy. While I figured out where the moves I associated with three other controller layouts landed on the 3DS, I noticed a severe amount of slowdown and lag. This was pretty disappointing considering everything else on the handheld version absolutely held up to the standards of each preceding console version. It looked great, and playing it with a 3DS button layout only took a brief moment of adjustment to get used to.

I left the demo feeling pretty bummed that the version of Smash Bros. I’d get to play first wasn’t going to run like I needed it to. But I went back the next day to give it another shot. I played multiple matches over the course of the next two days of E3 and never once suffered the issue again. By the time I was done playing my mind was at ease. Hopefully this means that my first experience with the 3DS version was just a fluke and I’ll never have to worry about playing a sub-par Smash Bros. game on any system.

After getting a few rounds in I tried out the Smash Run mode that’s exclusive to 3DS. Anyone who remembers the Adventure Mode in Super Smash Bros. Melee will be able to jump into this mode rather quickly. You and three others pick your four characters like any other fight, but before the actual battle begins, all four players will navigate through a map of Nintendo mash-ups, defeating enemies and raising your character’s individual stats. After a set amount of time, the fight proper begins and players must make due with whatever buffs and debuffs they managed to acquire.

It was certainly a fun mode, one that might be played in between every few standard matches to break up the potential monotony, but given the skill skewing nature of it, it’s unlikely that it will ever make its way to the foreground of Smash Bros. competitive play.

While Super Smash Bros. for Wii U and 3DS is still a decent ways off, getting my hands on both versions left me confident that while the console version will be the one with lasting power, the handheld version will be a worthy version to play until it arrives, and perhaps after should I ever find myself in the mood to play a round with only my 3DS on me.

Super Smash Bros. for 3DS is slated for release on October 3rd and the Wii U version will be released soon after.