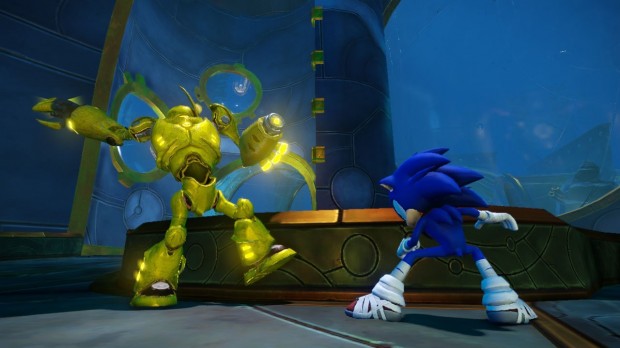 I got some hands-on time with both the Wii U and 3DS versions of Sonic Boom, the games that will be released as part of Sega’s new Sonic initiative at E3. Sonic Boom is comprised of the two games I got to play, as well as a TV show and toy line. When I walked away from both demos, I couldn’t help but wonder if the TV show and toys were what Sega was prioritizing when approaching Sonic Boom.

The most jarring aspect of the Wii U version, Sonic Boom: Rise of Lyric, was its lack of emphasis on the speed the series is supposed to be known for. In one of the levels I played, Sonic looked over to his friend Knuckles and teased him about being able to keep up, but I felt no noticeable difference in speed when playing as either of them. The level I played wasn’t designed with the loops and dash panels that capitalize on the series’ momentum. Instead, this level of Sonic Boom felt like a beat-em-up sprinkled with puzzle solving.

It appears that the game is divided with different types of levels, and there are ones that are much more in line with what players expect and want in Sonic, but the inclusion of more slow-paced levels is puzzling and feels indicative of the Sonic series’ on-going identity crisis.

Characters only differentiate themselves with a few different abilities that require you to switch between them in order to progress. But other than that, it’s really unclear just what reasoning a player has to ever switch between them as none of them appeared to have anything over another. Sonic doesn’t feel any faster than his friends despite that being his trademark and Knuckles didn’t appear to do any more damage with his giant set of biceps than Sonic did with his chicken legs.

The 3DS version, Shattered Crystal, fares a little better, but not much. It looks like a classic Sonic game but playing through a few levels revealed that it was simply masquerading as a Sonic side-scroller. It still suffers from the same lack of movement that the Wii U version does.

The side-scroller was more focused on the swapping between characters, as character specific obstacles were much more prevalent in the game’s level design. Sonic’s longest-running sidekick Tails was used to ascend by hovering over fans, while Knuckles could dig underground to find hidden areas.

The Shattered Crystal demo did give me the opportunity to briefly play as newcomer Sticks, but because the game requires you to switch between characters more frequently than the Wii U version did, I didn’t really get a good grasp of who she was or what her purpose was outside of her using a boomerang as a long range weapon.

Ultimately, what I played of both games just felt incredibly stilted. Frankly, it felt very much like a licensed title coinciding with something much bigger. Perhaps Sonic Boom the television show and the toy line are what Sega is really expecting to profit on here.

I’m interested to try the full game out so I can see how the other level types play out and see how these slow-paced levels fit into the grander picture. I’ve had some great and not so great memories with the Sonic franchise but hopefully Sonic Boom doesn’t turn out to fall into the latter category.

Sonic Boom: Rise of Lyric and Sonic Boom: Shattered Crystal are both slated for release for Wii U and 3DS respectively this November.