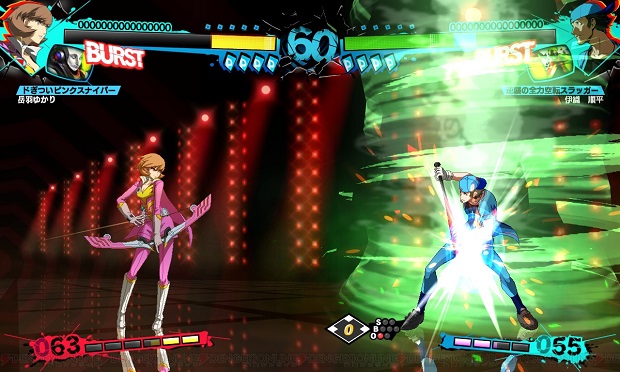 E3 2014: Persona 4 Arena Ultimax is the Perfection of Excellence

At pretty much any point I had a moment of free time during this year’s E3 I would find myself wandering over to Atlus’ booth to play a match of Persona 4 Arena Ultimax. As such, I actually got to play quite a few matches and saw a lot of what Arc System Works has brought to the sequel to 2012’s Persona fighting game Persona 4 Arena.

The game apparently takes place a mere day after the ambiguous cliffhanger of Arena, and not only has the Midnight Channel returned, but the fog that is seen as a link between the TV world and the real world has once again overtaken the small town of Inaba.

These events have brought the previously absent members of the Shadow Operatives to the town in order to assist the cast of Persona 4 proper and the characters of Persona 3 that appeared in Arena.

Playing as the new additions to the game’s roster took up most of my time. Yukari Takeba uses her bow to fight effectively at a range but has enough options when up close to not be relegated to strictly a keep-away character.

The spear-touting Ken Amada, accompanied by his canine companion Koromaru fight as a pair. The player primarily controls Ken, but they both have combined attacks and make for a good mid-ranged team.

Junpei Iori is quick and combo centric when up close, but in my time with him I found him to be somewhat limited when fighting enemies at a range. Oddly enough, Junpei’s fighting style has become centered around baseball, which I don’t recall him having much of an interest in when playing Persona 3. Junpei has a unique mechanic that gives him a fluctuating power level in a match. Landing successful hits with Junpei’s bat adds to a baseball “scorecard” that increases his power as the match goes on. I’m really interested to get extended time with Junpei so I can master this mechanic, as he was definitely the character I enjoyed playing as most.

Making her first appearance as a playable character is Persona 4’s Rise Kujikawa. Her inexperience with actually participating in battle comes through in her attacks, such as her combo finisher consisting of a fury of slaps, but the overall theme of her fighting style is centered around her “Idol” status. She uses a microphone as a weapon and a lot of her attacks involve music and her girlish charm. Overall, Rise was probably the weakest character I played as. With low health and low-damaging attacks, just what type of role Rise plays in the game’s roster wasn’t entirely clear to me.

Rounding out the roster is series newcomer Sho Minazuki. Sho comes with two forms, one with and one without a Persona. In both variations Sho is an aggressive character with rushing capabilities, but when using a Persona he gains many other options that help balance him out with ranged moves.

But while I made a point to try out all of the new characters, I got a chance to check out what’s new for the returning fighters. Each character has received new moves in Ultimax as well as a Shadow version to choose from.

Shadow versions of characters suffer from a lack of a “Burst” ability and reduced attack damage, but have the advantage of a “Shadow Burst” ability that lets them use infinite amounts of SP for a short time, allowing them to unleash a multitude of special attacks upon their opponent. Shadows are ultimately a risk to use when compared to their seemingly more powerful standard versions, but if a skilled player leverages their differences properly Shadow characters definitely have their uses.

Ultimax is looking like it could be the perfection of an already spectacularly built fighting game. If the Shadow variants are balanced and actually useable despite their inherent short-comings, it could flip the entire game on its head. I can’t wait to get my hands on the final product when it comes out on PlayStation 3 and Xbox 360 on September 30th.