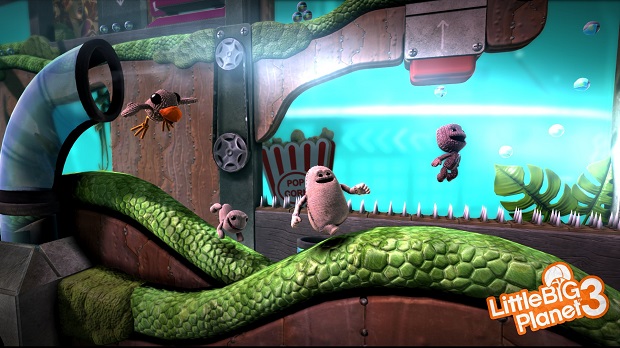 Typically, I’m not a fan of multiplayer.

With the exception of fighting games I tend to try and keep my social contact with the rest of the world to things outside of games. I’d much rather be laid back and playing the latest and greatest release in complete solitude instead of with a friend on the couch next to me. So when a game comes around with multiplayer really impresses me, that’s no small feat.

The LittleBigPlanet series has appealed to me less due to its platforming gameplay than its charm, sense of humor and for its allowing me to dress up its characters in costumes of many of my favorite gaming icons, but when I got some hands on time with the series’ PlayStation 4 debut, LittleBigPlanet 3, I was completely caught off guard by how much I loved the game’s emphasis on four player local cooperative play.

Sumo Digital’s taken the reins on Media Molecule’s platformer for the next installment, and they’ve brought Sackboy a group of new friends that all operate markedly differently from the game’s mascot.

Sackboy himself has a few new tricks up his sleeve, now with a blow dryer that allows him to blow away obstacles in order to progress, and he now has the ability to climb in order to traverse the environment in a different way. But the three new members of LittleBigPlanet 3’s cast as well as level design tailored around their presence emphasizes teamwork in a way that the series never captured before.

The first addition, Oddsock, is a quadrupedal character that can run much faster than Sackboy, and wall jump in order to get around much more quickly than any other character in the cast.

Toggle, the character that I got to use when playing, is the heaviest of Sackboy’s new companions, and the strongest. He uses his weight and brute force to help the team get past some obstacles. However, true to his name, Toggle has the ability to switch from the biggest and most powerful of the group to the smallest at the press of a button. Toggle can transform to a smaller version of himself in order to squeeze through tiny spaces no one else can.

Lastly, Swoop is a bird like character that can fly and pick up other party members. This is especially helpful if another player falls off an area of a level and can’t make it back up quickly. Swoop can just go pick them up and fly them to where they need to be.

With each player having a very different set of skills, levels appear to be designed to make use of each of them so every player will constantly have a role to play and a responsibility to take care of as levels go on.

I loved how important cooperation was in the demo we played and that it didn’t just feel like Sumo Digital had added four player co-op just for the sake of having multiplayer. It looks like the studio is actually taking care to ensure that players are involved and not just tagging along for the ride.

We’ll see if the entirety of LittleBigPlanet 3 follows this design when it comes out for PlayStation 4 later this year.