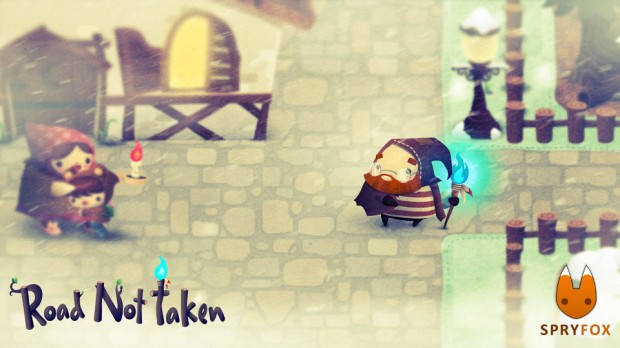 Road Not Taken is an adventure based around the famous Robert Frost poem of the same name. From the outsider’s perspective, it seems like a simple puzzle game with relationship building elements, but at its core Road Not Taken is an emotional adventure that hopes to break your heart just as much as it rewards you. You follow a hooded character as he enters into a new city which happens to hold varied personalities, which is one of the major hooks in the game. Before launching into the puzzle-infused heart, you relax in this aforementioned city and build relationships with the characters around you. In traditional dating sim fashion, you can start a relationship with certain characters, purchase your own home, move in together, etc.

That is, until your character dies and the rogue-like nature of Road Not Taken rears its head. Once you perish, you restart fully anew, with new characters populating the whole city. This will open up the possibility of finding multiple NPC’s to interact with. After some time with the game, these characters definitely seem possess some touches of personality, with some being very pushy, some being overtly nice, and others who seem to have their own hidden story. With that being said, whether those characters’ personalities will differ enough when you start anew is still unknown.

Not every character vanishes alongside you upon death as the mayor of your small town persists through every playthrough. The main story crux holding this together is that he simply uses you as a worker and are expendable in his mind. The work you are doing boils down to making sure the citizens are happy, among other tasks that will somehow net the mayor a large bankroll. These will all be achieved through embarking on missions that require you to go from screen to screen and complete, you guessed it, puzzles.

The puzzles in Road Not Taken rely heavily on a concept that many of us take for granted in video games: picking things up. Moreover, it makes sure you do not take it for granted in Road Not Taken by giving you a numbered energy meter which depletes every step you take while carrying something. The point of all this lugging around is that whatever you are carrying is used to open the next area, which can contain the item needed to complete the objective at hand. Thankfully, the energy meter is not too demanding early on as it gives you around 80 steps, which seems to be more than enough. On the other hand, it is very apparent that the complexity of the puzzles could increase tremendously as the game continues.

While going through these puzzles, you will occasionally run into enemies. In the playable demo, the only enemy spotted was a bee that was dispersed by throwing it directly at a wall. Another intriguing system to be found in what looked like a standard puzzler is a crafting system. Unfortunately, the full extent of the crafting system was not apparent in the demo but it is most definitely there and achieved the same way puzzles are completed. You craft things by picking them up and chucking them into a line which will then disappear and form the item you need. Also, a crafting menu is accessible that shows you what items are constructible and how they are made.