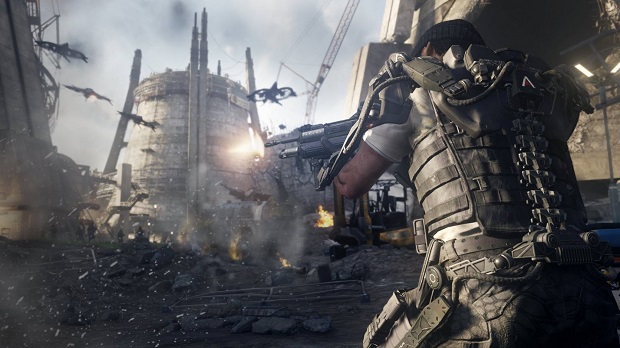 E3 2014: Call of Duty: Advanced Warfare Pushes the Series Forward, but Borrows A Lot to Do It

When I was treated to a lengthy demonstration of Call of Duty: Advanced Warfare, it became very apparent to me that this game is trying to shake off a stigma that’s plagued Activision’s wildly successful series for the majority of its lifetime.

Despite being one of the most profitable franchises in the industry, Call of Duty is widely disparaged by a lot of the hardcore gaming community as an annual rehash with little substance.

With Advanced Warfare it’s clear that developer Sledgehammer wants to carve out a new outlook on the long-running series. In fact, they said as such. A representative from the team described Advanced Warfare as a “new era” for the industry’s biggest annual release, and truthfully, I left the presentation believing them. But seeing the direction that the studio is taking the series has me wondering if it might be creating a new issue entirely, as the new additions to Advanced Warfare lead me to believe Call of Duty may be on the verge of a severe identity crisis.

What I was shown of Advanced Warfare alongside a group of other journalists was incredibly impressive, and it was obvious that Sledgehammer knew it because the segment opened with a character breaking the fourth wall and listing the game’s impressive technological achievements and declaring the following presentation would blow our minds. As the demo went on I was consistently grinning at the visual fidelity and the action-filled set pieces, although it was very jarring to see the standard Call of Duty “follow the soldier and shoot” level design still present under the game’s shiny coat of next-generation paint.

Advanced Warfare is set in 2054, thus the game’s futuristic setting comes with a futuristic arsenal. But with that setting also came some clear parallels to other recent shooters. Seeing the vast cityscape reminded me of the sequences in Vekta City in Killzone: Shadow Fall, and this feeling like I was looking into another game was only amplified by seeing the player in firefights with jet packs against drones and giant mechs like in Titanfall.

Advanced Warfare has the most verticality in the series. While not comparable to shooters that emphasize it more heavily like the previously mentioned Titanfall, Call of Duty’s latest outing does allow players to traverse the environment in ways unlike any game in the series before through use of the game’s jetpacks and parkour elements. The game has a good sense of movement and while it’s not quite on the same level of momentum as other recent shooters, it was still a nice shake-up from the point, shoot and run formula.

In another level we were shown, the player was in a more covert stealth-based level in which they were meeting up with members of their squad on the opposite end of a map while also having to utilize cloaking devices to quietly get around hordes of enemies. The entire sequence was completely uncharacteristic of Call of Duty as we know it, with almost no gun play going down throughout the entire segment.

With the inclusion of this kind of stuff, Advanced Warfare looks markedly different than any game in the series before, and it looks like it could be the deepest game in the series. But it runs the risk of not carving out its own place in the flooded first person shooter market and instead emulating others that have.

Sledgehammer is making steps to bring new life into the Call of Duty franchise, but it’s worrisome that it does appear to also be making the series come off as more derivative than ever. Advanced Warfare is straddling the line between complete reinvention and thinly-veiled plagiarism.

From what I saw, I can confidently say that Advanced Warfare will be good, and will likely have something for some players who never found appealing about the series in any prior installment. But whether or not Sledgehammer will be able to give Advanced Warfare the ability to stand out when pitted against shooters outside of the Call of Duty itself remains to be seen.

Call of Duty: Advanced Warfare is slated for release on November 4th.