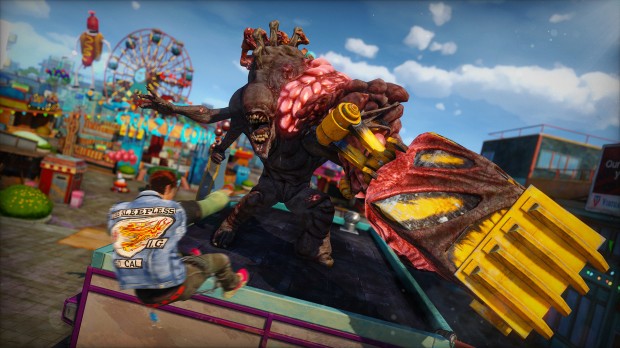 Sunset Overdrive is set in a world ravaged by the apocalypse. Most of the population has been wiped out and there are only a few select humans still managing to survive. No matter where you go, your main character is consistently pursued by hungry monsters that want you dead. Despite all of this, the creators behind the Resistance and Ratchet & Clank franchises, Insomniac Games, continued to chant that their new product hoists a “beautiful apocalypse.” They also provide one of the more interesting ideas regarding the mindset of the player, stating that the apocalypse is not the end, but instead a new beginning.

It is a very unique concept, finding positives in society breaking down and realizing that this happening actually gives opportunity to certain parts of the world. The deterioration of the Sunset Overdrive world does not come from a virus outbreak or aliens, but instead one company’s screw up. The company being FizzCo, one of the most popular energy drink providers around in the Sunset Overdrive world. To celebrate the launch of their brand new energy drink, Overcharge Delirium XT, the company and many others gather for a party at the CEO’s home. Unfortunately for FizzCo and the rest of the world, Overcharge has a deathly chemical in it that turns whoever drinks it into a horrible monster that craves nothing but more Overcharge.

Insert you, the main character. You have a horrible temp job cleaning up after all the bigwigs dining at the party, and just as you are throwing the trash away, an Overcharge hungry monster bursts through a door and begins charging right for you. You do what any other sane human would do and viciously murder it. From there, the game begins and you embrace your shot at the previously mentioned “new beginning.”

As you would expect, your main character is an important part of the Sunset Overdrive world. Insomniac is putting a large emphasis on the customizability of him, touting that you can make him any race or sex you want. On top of that, your main character transitions seamlessly into the multiplayer, bringing over every skill and item found in the main game. The multiplayer is highlighted by an eight player co-op segment entitled “Chaos Mode.” Chaos Mode sees you and seven others go through varied missions which can be either easy or hard. If you select hard, the reward is going to be larger. Every Chaos Mode run ends with a defense against incoming attackers, horde mode style.

As for the actual single player, this is where the game seems to shine the brightest, thanks in part to its gorgeous visual style. As mentioned earlier, Insomniac is attempting to make their atmosphere as light as possible, which is shown clearly by their heavily stylized art. On top of that, there are dozens of respawn animations that will break the fourth wall in hopes of providing a few chuckles. Boasting bright colors and fantastic enemy design, Sunset Overdrive popped off the screen better than any other game found at the E3 convention this year. The variety in the environments and consistent visual stimulation are just a few of the many reasons Sunset Overdrive will undoubtedly wow art lovers come its launch.

In typical Insomniac fashion, Sunset Overdrive will have a whole host of random weapons. Two of which shown at E3 were an automatic gun that shot out vinyl records and a grenade launcher variant that hurled propane tanks at the enemy. Performance in combat will be measured by more than just the weapon type you select but also by how much you glide around the environment. While not critical to staying alive, gliding on rails and doing other unique actions will boost your style meter. This style meter is based around the installing of “amps.”

You accumulate these amps by picking up supplies and crafting them, with dozens of amps possibly being at your disposal. Amps act as a form of a skill tree, where you can choose certain amps to help you in combat. Then as your style meter increases in level, from one to four, you can take advantage of those amps. But if you are a simpleton that only likes to run around and play the game like a Gears of War knock off (minus cover), then your style meter will stay low and many amps will be inaccessible.

It is very clear that Insomniac is having a blast developing Sunset Overdrive, but will their excitement translate into gameplay? After all, this is still going to be an open-world game, a genre that is known for becoming a tad tedious. To avoid that, Insomniac has promised that there will be “at least one unique mechanic introduced in each mission.” While predicting the final product of Sunset Overdrive is impossible, Insomniac’s constant approach of making it embrace being a video game is respectable. That being said, respectable is not the right word to describe Sunset Overdrive.

Beautiful, promising, delightful, and exciting are all much better descriptors.

Sunset Overdrive will be hitting store shelves on October 28th, 2014.