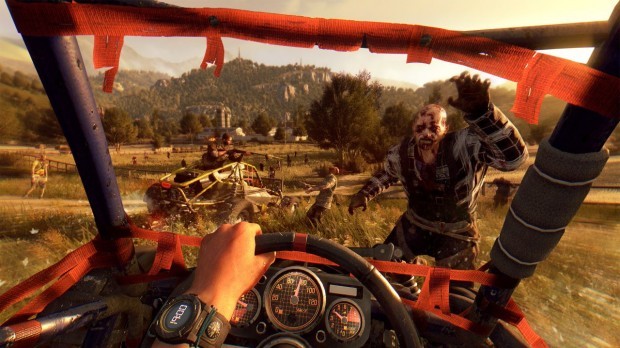 Dying Light was one of the biggest surprises of 2015, and Gaming Trend praised it for its excellent parkour and melee combat mechanics in our review. With Dying Light’s first major expansion coming out in February called “The Following,” we sat down with Lead Game Designer and zombie enthusiast Maciej Binkowski to learn more.

Travis Northup: Dying Light was kind of a sleeper hit. It was one of those things where I didn’t really see it coming, and I picked it up just because it came out in that sweet period where there was nothing else to get.

TN: Yeah. (laughs) Right? So, for people who maybe missed it, what is Dying Light?

MB: Dying Light is an open-world, first-person zombie game. It features, dare I say, unprecedented freedom of movement. If there’s enough room for your hands, you can grab it. You can go anywhere, and do so however you want. It also has dynamic day and night cycles, and the gameplay actually changes from day to night.

During the night, new creatures show up, and all hell breaks loose. It’s focused primarily on melee combat – we love to get close and personal with our enemies. We actually spent a lot of time making sure that you can feel every single hit, so that it’s very visceral. There are guns as well! They’re very powerful, yes, but they’re also very loud. So that means, if you want to shoot, you’ve got to constantly stay on the move because that’s going to attract even more zombies. And now we’re introducing an expansion called “The Following,” which brings a new map, a new story, new weapons, new enemies, new mechanics, and customizable buggies.

TN: How does “The Following” fit into the larger story of Dying Light? Is it a direct continuation of the story, or is it a separate story?

MB: It’s a branching story. The story of Rais and GRE is done at this point, and this is it’s own branching plot thread, I guess would be a good way to put it.

So the basic premise is that we get information about a group of people who are supposedly  immune to the virus. Now, it’s just a rumor, but it contains a valuable promise that we want to check out. Now you head to this new map that we called Countryside, which, in terms of size, is actually bigger than The Slums and Old Town combined.

TN: Does the protagonist from Dying Light make a return?

MB: Yeah, you still play as Kyle Crane.  You actually get to take your character from the main story. Whatever experience you’ve gained, whatever weapons you’ve unlocked, you get to take all of that into “The Following.”

TN: What is the main selling point of “The Following,” besides more Dying Light? What’s the biggest improvement, change, et cetera?

MB: So, one thing is the map itself. It’s a completely new setting, and we actually go outside of the quarantine for the very first time. It’s a new team, with new challenges, and of course, there’s the customizable buggies. The area is so vast, and it takes a long time to travel by foot. It’s actually pretty dangerous. So we introduced buggies. They’re fully customizable, so you get to change how they look, but the best part about it is that you actually get to upgrade your vehicle. You find parts and you make it more badass; Faster, stronger, better handling, and so on. And then on top of that, you also have a special skill tree that allows you to unlock special upgrades for your buggy, like a battering ram, or an electric cage.

Now, to do that, you need to get Driver XP points. So, it’s very similar to the systems that we had in the base games, like agility points, and fighter points. But now we’re introducing driver points. When you get into the buggy, when you drive, when you ram enemies, when you destroy parts of the environment, when you jump off ramps, you accumulate driver points. And when you get enough, you get a driver level up, and then you can spend those points to get a new skill.

You also unlock a special [ability] to let you find parts in the loot you get to build new parts onto your buggy. It doesn’t stop there, though, because you actually need to manage your car, which means you need to find fuel. It’s not infinite. Also, every time you hit something, parts of your vehicle wear off. So eventually, you either have to swap them for new parts, or repair them.

MB: Yes. [laughs] So we had electric traps that you could run through, and they would electrify anyone behind you. This is the mobile version of it, and there are a few cool things about it. One is that you can just drive your car, launch it, and it electrifies everything that’s around it. But you can also use it remotely, so it’s like your own electricity trap that you can take with you.

TN: Will vehicles affect the quarantine zone? Are there going to be vehicles there, or is that zone staying the same?

MB: No, all of the action of “The Following” happens in the Countryside. You can go back to the quarantine, however, but you won’t be able to take vehicles with you. You can, however, take whatever you picked up in “The Following,” so if you got any experience or weapons, you can take that back to the base game.

TN: Are vehicles loud like guns? Will that draw zombies?

MB: If by operate, you mean “Can they jump you while you’re driving and smack the shit out of you?” Then yeah, they can operate vehicles.

TN: (Laughs) Yikes. What are you personally most excited for in “The Following?”

MB: Oh, definitely it’s the buggy. We just like smashing shit with a car. And now it’s not simply a car. You can actually make it even more badass. It just feels good, you know? And it fits perfectly in an open-world game, especially with such a vast area. So…Yeah, that’s my favorite thing about it.

TN: With vehicles being added, I remember in the core game, the thing that I was most fond of was the parkour. So, if this is an open area with cars, is parkour less of a focus?

MB: Kind of like what you said, yeah. The focus is on driving now. But, since parkour is really a pillar of our game, you can be sure that it’s still there. There are locations that are very parkour-heavy, it’s just that the distance between them is pretty big. So you can be sure that there’s parkour there, but if you’d like to just run through the Countryside to your objectives, you’ll probably die. (Laughs) It’s doable! But it’s going to take a long while, and you’re going to die.

TN: Will you encounter other people with vehicles? Or are you basically the only person with a car in town?

MB: Well, the way the world is structured is that people live in close environments. They don’t really travel outside.

TN: Okay. So there’s not going to be jousting matches against other players?

TN: I remember one of the main things that drew me into Dying Light that a lot of other zombie survival games don’t have, is that it was first-person throughout everything. Is it first person when you’re in the buggy?

TN: We’re here at PSX, and there’s been a lot of games talking about becoming compatible with VR. You have a zombie game that is first-person. I’m wondering, is there some possibility for PlayStation VR compatibility?

MB: I don’t want to say no, but it’s not something that we’re working on right now. We have a team that does a lot of experiments with the VR technology, so who knows?

TN: We also got a release date today, February 9th. Can expect any more DLC from Dying Light beyond “The Following?”

MB: That’s a very good question! Right now we have all hands on deck for this one. While we have some time before the release, we’re focusing on polishing and improving “The Following” as much as possible. As for what happens next, who knows? We have some ideas, but it’s still early to say.

TN: In your opinion, what is the best way to survive the zombie apocalypse? If it breaks out right now, what is your first move?

MB: I would run. (Laughs) You know, I like to think of myself as if I’m a badass that would kill anything that comes at me, but when I really think about it, I would just run.

TN: Where would you run to?

MB: Somewhere high. There’s a lot of high buildings around here. I’d probably barricade myself in some top floor.

TN: Learn some parkour to get from building to building? (Laughs)

MB: That would be useful! Access to water and electricity would go pretty soon, and this place would get looted, so I’d probably have to grab stuff as I go and barricade myself up high. I would have a great view of the area, and could see if anything was coming. But looking around at the people here, and there’s a ton of people here, can you imagine them all turning into zombies? Perhaps it would be better to actually go away from the city. Like what the guys in “The Walking Dead” did.

TN: My solution: I would paddle out. Get a boat. Go out in the ocean. Zombies can’t swim, usually, so that would be my strategy.

MB: That’s a good idea. And there’s a lot of water nearby! You’ve got the coast right there. Unless there’s Navy out there, shooting anyone who comes by.