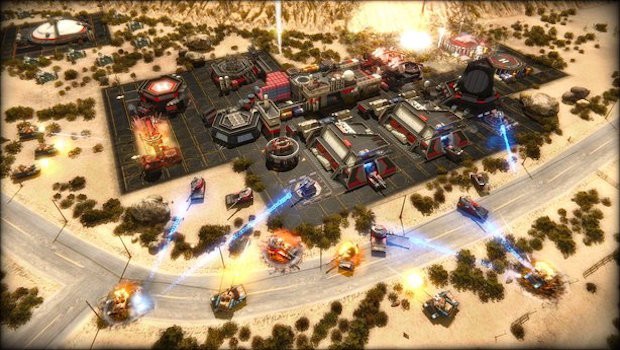 Strategy games are still a thing. I played Act of Aggression which is a mostly by-the-books real-time strategy game that harkens back to the days of Westwood’s Command & Conquer and Blizzard’s Starcraft. It has nothing to do with defending a tower or a lane, but it has everything to do with planning your base out and expanding in a way that gains you resources and territory.

In my limited time playing the game, I established a base advanced enough to produce basic infantry, including soldiers equipped with automatic weaponry, RPGs, and mortars. Eventually I was even able to build light transport vehicles and tanks. AoA relies on you strategically taking buildings in order to establish dominance throughout the map.

The graphics are detailed but not quite the generational leap we’ve experienced in other games, like The Witcher or Killzone Shadow Fall, but it’s quite serviceable. The infantry units are a bit too small, the vehicles are just about right, and the buildings are huge. The special effects are good, judging from the explosions I saw. But overall I didn’t see anything mind-blowing.

I guess what I’m trying to say (again, based on just a glimpse of the game) is that Act of Aggression looks like a decent addition to the RTS cadre. I didn’t witness anything new or innovative within the genre, but we can likely look forward to some solid strategy gameplay.