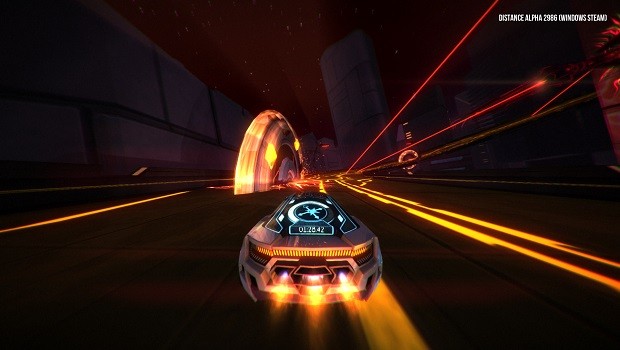 I’ve never been a huge fan of racing games that take place in realistic environments, such as modern cities or real-world race tracks. I guess I’m not enough of a car or driving enthusiast to find the fun in doing it in video game form (I do love driving in real life!) However, if you give me a futuristic, sci-fi setting with vehicles that go above and beyond burning rubber, then you’ve got my attention. Such is the case in Distance, a game that looks like a standard racer on the surface, but plays more like Mario Kart than Need for Speed or Forza.

Distance also boasts an art style that you would be hard-pressed not to compare to Tron, so as you speed through each of the tracks you’ll be bathed in neon lighting and neo-industrial architecture. Strategically placed obstacles on each track ensure that you’ll make use of your vehicle’s special abilities, including boosting, jumping, and flying. The boost is limited, of course, but it recharges over time, so you’ll have to be smart about when to use it. Jumping will test your timing skills, as jumping too soon or too late could lead you hood first into obstacles, instantly destroying the car. You respawn almost instantly but it still takes a bite out of your finish time.

At various points within a track you’ll suddenly notice there’s no more road and this is where flying kicks in. The flying portion of the gameplay doesn’t feel like quite the thrill being on the ground, but it’s successful in mixing things up in order to keep you engaged. I didn’t find the flying particularly challenging or interesting, but I still enjoyed it and am hopeful it will be fleshed out more in the full game.

In addition to jumping and flying, you’ll be faced with obstructions that require you to pull off split-second maneuvers in order to get through them. In one instance there was a pattern of lasers on the track that took a slice off of my car because I failed to avoid them. Apparently the vehicle can also take incremental damage, wherein you may lose pieces of your car but if it’s still functional you’ll keep moving. I literally had a third of my car lopped off by a laser but I kept going on three wheels, albeit at a slower speed. I didn’t get a chance to see if/how repairs are conducted in a race.

Distance feels like it’s going to be a decent, arcade style racer. The only complaint I walked away with from my short demo is a lackluster sense of speed. Sure, you can tell you’re moving fast, but in racing games it’s important to nail the thrill of blazing past objects. If the developers at Refract Studios can give the gameplay an adrenaline shot and provide a high-octane experience, I have no doubts that racing fans will eat Distance up.