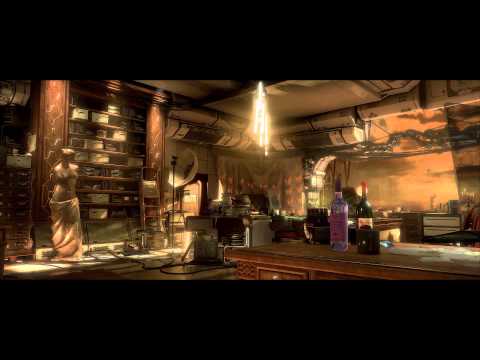 The year is 2029, just two years after the events of Deus Ex: Human Revolution. The world has changed. At the end of the previous game, augmented individuals lost control of their implants, causing a global catastrophe. Though the world is still recovering, the populous has descended into fear and racism, shunning augmented individuals into aug-only ghettos and favelas. As the developers at Eidos Montreal described it, it is a sort of mechanical apartheid.

Our hands-off E3 demo today was driven by none other than Executive Gameplay Director for the Deus Ex Universe, René-Martin Pauzé. Adam Jensen has joined Interpol as a part of Task Force 29, but he’s also working as a double agent as he’s come to believe that Task Force 29 is being manipulated by the Illuminati.

As Adam pulls into Praha station in Prague, we get a look at the state of the world. Soldiers are everywhere, as is an immediately recognizable oppression. We are meeting a contact here, and as she bumps into another pedestrian we also get to see some of the racism that has emerged against augmented persons. The person she bumps into seems apologetic until he notices one of her head implants and then recoils and calls her a “clanker”. The police step in and immediately asks for our papers, evocative of a Nazi Germany checkpoint. People are being scanned, armored soldiers in power suits menace the populous and make comments like “You brought this on yourself…” Adam makes a comment that treating people like animals will eventually cause them to act like animals, and true to form we turn and look at the entrance right as a terrorist blows up the front of the station with an explosive. The prime suspect is the leader of the Augmented Rights Coalition, or A.R.C. – Dr. Talos Rucker. We jump to a point later in the game where Adam has been given a mission to capture Miller, alive or dead.

At this point in the demo, the developers wanted to show us some of the combat and stealth improvements in Mankind Divided. Dropping in from our airship, we drop into the augmented ghetto tower of a place that looks not unlike a MegaCity block in Judge Dredd. Since a great many Deux Ex players prefer a stealthy approach, we get our first taste of that style.

There are a great deal of upgrades to help reinforce the quiet approach. EMP pistols will help you take out cameras and robotics, new mechanics now allow players to kill or disable from cover, and the Icarus has gotten a huge bump. The Icarus Dash allows you to surge forward rapidly, letting players zip across a huge expanse quietly, or it can be used offensively by dropping on enemies and transforming it to the Icarus Fall. This builds new verticality and better horizontal movement, which obviously informs the level design. A Tesla Gun augmentation allows you to take down up to four people with electric spikes. The smart vision augmentation gives you the ability to see more about your foes, including what sort of weapons they might be carrying, and a fresh hacking aug lets you remotely take control of computers or locks. Adam’s signature blades have gotten a bit of a bump in Mankind Divided, and we saw them used to great effect. The nanoblades can now impale foes, or be shot into a wall and then detonated as an area of effect.

For those of us who enjoy the hacking minigame, you’ll be happy to know that it’s received not only a cosmetic facelift, but also a far larger list of software attacks and defenses.

Switching through these weapons and ammunition types is now handled by a refreshed selection wheel. Changing ammunition turns your weapon sideways, allowing you to select specific-function rounds for your situation.

As the demo turns hostile we pull out the tactical shotgun. Using our augmented vision, we look over the landscape and begin to carve through our foes with blades, bullets, and close quarters combat. When the action gets too intense, we activate the Titan Shield augmentation, allowing Adam to become a human tank.

Our foes dispatched, we reach the Doctor, letting us see how social gameplay will factor into the title. The dialogue has been rebuilt to be reactive, taking into account the choices you’ve made. Better animations and facial representations are provided by the move to current consoles and PC, allowing players to more clearly see the results of their words. Dr. Rucker professes his innocence when we flatly state that we’ll be taking them in. At this point we have the option to chose to Patronize him, Justify our actions, or Turn Tables. He protests that A.R.C. is a non-violent organization, and again refuses to come in for questioning. He declares that he would rather martyr himself than be subjected to Interpol. We give him our word that we’ll ensure he’s treated fairly, but because we killed a great deal of his people on the way in, he doesn’t believe us. Pressing a button on his desk, he summons reinforcements but won’t live to see them — his augments begin to twist on him, crushing his body and killing him. Had we done better in the social gameplay, and made better choices, he may have helped us, or not called reinforcements altogether. Instead, now we have to scramble to find evidence before soldiers finish cutting through the room doors.

Swapping weapons and ammo types is more visual this time around.

Running and gunning our way through groups of foes, we light up an augment that slows down time, allowing us to obliterate our enemies where they stand. As we descend the tower we reach an elevator to the extraction point. As a swarm of flying bots attack our position, we rush to our airship and scramble inside just as more augmented soldiers drop in behind us. Turning back to see the massive augmented soldier from the freshly-released trailer (seen below) close in on our escape, our demo ends.

It’s just a guess, but I’m gonna say this guy might be a boss…

There is absolutely no doubt in my mind, thanks to this live demo, that Deus Ex: Mankind Divided is going to eclipse the stellar Human Revolution in every way. It was a very, very easy decision to nominate this game for both Game of the Show, and Best Action / Adventure game of E3 2015. Congratulations, Eidos Montreal — we can’t wait to see this game come to life when it ships on Xbox One, PlayStation 4, and PC in early 2016.