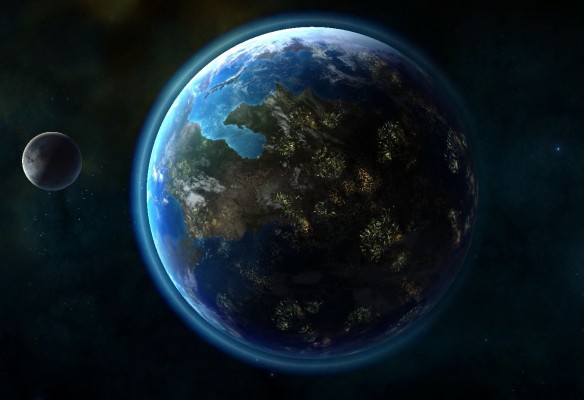 When people think of 4X games, there is one game that pretty much defined it — Masters of Orion. Much of what we see in modern 4X games have their roots in that title from 1993. While there were sequels, the original is still regarded as superior. When Atari folded it came as a surprise that Wargaming picked up the intellectual property, but seeing what they did with it was an even bigger surprise. It’s time once again to eXplore, eXpand, eXploit, and eXterminate with Masters of Orion: Conquer the Stars..

The first thing you should know is that Wargaming is as focused as ever on their World Of titles. This new entry into the Masters of Orion universe is being handled by NGD Studios in Buenos Aires. When the team heard that Wargaming had secured the rights, they came to them with a lot more than ideas — they had a functional demo ready to go for their first meeting. Clearly passionate about the project, they wanted to resurrect everything that was incredible about the original, but add and expand upon the concepts as well. I sat down with the team to get a deep look at the current state of the freshly-announced title.

The detail in ships is fantastic.

The first thing they assured me is that all ten of the original races were included. To ensure authenticity, they also contracted much of the original team leads, art designers, and composers to help bring it to life. For the demo we selected the Alkari. The first change I noticed is that each race now has an introduction, giving them a bit more personality and flavor all their own. The avian Alkari advisor for each emperor is fully voice acted. While the team was shy about revealing the full cast list (I think i heard Michael Dorn at one point), there is some solid talent at play. These advisors provide the tutorial functions, as well as a little comic relief for the more ‘animated’ races.

Our demo began on Altair IV — the Alkari homewold. As the small fleet orbited the planet, we zoomed out to see a massive galaxy to explore. Setting up your game you’ll choose between a small, medium, large, and huge galaxy, but also different types of structure. Nebulas, horseshoe, and other galaxy configurations will be available at launch.

There are several paths to victory in Master of Orion: Conquer the Stars, and not all of them involve conquest. In fact, there are five paths (an expansion on the original three) — Excellence, Conquest, Technological, Economic, and Diplomatic. An Excellence Victory is one where the powers in the universe have created a galactic council and elected you Supreme Leader, sealing an instant (albeit hard fought) victory. Similarly, an Economic, Technological, or Diplomatic victory will require supremacy over your foes without firing a shot. For those who enjoy the more direct approach, crushing your enemies beneath your boot is always a viable option.

If you play like I do, you like to win the accelerated tech race. In another vastly expanded feature, we see 75 tech groups, each with technology trees underneath. Food, production, morale, diplomatic abilities, and offensive / defensive technology for your fleet and planets await your precious research points, leading to the Planar Transcendence — the final research point that grants a Technological victory.

Back planetside, the team has given a bit more character to production queuing. Using a drag and drop system, you’ll move your researchers, farmers, and workers into their respective slots for whatever is needed, creating research, food, or faster production output as needed. Backing out from the planet, it was time to get to the explore part of our 4X.

In Masters of Orion, all of the planets are randomly generated, but also given a random state. They may be barren, have a high or low gravity, greatly varied in size, or even be lush with jungle life. Each race can use those states based on their physical traits, so what might cause problems for Humans, could be perfect for a Meeshon. Setting out with a scout, we found an anomaly. Anomalies represent a sort of ‘treasure chest’ in the universe, providing additional tech, cargo, resources, or even the occasional derelict ship. For fans of the original, you’ll be happy to know that Orion (and it’s Guardian) have returned, and incredible technology lies in wait should you manage to somehow conquer it. Random monsters also lie in wait — nobody said the exploration phase would be easy.

One of the most impressive part of the demo was one of the smallest things — planetary introductions during colonization. When you colonize a planet, the game procedurally generates a high quality cinematic to show you not only what you’ve done to the planet surface, but also the correct race, ship, and any other conditions such as volcanoes or toxicity. If you’ve ever played a 4X and watched the same generic cinematic hundreds of times, you’ll greatly appreciate this detail.

Diplomacy is for the weak.

I tend to micromanage when I play 4X titles, but that play style isn’t for everyone. The team at NGD realizes this and have provided a later tech in the game that allows players to install a governor for their planets, allowing him to take over and automate the types of production you specify. For those of us who enjoy handling every detail, though, all of the stat management and direct control is present and accounted for.

Leaving the planet, we got to see another aspect that would have great implications on Diplomacy and Conquest — wormholes. In MOO: CtS you can only reach other solar systems through star lanes. These wormholes create chokepoints by which you can restrict travel and trade. It also allows you to hole up and remain secretive, allowing you to create vast armadas under the cover of darkness. It will be interesting to see how the battles for these star lanes unfold on the long game.

There are also several types of star lanes. A blue star lane is a normal one, allowing ships to freely traverse it without danger. Red star lanes are unstable and will require special technology to enter it and not be destroyed. True black holes are as unstable as you might imagine, but they allow you to traverse the galaxy in a single step, leaping from one side to the other — an incredible advantage.

Mrrshan may be diplomatic, but at what cost?

Speaking of the long game, 4X titles tend to evolve over time, giving way to more complexity as your span of influence grows. In the interest of time, we jumped ahead to 163 years into the game. Not only have expanded our influence, but we have encountered several races which are now color coded on our map. Our star lanes are now defended by a new unit called a Star Base. Using a Space Factory (also a new unit), you can built bases with surveillance, guns, gas collectors that can sit near gas giants, and more. These can be created to blockade the star lanes, grab resources near their origin, and effectively create borders around your empire. Since other races cannot go past them without open borders permissions or destruction, you can imagine that landgrabs will be rewarded with force — don’t be greedy.

I can’t overstate just how much of a marked improvement the graphics in this title are over its namesake or sequels. The Darlok is menacing, and the Mrrshan is equal parts regal and seductive, again fully voiced, and now fully animated. Similarly, the GNN News network makes a return, and they are even more sarcastic than the original. Determined to give them something interesting to talk about, we dove headlong into combat.

When you engage in combat in MOO:CtS you’ll see your fleet on the left and the enemies on the right. The camera zooms in and gives you your statistical odds of victory. In this case, we were engaging in planetary bombardment, but there is a small change here — you can now stop whenever you’d like. This means you can bomb the denizens back to the stone age, or you can listen to their pleas (via a new reaction video) and halt your assault, earning you favor for your mercy.

If you are an original MOO fan like I am, the final bit of news in this very-complete demo was music to my ears. Much of the mods that fans built for the original are fully integrated into the game already. Full stat management, comparison charts, victory tracking, and much more are now simply part of the game. They are also pledging to be as mod friendly this time around as they can, encouraging players to find new ways to experience this incredible looking game.

A habitable world, ripe for conquest.

You end up seeing a lot of games during a trade show like E3, and there are certainly more reboots and sequels than you can shake a stick at, but there was a very clear difference that I spotted immediately with Masters of Orion: Conquer the Stars as soon as I walked in the room. It is very clear to me that both Wargaming and NGD Studios have a deep-seated passion for not only this IP but the 4X genre in general. If you are a fan, you have a lot to look forward to. If you aren’t a fan, or have never played a 4X title, there is no better game to begin with than the one that started it all.

Masters of Orion: Conquer the Stars is coming to PC. We’ll keep up with it’s progress and keep you posted as we learn more.