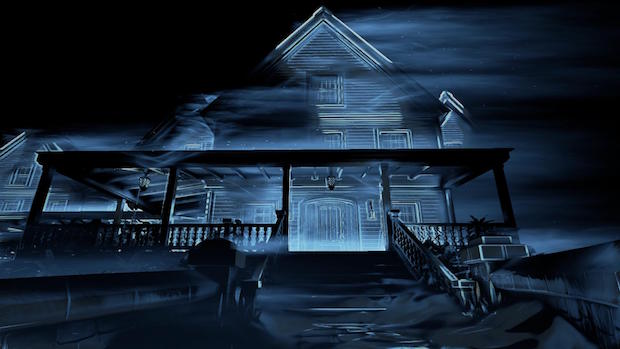 “Something unique”  is the main idea that drove ex-Irrational developer Bill Gardner when he began to flesh out Perception. Gardner is a self-admitted fan of the horror genre, but he prefers tense, nail-biting atmosphere as opposed to the Saw/Hostel-style jump scares and brutality. That love of tension is coming through in Perception, which places you in the shoes of Cassie, a blind woman who has recently been struggling through terrible nightmares. These rough dreams involve a certain house, and once she finds out that building actually exists, she sets out to find it.

Her story truly begins as she approaches the home while talking on a cell phone. She elicits a dulcet, worriless tone. Cassie then spouts a few joking lines of dialogue as she knocks on the door knowing that no one would answer. As you enter, you see that your vision doesn’t extend outwards until you take a step, an incredibly clever way to integrate Cassie’s vision deficiency. As you move, a small bit of vision will jot out in front of you, never extending too far, but just enough to see what you are walking into. In the early game, this is toyed with in some really interesting ways, such as seeing a crackling fire that constantly emits light, or opening and re-opening doors to get a better sense of your surroundings.

If you do find yourself getting stuck, there is an easier way to reveal the environment around you. By pressing the right trigger, you emit a ping that quickly shows a dim version of what is in front of you, as well as highlights doors and objects you can interact with. Being able to do this throughout the entire game would break the immersion a bit, which is where the creature roaming around the house comes into play.

While what exactly this creature is remains unknown to the protagonist (and player), it is slowly traipsing around the home, opening doors and searching every crevice in hopes of finding prey. Since it senses only sound, using the aforementioned pings can put you at great risk. Not only that, but making any kind of noise can lead to death. One tactic I used to reveal some of the environment was to pick up a book and launch it across the room, then when it smacks against the wall I could get a quick glimpse of my surroundings. But doing so is also putting myself at extreme risk; this is the intelligent way that Perception challenges you to play as true to your protagonist’s experience as possible.

No proper horror experience is going to reach the top without excellent sound design, which is in full display with Perception. Even on the bustling show floor of PAX, every creak and footstep felt like it was right beside me. While there seem to be little in the form of jump scares, the use of loud, assaulting sound can add to the uncomfortable nature of certain sequences. The combination of having little sense of what is around you, combined with some kind of nasty noise filling your head, is extremely terrifying and something I have never experienced in a video game before.

As with many first-person narrative experiences, there are more than a few things strewn about the world of Perception that you will want to pick up and examine. There are books to handle, radio tapes to play, and even written out notes. Since Cassie can’t see them, she uses a text-to-speech app on her phone to translate. As with the use of your vision, this is a brilliant little touch to put you into Cassie’s shoes. In such a unique experience, there are so many ways that the player could potentially be emotionally pulled out of the game, but Perception easily navigates away from them at every step, only entrenching you more into pure horror.

While Perception is billed as a horror game, it seems to be far more than that. It’s a narrative heavy wonder that puts you in the shoes of a strong protagonist just trying to figure her life out. Despite suffering from blindness, she doesn’t make excuses, only jokes and goes on with trying to complete her objective, which is to find out what the hell is going on at this house. Its this respect to their main character, on top of the exquisite mechanics that makes Perception feel like a truly unique experience that just plain works.