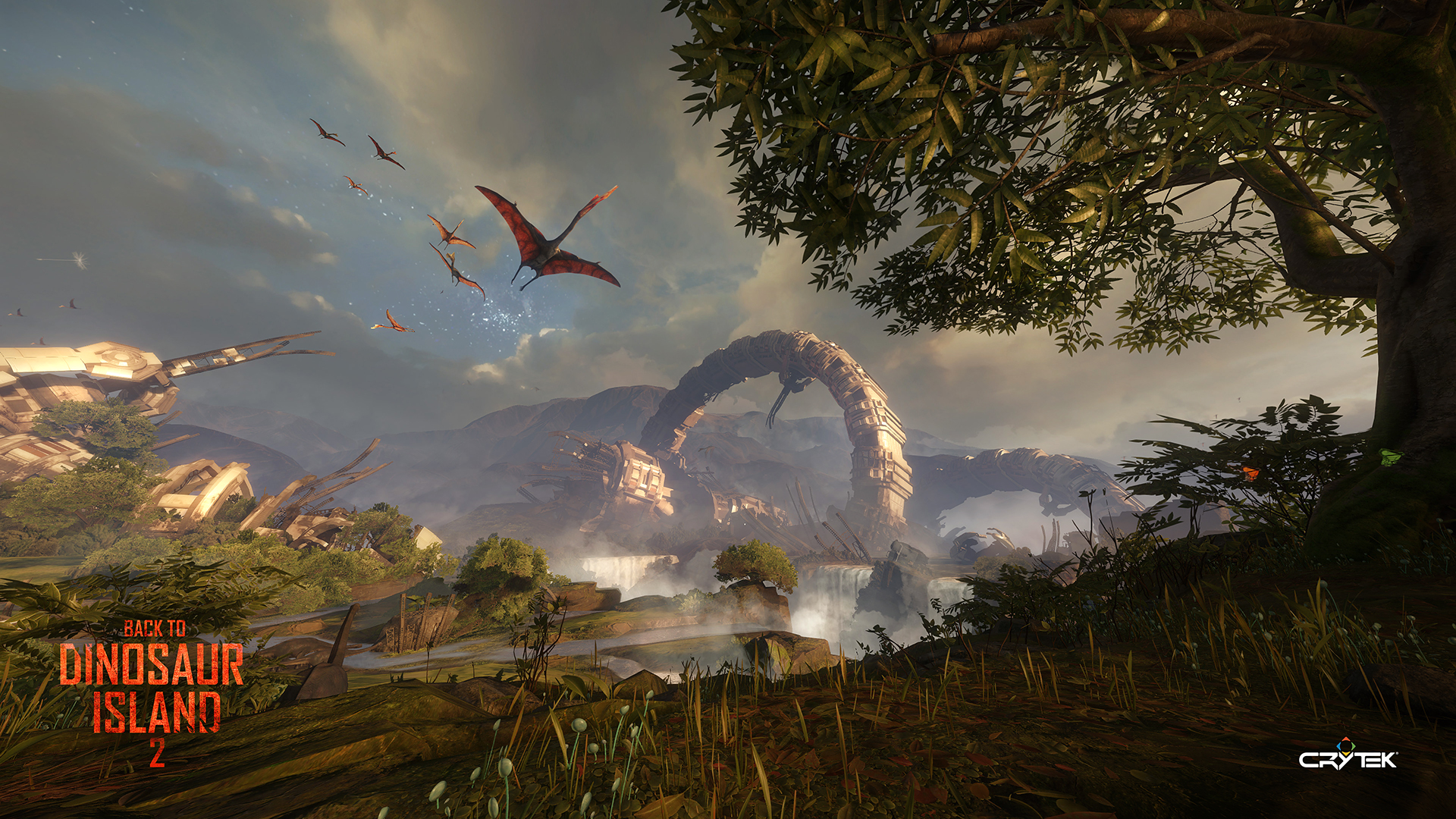 Despite its prevalence across the video game world, I had never played a virtual reality game. That is, until my hands were upon Crytek’s newest foray into virtual reality. The folks at Crytek have been hard at work building their virtual reality prevalence. It began when they showed off Back to Dinosaur Island, a demo that had you looking around and watching dinosaurs. They have recently built upon that with the Back to Dinosaur Island 2 tech demo, which was shown off at E3 2015. Once you have the Oculus headset strapped around your head, you are thrown onto the side of a mountain.

From there, you begin to climb up said mountain via zip lines. You eventually run out of line and have to look around in order to grab the handles of your next zip to hold onto. While progressing through these movements, you get to move your head around and see dinosaurs surrounding you. The dinosaurs will circle you, make horrifying noises toward you, and even interact with one another. Whilst climbing the mountain, you can stop, look forward and ogle the beautiful flowers growing on the rocks in front of you. You can even hold the right trigger to keep hold of the zip line, let go of the left trigger, and reach out to touch the hanging petals.

While crawling up the mountains, you will see the dinosaurs begin to hover around you. These situations will bring about smaller stories within themselves. For example, one mother dinosaur was making clear movements toward her child to try not to fly yet. As sons do, he did not mind and instead hopped into the air to fly. He struggled at first, but eventually began soaring. It is a very simple and quick story, but it gave off a lot of heart and really engrossed you further into the beautiful experience.

Once you get on top of the mountain, you are revealed to a full world filled with things to scan. You do so by resting your focus on the item of interest for a few seconds. Once you have scanned whatever is on the horizon, an AI will then provide more information in your ear. These pieces of information range from details regarding how a certain dinosaur will harm you, all the way to atmospheric notes on the environments ahead of you.

This will act as one of the biggest gameplay cruxes when Crytek releases their first full virtual reality experience entitled Robinson: The Journey. Robinson has only been in development for a few months, but the early concept has been built directly off of the success for Back to Dinosaur Island 2. As you may expect, Robinson: The Journey will focus on one man named Robinson and his adventure through a dinosaur-infested world. Along the way you will run into a host of dinosaurs that have no lack of personality.

Despite its early stages, I was very curious as to what the story of Robinson would entail. Most importantly, how do you handle narrative in a virtual reality game where cutscenes may prove unwieldy? As of right now, Crytek’s answer to that is the aforementioned artificial intelligence that will speak in your ear about your surrounding environments. As you scan different parts of the environment, you will unveil more and more about the situation around you. Crytek stated that they are not committed to the artificial intelligence just yet, but it will be something similar to that propelling the story.

As the virtual reality world is continuing to evolve, it was only a matter of time before Crytek unleashed the Cry Engine onto the tiny little screens. The Cry Engine has obviously produced some gorgeous projects in the past, and the same should be expected of Robinson: The Journey upon its release, especially if the art style is similar to Back to Dinosaur Island 2. Flowers fall beautifully, there is a large draw distance, plus there are a host of dinosaurs surrounding you. Expanding on Back to Dinosaur Island 2 could lead to some gorgeous visuals.

Robinson: The Journey is still a while away, but the promise is quite high as Crytek seems to be heading upwards with their virtual reality experiment. Although Back to Dinosaur Island 2 is not a full game, it does give you a great few minutes. After the minutes are over, you realize that expounding upon this concept could make for a really enjoyable experience. If you combine that with the mysterious story surrounding the character of Robinson, possibilities are endless. I will bring the Oculus, you bring the dinosaurs.