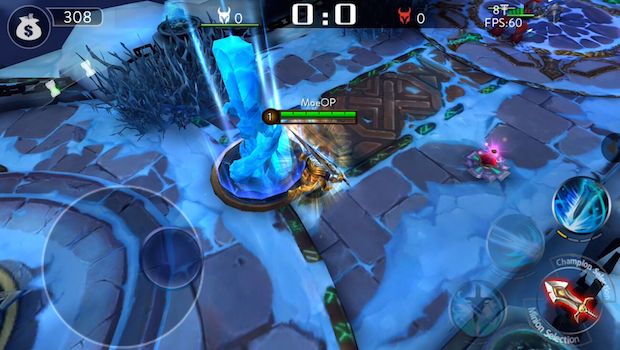 Condensing the MOBA experience to the mobile format is no easy undertaking; the genre doesn’t exactly lend itself to short play sessions or the casual “pick-up-and-play” of most mobile games. GAEA Mobile is trying to change that, though, and after spending some time with Ace of Arenas at E3 last week, I’m cautiously optimistic they can do it.

The biggest initial change made is in the modes available. Ace of Arenas offers several different game types, ranging from the competitive 3-on-3 to 1v1 and bot matches. While you’ll need a data or Wi-Fi connection to match against other players, bot matches provide a nice offline solution to keeping your skills honed.

There’s a plethora of modes and game types to play.

Still, MOBAs are competitive by nature, and the real meat of the game is in the PvP. I played mostly on the 1v1 map, where I faced off against a bot and had to reach a victory condition before they did. Those familiar with “1v1 mid” match-ups will feel right at home: to win, I had to either farm 50 creeps first, kill the enemy six times, or destroy their core. It was standard, but great for a quick burst of gameplay without the gradual build-up of a full match.

Controls are handled pretty well in Ace of Arenas, most notably skillshot implementation. A radial circle on the left side controls movement, while an ability wheel on the right handles auto-attacking and abilities. If the ability is a skillshot, a radial dial will appear, allowing you to aim or drag outside the circle to cancel. It lacks the finesse of a mouse and keyboard, but even on a phone, I was surprised at how quickly I adjusted and was able to execute quick skillshots on the fly.

The toggle between creep and champ target in the bottom-right is initially confusing, but ends up being a greatly useful tool.

As for character selection, there’s a wide variety of champions available to play as. Those familiar with games like League of Legends or Dota 2 will be very familiar with these champions, and in some cases, maybe a bit too familiar. Some characters come off as strikingly familiar, like a little girl who summons flaming teddy bears, a butcher with a giant meat hook, and a small creature who uses toxic poison and places invisible traps.

There’s still fun to be had in retreading familiar ground, but there’s a good number of champions that take heavy inspiration from other titles. It’s a little disappointing, too, because Ace of Arenas most impressed me when their champions had new or interesting ideas.

Champions go through free rotations each week, so you’ll have a crack at every one of them eventually.

The first champ I played as, Aurora, had a really cool set of abilities that focused on both attacking and being attacked to inflict Possessed Oath upon enemies; these Oath charges could then be used in conjunction with Aurora’s other abilities to increase the power of her attacks. She always ran a dangerous line between being a squishy mage and wanting to tank to inflict extra Oath charges, and it was really engaging to gradually learn that balance.

You can further influence Aurora and other champions’ abilities with talents and gems, two systems that will also be very familiar to MOBA vets. Talents increase certain champion’s effective abilities and are earned by playing that champion, while gems can be bought with in-game or purchased currency to further enhance certain characteristics, similar to runes in League of Legends. Champions can also be purchased with the same currencies, or you can choose to just stick to whoever’s available on the free week rotation.

The talent tree lets you branch and specialize in areas you want to.

Ace of Arenas does look to be a capable competitor in the mobile MOBA landscape, and it has all the trappings to pull in fans of other genre titles. It has just enough grind to keep you engaged without overwhelming, there’s plenty of modes and game types to bring variety, and I’m hopeful that as new champions release we’ll see new concepts and designs that grow a unique appeal for the title. It’s still a ways off from full release, but Ace of Arenas is certainly one to keep an eye on for those craving competitive creep farming in the palm of their hand.