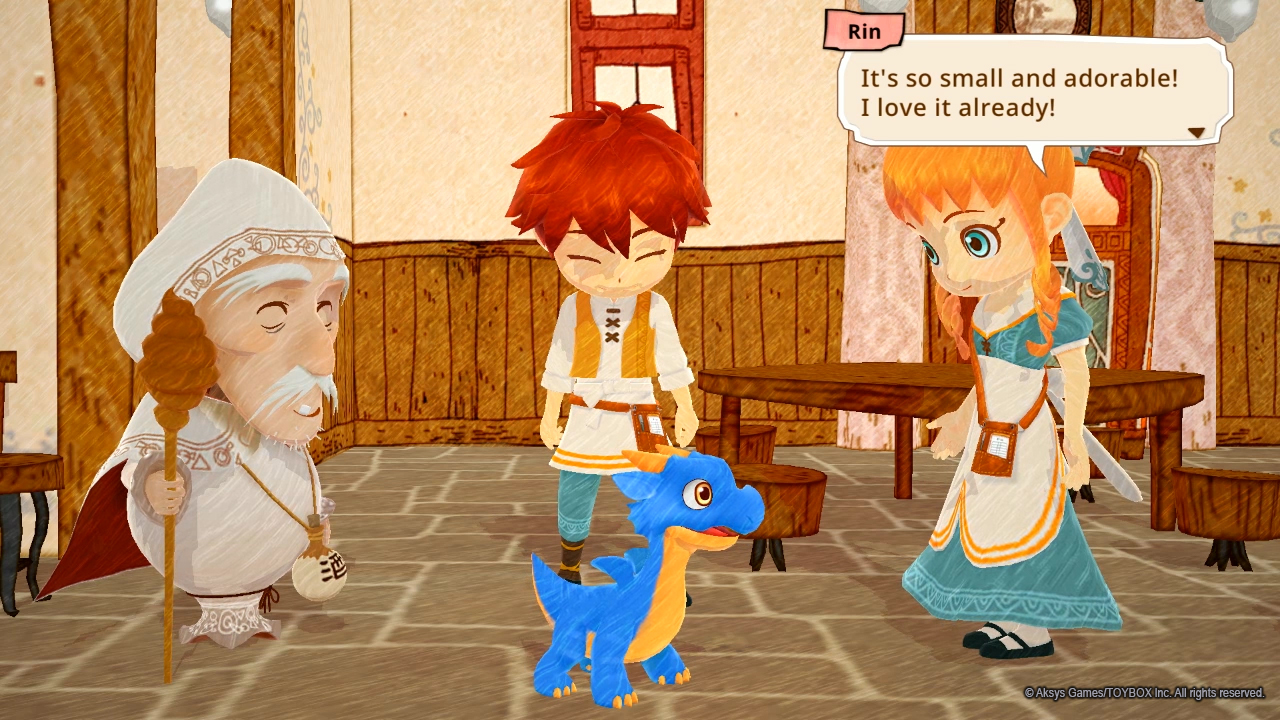 We first heard about Little Dragons Café one short month ago, an announcement which included nothing more than a logo and a single image. Given how little had been previously released, I was curious as to how much we’d actually get to see when Akses games announced a first look at Little Dragons Café during GDC. However, given that Yasuhiro Wada, is the mind behind the Bokujō Monogatari series (previously known Harvest Moon, now released as Story of Seasons in America), it was an opportunity not to be missed. Imagine my surprise when Wada himself not only demoed the game, but passed around Switch consoles so we could play Little Dragons Café ourselves!

Little Dragons Café tells the story of twins who must take over the family cafe and care for a rather peculiar pet in order to save their mother. Featuring adorable characters, a storybook art style, and a pet dragon to care for, this adventuring simulation game seems to have all the charm necessary to rival the iconic Boku series.

…maybe we shouldn’t answer that question…

The game opens with some basic tutorials about how to gather supplies, cook, serve customers, and keep shop. Right off the bat, you’ll pick which of the twins, male or female, that you want to play as, and the other will become your assistant, managing the store while you go off adventuring. When your mother mysteriously falls ill, a strange man appears and offers them a magical egg.

“This man shows up, and he tells them they need to take care of this egg to save their mother — that’s all they know,” Wada explained through a translator. With no other leads as to how to cure their mother, the children take on the responsibility of raising the newly-hatched baby dragon and keeping their mother’s beloved cafe up and running in her absence.

“The cafe starts off small,” Wada warned, pointing to the restaurant on the screen, “but it gets bigger as you advance.” By expanding your stock, recipe collection, and clientele, you’ll increase your fame, reputation, and your menu. Fortunately, your cafe is surrounded by the bounties of nature, so you won’t need to negotiate expensive imports; everything you’ll need to cook can be collected, grown, or hunted in the area around the restaurant itself.

The other good news is that you don’t need special dragon food to see your little red-scaled (or blue-scaled, no word yet on how you get a red vs blue dragon) buddy grow up happy and healthy. Apparently, dragons thrive just fine on a diet of people food, so feel free to feed him anything you whip up in the cafe and he’ll be delighted! Proper care and feeding of your dragon is important, not just because seeing all the wriggles and tail wags of a happy dragon is a reward in and of itself, but because well-fed dragons grow and develop new abilities. As he grows, your dragon will become bigger and more capable of helping you forage. From hunting to flying to previously inaccessible parts of the island, your scaly companion is a vital part of the game.

Of course, the dragon is only one part of the game–you’ve also got a cafe to manage! Fortunately, you’ll eventually build up a whole crew capable of helping you cook, serve, and charm guests. At first it will only be you and your twin sibling, but eventually a number of miscreants will wash up on your corner of the world, and some will even join your ranks as cafe staff. Wada talked about your job as a cafe owner is to be a kind of gastro-therapist, “By creating food they want, you’ll help them to deal with their problems.”

The game simply oozes charm, from the sketchy textures to the storybook, paper doll feeling of the interior of the cafe. The world beyond is brightly colored, complete with day/night cycles and some truly lovely sunrises and sunsets. Foraging for eggs, tending to gardens, hunting recipe fragments, and even calling upon your dragon to headbutt wildlife which happens to be made of delicious meat should more than keep any busy, but you’ll still want to backtrack and scold your employees if you receive the notification that they’ve been slacking.

Once you’ve found enough recipe fragments, you’ll be able to create a new dish which you’ll need to cook it by participating in a brief, rhythm-based mini game. Once cooked, you can add the dish to your menu, expanding your culinary skills and attracting new customers. Expand your culinary arsenal and keep your baby dragon well fed, and you’ll see your little buddy grow in size, charms, and abilities, allowing you to get your Daenerys Targaryen on, and ride your dragon into the sky in your quest for newer, fresher ingredients.

Little Dragons Café soars onto PlayStation 4 and Nintendo Switch on August 24th. It will come in both a standard edition and a special edition, which comes with a host of as-of-yet unannounced goodies, including an adorable and very cuddly limited edition nine inch baby dragon plush toy. Check out the official Little Dragon Cafe website for more information!