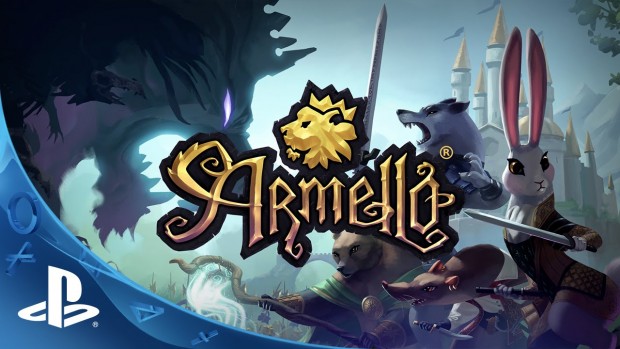 When it comes to certain genres, some games just don’t play well using a controller. Chief among them are strategy games and board games, which are usually plagued by a poorly translated control scheme that hinders your ability to move around a battlefield efficiently.

After some hands-on time with Armello, a strategy-based digital board game with a recently announced PS4 release, it’s obvious that developer League of Geeks aims to make the transition to console as smooth as possible. As someone who has mostly avoided this type of game on consoles due to awkward playability, I found the E3 demo played well and was an experience that felt easy to pick up and play. Couple the intuitive controls with intriguing gameplay that is simple to learn and difficult to master, Armello shows great promise.

At its heart, Armello is a fight for power. Players will take turns moving around a game board, recruiting followers, earning prestige, and competing with opponents in a race to dethrone the lion king to claim the crown for themselves. While navigating the battlefield’s hexagonal tiles, players can use their environment and their abilities to maximize their combat potential.

It’s also not uncommon for players to temporarily form alliances that are mutually beneficial to both heroes, but with the suspense of knowing that at some point, the partnership will crumble in the quest for the crown. With a total of eight different animal heroes to choose from, the developers describe the game as Kung Fu Panda meets Game of Thrones – a description that feels satisfyingly accurate given the rampant potential for betrayal in the name of power.

One of the key stats that players need to build is prestige. Representing a player’s favor with the population, growing this stat is essential when trying to usurp the throne. This component can fluctuate depending on your interactions and victory against the current king cannot be achieved until enough prestige has been earned. A hero can challenge the king at any time, but without a high enough level of prestige, the king will make short work of them, meaning it is in the player’s best interest to build this stat while waiting for an opportune moment to arise.

Much of the gameplay is driven by game cards, which can help to provide buffs for your hero, as well as hinder the stats of your opponents. These cards can make the difference between taking down an opponent player and being sent back to square one, so using the right card at the right time is essential. Adding yet another layer of strategy, all players pull from the same deck of 120 cards and can see the cards of their opponents. This means that more experienced players might find themselves counting cards in the hopes that a certain unplayed trump card will be pulled from the deck at an opportune moment to help turn the tide in the conflict. It all contributes to that element of strategy where power can shift quickly.

It is also worth noting that Armello features only a single game board layout, but each tile is randomly generated with every new match. The king’s palace will always be located at the center of the board, but with eight different tiles types, ranging from swamps (which can hinder your stats) to forests (which can conceal your location), players won’t just pull from the same play book every time they play; tactics will always need to adapt.

Lastly it’s worth pointing out that Armello’s visuals are stunning. With an appearance that represents a cartoonish fantasy world, the bright and colorful palette is beautiful to behold. It certainly doesn’t push the limits of the PS4, but for a simple digital board game like this, Armello’s visuals fit the theme wonderfully. Coupled with an entertaining soundtrack coming from Michael Allen and Lisa Gerrard (Gladiator, Baraka, Dead Can Dance), Armello has a very charming presentation.

My playtime with Armello was brief, but it was apparent that there’s a deep level of strategy beneath its approachable gameplay. There’s admittedly a lot to take in all at once, but after a few rounds, the game has a great deal of potential to become an entertaining multiplayer experience.

League of Geeks aims to release Armello on PS4 this September. For more on Armello, as well as all of our other E3 coverage, be sure to check back to Gaming Trend.