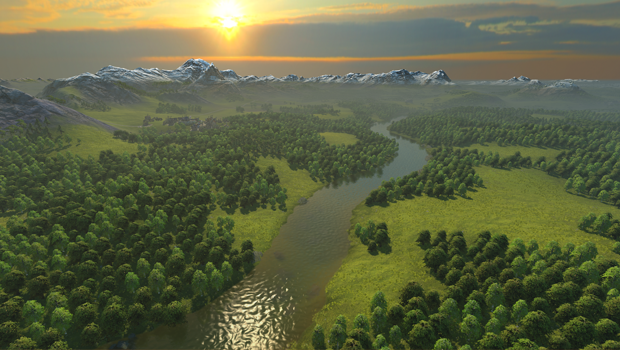 Earlier this week, I went to a Kalypso press event where I got to see a demo of Grand Ages: Medieval. It’s being developed by Gaming Minds Studios, who created the Patrician and Port Royale series as well as the award winning Rise of Venice.

Grand Ages: Medieval is a real-time strategy game set in 1050 AD Europe. “In the high middle ages, the development of Europe has seen an unprecedented level of progress, and the population spreads across the continent,” said Sebastian Walter, one of the developers.

You play as a humble mayor with high aspirations of ruling as much of the continent as you can, and “it is your job to lead your people to greatness.”

The world has a huge area to take control over, boasting a 30 million square kilometer map modeled to look exactly like the European continent. There are no loading screens between zooming in and out on cities, which gives you a real scope of just how huge the in-game world is. Add on the ability to see all the way to the horizon in every direction at the town level, and you’ve got a game with absolutely awe-inspiring breadth.

“To gain more influence all over Europe, you need to get more people into your town,” Walter said. Gaining followers is as simple as providing them with things like food, clothes, and luxuries. These can be acquired by harvesting and trading. In the demo, Walter showed the town building, which was as easy as sending a settler out, founding a city, and building a road to it. Within minutes, he was able to begin trade between his two small towns.

There are 20 goods to trade, and each one is transported and consumed by the AI as well as player cities. Walter promised there would be no resource cheating by the computer controlled opponents like in the harder difficulties of games like Civilization.

Interacting with other cities is simple as well; just send a scout behind neutral city walls and you can begin discussing trade agreements, and if a city’s people like you enough you can even peacefully take control of a city, for a hefty price to that city’s mayor of course. Keeping track of your alliances with neutral factions is extremely important, because war is a very complex affair.

“Military force always has the negative effect that the town will pretty much be ruined,” Walter said, “A lot of citizens will die and you’ll have to build up the town from the ground.”

Military units also require constant upkeep in order to keep morale up, instead of the one-time cost of units in other RTS games like Starcraft. If you fail to get the troops food or clothes, then their morale drops. If a unit’s morale drops too low, then they’ll retreat to one of your cities. “You’re only capable of doing ware if you have a pretty stable commercial system running in the background.”

Weather events, such as storms, volcanoes, and earthquakes, will pop up randomly to mess up your perfectly concocted plans as well. “There are a lot of unknown circumstances which will affect the growth of your population.”

Walter promised the campaign lasts 8-12 hours, then gives the player the option to keep playing eternally with the same game after that. He said, “Afterwards you’ll have all the knowledge and all the tools in your hand to go on and be able extend your empire.”

Grand Ages: Medieval will feature online and offline multiplayer with up to eight players and matches ranging from 30 minutes to “endless time.” Endless games can be stopped and started at any time, and in case your friend can’t make it over for the LAN party, you can keep playing with the hotswap feature.

Hotswap allows player’s cities to be managed by AI when the player can’t, and the rightful mayor can join in at any time. I didn’t get to see hotswapping in action at the demo, but it’s a very promising feature which will allow games to truly go on forever between friends. Hopefully in ten years, we’ll hear about the “World’s Longest Game of Grand Ages: Medieval.”