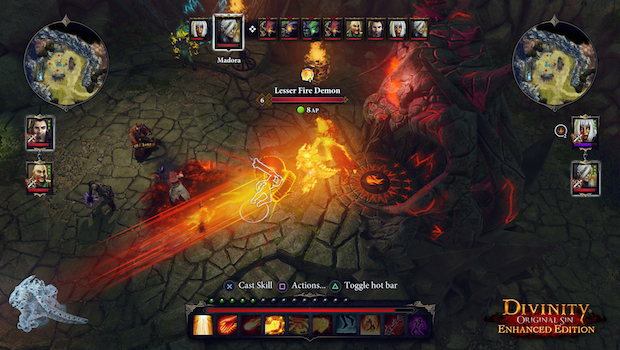 Divinity: Original Sin was a smash hit on PC, coming in the summer gaming drought to revitalize CRPG players with a breath of fresh air. It was really enjoyable, and though it certainly wasn’t perfect, it was the right game at the right time for a large subset of gamers.

With the Enhanced Edition, though, Larian Studios has decided to take its game and rework it completely, fixing any issues and building up everything they wanted to do but never had the chance to, all for home consoles to enjoy. Enhanced Edition of Original Sin is also coming to PC through a free update, but I had a chance to demo the PS4 build of it, and was blown away by the lengths Larian has gone to make Divinity not only feel right at home on a controller, but designed for it.

Splitscreen is extremely useful in co-op, allowing a sense of scale in co-op that is unlike most.

One of the coolest features of Divinity: Original Sin was the way it handled the dual protagonists. They could work in tandem or separately, could meet up to swap information and items, and genuinely felt like a cooperating duo, rather than a single hivemind. This feature is really interesting in single player, but the local co-op in Enhanced Edition furthers that experience even more.

Though on opposite sides of the map, the two players can still work towards similar goals.

Players can each develop their own character with their own personality, and create cooperation or conflict themselves. The other two NPC party members can be split between the two protagonists for party organization, and both players can act and move separately, across the entire map. One could be touring a dungeon while another goes into town, looking for clues. Battle can also take place separately between the characters, allowing for total autonomy or brilliant cooperation.

Skills have been completely revamped, sorted into different tiers that denote their power and efficacy. Master Skills are the highest tier, and I got to see a couple of the endgame Master Skills that ranged from arrow barrages to meteor showers. Tiering off the skills allows for a natural progression, and it feels like there’s genuine power curves throughout the game.

Each player can engage in their own separate battles.

Dual-wield is available for every single-handed weapon, from knives to wands and everything in between, and I got to check out a new companion who took advantage of that dual wielding. He was a vicious rogue who took advantage of positioning and quick attacks, taking down enemies in rapid succession.

Controlling a CRPG with a controller might sound odd, but the changes made to Divinity’s controls to accommodate controllers are natural and really intuitive. You move with the left stick, but clicking that stick in gives you control of a cursor similar to a mouse. Holding the X button in lets you expand a circle around your character, letting you search everything within the area. Skills are assigned to a hot bar, allowing you to quickly flip between them out of combat or easily see what tools you have available in combat.

Working in tandem to solve problems, like distracting guards for another player, is both fun and intuitive.

A new difficulty mode has been added as well, called Tactician Mode, which changes enemy placement, behavior, skills, and challenge, crafting an even harder campaign for those who want a new mountain to climb. Information is more readily available with the examine function, though – you can examine monsters in battle to see their stats and weaknesses, giving you a much clearer approach to each battle.

Divinity: Original Sin was an amazing game on PC, but with the jump to consoles made in Enhanced Edition, it could become one of the best options for couch co-op RPGs. The revamped systems clean up and smooth out a lot of the issues found previously, and there’s a host of new endgame content to make the ending even more epic. Enhanced Edition