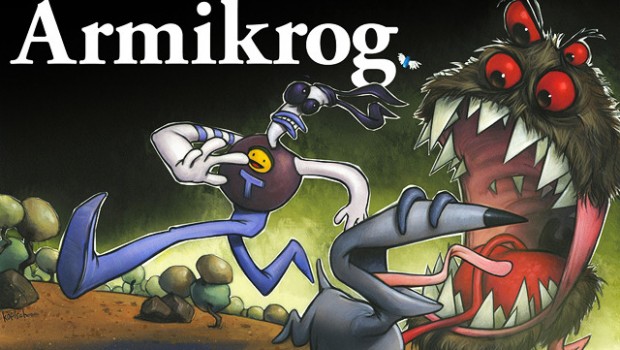 Armikrog is as weird and unique as its’ name, but in a charming way. Being developed by the creators of the Neverhood series and Earthworm Jim it is chock-full of humor and wonder. Although the build I played is in very early stages, and much was missing, I came out wanting more and excited to see a more polished version.

With characters created by Doug TenNapel, much of Armikrog’s appeal comes from its atmosphere and visuals. Using, an almost dead, stop-motion/claymation graphic style gives a major dose of nostalgia for games in the 90’s. It almost instantly feels like a spiritual predecessor to the Neverhood series, which it kind of is. The overall atmosphere is full of child-like wonder and has such a unique and old-school style that pulls you in, but never takes itself too seriously.

The story and characters also give Armikrog an appealing charm. When a space explorer named Tommynaut and his alien dog crash land on an alien planet they end up being locked in a mysterious fortress called Armikrog. Filled with tongue-in-cheek writing and some humorous situations, the monster in the intro is amazing.  While the story is  not yet  fully implemented, it is already fantastic. It leads to some fun and visually appealing moments.

Armikrog is, at its heart, a point and click adventure game with some fun and challenging puzzles. About 10 minutes in I become very lost and frustrated, but when I overcame the puzzle I instantly felt that satisfaction from overcoming a tough obstacle. The game can be challenging but the overall style and tongue in cheek writing makes it feel fun, even when you become stuck. I constantly wanted to move forward and see what this alien world had to hold, and not just moving forward because I had to.

Although the game is still in early development it seems to be on the right path for a fun adventure game filled to the brim with humor and charisma. There isn’t a set release date but it is definitely a game to watch for, as I anxiously await the final version.