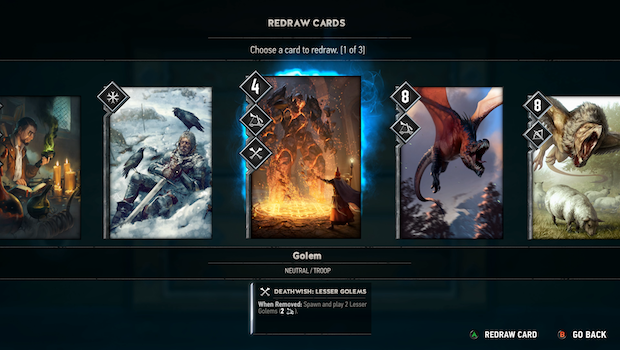 Gwent is bigger than it has any reason to be.

It was that way in The Witcher 3: Wild Hunt, where a relatively small card game-turned-side quest became a cult classic among players. Now, the same developers are working on a complete standalone game.

After a demo of the single-player campaign, a couple matches against real people, and a chat with Damien Monnier, lead designer of Gwent (who also designed the original version included in Wild Hunt), I’m absolutely floored.

The easiest way to sate fan’s desires (which could only be described as “ravenous” by the display of request emails CD Projekt Red displayed prior to the demo) would have been to simply create a Gwent that could be played anywhere. Detach the game as-is from Wild Hunt, build in a halfway-decent client and matchmaking system, and call it done.

That wasn’t how Gwent’s development ended up going, however. As Monnier describes it to me, Gwent isn’t just a pet project for the small group that developed it during the studio’s work on Wild Hunt, but has become a “passion project” for the entirety of CD Projekt Red.

As the standalone was being developed, lead writers at the studio volunteered their talents for a story mode. Quest designers stepped in, to create new exploits to engage with in the campaign. Artists put their pens to work, putting together new pieces and assets for cards both new and old. Even the voice actors from Wild Hunt return, with Doug Cockle taking on the grisly tones of Geralt of Rivia once again.

So now besides just matchmaking with friends, Gwent includes a fully voiced, fully animated campaign, set in an open world where you can follow the main quest or get sidetracked, lost in exterior adventures. In the demo we saw, the player was on their way to the next story quest marker, but stopped at some ruins while walking across the top-down overworld map. At these ruins, they could choose to investigate further, or avoid the dangers that curiosity could entail.

These choices will exist throughout the campaign, according to CD Projekt Red, and range from mundane to dire. In this circumstance, the adventurers found an ancient relic, capable of annihilating almost any foe. The result was that a new card, Scorched Earth, was added to their deck, capable of annihilating the strongest card on both sides of the field when played.

It’s an incredible start, and especially strange considering Gwent: The Witcher Card Game will be a free-to-play title. As Monnier went on in our interview, he began describing concepts the team was working on like “puzzle matches,” which could pit the player against overwhelming odds or strange conditions. In one, you might be facing a member of the Wild Hunt, who will already be on the field himself alongside two warriors, and the field would already be frosted. In another, you might be facing a unique opponent with their own special abilities, like a monster hero that can enter the battlefield every turn.

Of course, at its heart Gwent is competitive, and moving to an arena where players can use these decks against each other can create issues. Monnier says the original Gwent, as it was in Wild Hunt, is a literal “pay-to-win” game; your deck progress is intended to mirror Geralt’s progress, and as you buy better cards with gold and win more in matches, you can reach a point where your Gwent deck is always going to win.

In the standalone Gwent, Monnier and his team had to re-assess many aspects. Restrictions are imposed on the number of heroes you can use in competitive play, spies have been reworked, and concepts like the Skellige deck have been more fleshed out. The idea, Monnier tells me, was to improve on Gwent without losing the core of what originally drew fans in.

“Before we add new things, I want us to already play with the toys we have,” said Monnier. “We have weather, so what happens if someone plays weather? What if a creature gets buffed?”

The new Gwent, then, is a much more careful and active game. Cards have incredible synergy, whereas before they felt gated by Wild Hunt’s internal power curve. In The Witcher 3, you’re supposed to gradually increase in power, and early cards reflect that, acting as throwaway grunts not worth a slot in your deck. Here, cards have incredible new effects, and even peon-esque cards like Drowners, Nekkers, or Blue Stripe Commandos can win a round.

Take, for example, the Drowners. The new playstyle of the Monsters deck is all about two core aspects: bad weather and big power. These feral monstrosities thrive in bad weather, often getting buffed by it, and the Monster passive effect lets you keep your biggest hitter on the field after each turn. So your opponent might be considering playing a rain effect, to block out one of your rows and secure the round — but if you have any Drowners in your graveyard, they’ll instantly return to play when your enemy plays it.

Rebalances and a gorgeous new user interface have made Gwent cleaner and easier to play, and all the charm and character of the Witcher lore is there. (A highlight of my playtime with the game was finding a Roach card, which features the beloved horse standing on top of a house as a puzzled Geralt is trying to work out how it got up there.) But Gwent is not alone in this landscape anymore.

Hearthstone continues to be a pillar of the free-to-play landscape, bringing in esports competitions and tons of revenue. Bethesda is bringing one of its most popular franchises into the mix with Elder Scrolls Legends. Even Clash Royale could be considered a pseudo-card game, and it’s been dominating the free charts on mobile devices for some time.

Monnier told me his team doesn’t care, however. People will play how they want, and CD Projekt Red will continue to do what they do: create games they love.

“We’re doing our thing,” said Monnier. “There’s no reason why you can’t enjoy both. Let alone they’re differently games. […] If you like just Gwent, that’s fine. If you don’t, that’s fine as well. For us, it’s about doing the best we can on this project, and just having a blast doing it.”

The passion shows, though, in every aspect. Little details accentuate card art, and even signify character’s specific abilities. Ciri’s Blink variant lets her return to your hand after each battle, while Roach’s card lets him re-appear on the field every time a hero card is played. A massive single-player campaign, a simple but effectively redesigned interface for play, and CD Projekt Red’s continued avoidance of microtransactions. (Monnier assured me that Gwent would never introduce “pay-to-win mechanics.”)

Even further, Gwent will be coming to Xbox One and PC with cross-play compatibility, letting players freely download and play against each other on both platforms. PlayStation 4 will also be getting Gwent, although at this time, the team couldn’t confirm any crossplay on that platform.

Gwent was a side-quest, a pet project meant to simply flesh out another aspect of the massive lore found within the Witcher universe. It would have been easy to expect a simple port, a by-the-numbers adaptation that sated base interest and little else. Yet I walked away from my demo thoroughly impressed, wanting to experiment even more with the new cards, new compositions, new potential. Card games may be a crowded landscape, a known quantity, but CD Projekt Red looks poised to overturn that outlook with a product that’s incredibly in-depth, polished, and simply put, a damn good time.

Look for more on Gwent: The Witcher Card Game as we approach the closed beta in September 2017.